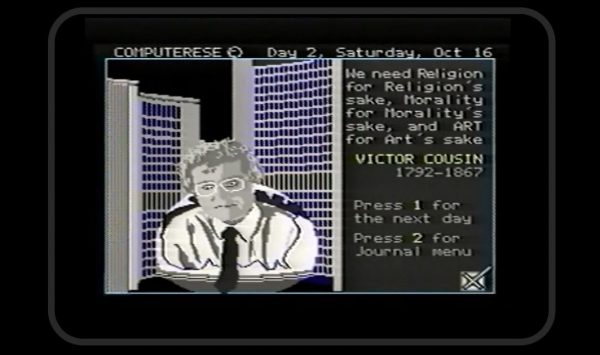 As far as Toronto mayoral elections go, 1982 was a snoozer. With no prominent competition, Art Eggleton was assured a second term. Utilizing his dull, amiable, centrist image, he campaigned on a platform of vague promises regarding affordable housing, keeping taxes low, job creation, maintaining social services, and reducing crime.

Somebody had to inject colour into this race.

Enter the Hummer Sisters, a satirical performance art trio who incorporated video technology into their work. From their base at the Cameron House, they poked fun at Eggleton and the city’s political establishment and raised awareness of issues concerning artists. They called their campaign ART vs Art as a play on both Eggleton’s name and 19th century philosopher Victor Cousin’s belief that people needed “art for art’s sake.”

Because only one member of the group could be listed on the ballot alongside the other 10 mayoral candidates, the Hummers adopted the name “A. Hummer,” with Deanne Taylor assuming that persona in public. The campaign unfolded through nightly cabarets at the Cameron House involving other performers under the umbrella title of Artful Democracy. The back room was filled with monitors depicting live and pre-recorded material. Performers might carry a camera on stage, or be in a second-floor studio and beamed to the audience via the monitors. The Hummers might appear in campaign mode, or as a variety of other characters commenting on the election. 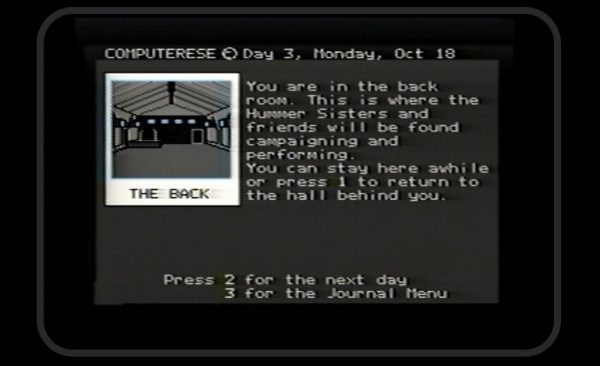 Among the interactive items for the audience was a Telidon terminal. First developed in the late 1970s, Telidon was a “videotex” service that delivered pre-internet information and graphics. The technology received a major rollout in 1981 via the VISTA program, a joint project of the federal Department of Communications, Bell Canada, and Infomart (a venture of Southam Press and Torstar), which placed 500 Telidon decoders into businesses and residences in Ontario and Quebec.

“Information providers” were hired to create content, including Bill Perry, who produced Computerese, a videotex magazine covering electronic media. It was among the most popular offerings, sometimes receiving more hits than the other content providers combined. This made Computerese, along with the increasing use of videotex among local arts collectives and organizations, an ideal tool to cover A. Hummer’s campaign.

Computerese posted daily campaign summaries (now archived online) that were viewed by remote users of the VISTA trial or on the Telidon terminal at the Cameron House. Perry received permission to use any part of the campaign, including script excerpts, for the summaries. The result reads like a notebook, containing portions of performance interviews and campaign statements. 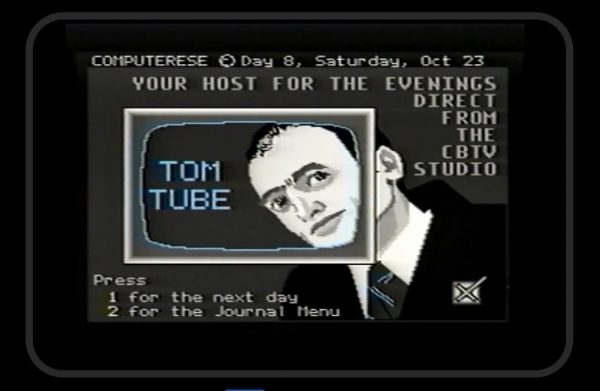 The summaries include the Hummers’ digs at Eggleton’s ties to the establishment. In their version, Eggleton realized how lacklustre a candidate he was. “I’m not the smartest in the world, but I’m a realist. To me the future is a beautiful blueprint and a balanced budget … no more and no less.” He summed up “the pillars of urban life” as “Planning. Progress. Profit.”

Reviewing the summaries reveals moments when the Hummers turned serious. Via an “electronic position paper,” they promoted a policy of converting empty commercial and industrial space into co-op residences and workplaces for artists and small business. “A. Hummer believes that the creation of affordable housing is an industrial priority, as well as a social right,” the statement declared. “The job begins at home.” When Metro Council voted to deny funding to three artistic organizations under pressure from Borough of York mayor Gayle Christie (who was offended by recent exhibitions depicting excrement and discussing incest), the Hummers urged voters to write to Metro Toronto chairman Paul Godfrey to protest. Taylor felt the lesson artists needed to learn from Christie’s complaints was that funding could be cut out from under them at any moment. (In the end, Christie lost a close race to future Metro Toronto chairman Alan Tonks on election night). 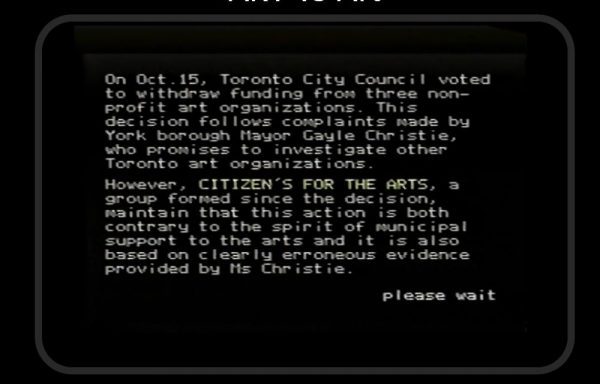 The Hummers drew mainstream media attention throughout the campaign, highlighting their promise to offer “24-hour mayor service” and offerings of “devilled Eggletons” to hungry reporters. They also held a penny-a-plate fundraising dinner to cover their $3,000 campaign cost. It was inspired by Eggleton’s decision early in the campaign to hold a $150-per-plate meal for over 900 business elites. “If he has to spend $100,000 to tell people who he is,” Taylor told the Globe and Mail, “maybe he’s the fringe candidate.”

At that same fundraiser, Eggleton made an awful joke about all of his potential competitors, observing that they should “stay at home, get some rest and take Extra-Strength Tylenol.” This was in the wake of several deaths from Tylenol laced with cyanide in the Chicago area.

Despite criticism that they occasionally took themselves too seriously or failed to build bridges with other political activists, the Hummers finished second. While Eggleton captured 75% of the ballots on November 8, A. Hummer’s 11,721 votes weren’t shabby, even winning one poll on Ward’s Island. They celebrated at the Cameron House, where mock results placed them only three votes behind Eggleton. Taylor declared the result “a victory for art.” She also declared that “we will act as though we were elected. We will be the ideal mayors of the ideal city. This is too important a job for the politicians.” Eggleton’s communications advisor Bill Marshall was spotted at the party. As for the re-elected mayor, he suggested that a deposit in the range of $500-$1,000 should be implemented to keep cranks, entertainers, and self-promoters out of future mayoral elections.

Telidon tests continued until federal support ended in 1985. The art of the technology survived on floppy disks and videotapes, which were recovered in recent years through Perry’s work, with the collection being passed on to the Art Gallery of Ontario. The ART vs Art summaries can be viewed online, and may be viewed as a prototype for how an election campaign could be covered online. Taylor remained a key figure in Toronto’s theatre scene through her work with VideoCabaret’s The History of the Village of Small Huts cycle, and passed away in 2020.

Summarizing A. Hummer’s campaign in 1982, Now writer Susan G. Cole observed that it was an “attempt to galvanize artists into the understanding that they play an important role in the life of the city and to make the ordinary citizen aware of his or her potential for art.”

The first exhibition and sale of Wm. Perry’s Lost & Found Telidon Art of the Early 80s happens at the Cameron House, every Thursday, Friday & Saturday in November, from 4 to 7 p.m.

All images from Bill Perry’s Telidon “ART vs Art.”