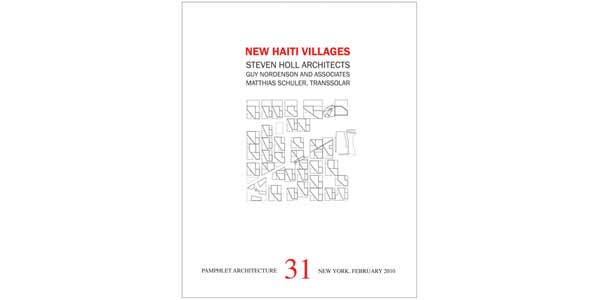 Pamphlet Architecture 31: New Haitian Villages (PA31) is thirty-first in this series of small, concise publications that, under the guidance of Steven Holl, have been documenting architectural proposals, cultural dialogue and history since 1977. Similar to previous issues of Pamphlet Architecture, New Haitian Villages maintains a balance between contextual information and tangible design solutions for culturally relevant topics. However, unlike many of its predecessors, PA31 deals directly with a current event and a situation of international significance that calls for action from architects, designers, politicians and citizens alike.

A brief political history of Haiti in the form of a timeline sets the stage for the publication and explains Haiti’s tumultuous past and the political situation prior to the earthquake. This is followed by Jean Henock Beauchamps and Araby Smyth’s essay on the traditional Lakou housing complexes and their social significance in rural Haiti. Lakous are family villages, within which several generations of a single family live in houses surrounding a central garden or agricultural plot. The essay explains the importance of living in close proximity to both family and agriculture. The lakous are considered sacred spaces and their design extends beyond basic practicality into years of cultural tradition.

In response to this, Steven Holl Architects (SHA) proposes the construction of Dense-Pack Villages as an architectural solution to the devastating earthquake in 2010 – which left over one million people without homes. SHA’s proposal addresses issues around site, architecture, housing plans, school plans and locations, and energy sources. The proposal calls for constructing the villages outside of the devastation and structural nightmare of Port-au-Prince and  would accommodate the estimated 600,000 people that have been forced to flee the city and head to the countryside.

The proposed architecture is made up of simple courtyard-style houses that can be built using recycled concrete from Port-au-Prince and local labour. The high strength steel and the low concrete buildings proposed are made to withstand strong hurricanes and level nine earthquakes. Additionally, SHA proposes that within each village there will be space for local shops, a public building such as a primary school or chapel, and an agricultural plot for each family in the area immediately surrounding the village. Nine fully-realized plans – ranging from two to four bedrooms – are presented. The plans maximize the space in each dwelling and the orientation of the units utilize the regional climate.

The Dense-Pack villages are presented as a group of villages, which would be constructed in close enough proximity to one another that residents would be able to take advantage of shared facilities – education facilities, in particular. A new campus, that would be constructed similarly to the Dense-Pack Villages and situated next to all the villages, is proposed to address the over 400,000 students were displaced from the earthquake.

Matthias Schuler, of the climate engineering firm Transsolar, further investigates the potential of Dense-Pack Villages through his analysis on Renewable Energy and Resources in Haiti. He investigates the average water usage per family in Haiti, and compares that to the need of each village. He also looks at what Haiti offers in terms of climate and briefly explains how solar thermal desalinization, solar electricity and solar cooking are feasible solutions for Haiti and the Dense-Pack Villages. Simple compostable toilets and Grey Water filtration systems are also suggested solutions. PA31 closes with an essay by structural engineers Guy Nordenson and his colleague Rebecca Nixon explaining the type and construction of concrete masonry that would be needed to withstand both hurricanes and earthquakes.

SHA’s proposal was designed previously for an off-the-grid community housing project in Turkey, which gave the architects the opportunity to further refine their concept before it was published. Without a doubt, it is a thorough architectural investigation. However, I felt that there was a disconnect between Beauchamps and Smyth’s essay and SHA’s proposal. Beauchamps and Smyth assert that cultural and social significance of the villages, or Lakous, in rural Haiti are exceptionally important: “Lakou is an ethical expression of free workers who are masters of their time and bodies.” I didn’t feel that SHA justified their architectural case in terms of the social and cultural significance that was so poignantly portrayed at the onset of the publication.  That being said, in the case of needing a rapid re-building and a renewal of communities, perhaps a straight-forward vision such as the Dense-Pack houses is what is called for, and for that discussion, PA31 acts as an impressive facilitator.

For more information on the book visit the Princeton Architectural Press website.