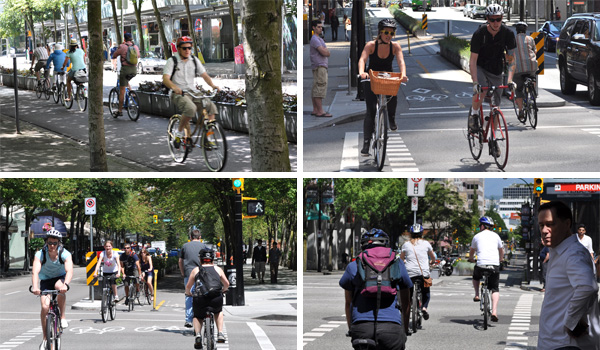 [Ed: A video montage of the lanes is also available -bg]

Several bike lane related reports and surveys will hit council on Thursday, providing statistics galore. Some, like the June-to-June midweek ridership increases of 50% on Dunsmuir, show clear benefits. Others, like the economic impact study results, rely on merchants’ anecdotal reports to estimate a 4% decrease in sales – meanwhile, vacancy rates on Hornby are down from last year’s 12% to 2%. The positive results are recognized not only by cyclists but by area visitors as well, with support for the Hornby lanes up to 64%.

Numbers aren’t required to see that the lanes are increasing ridership by making cyclists feel safe – that takes only a bike ride to find out. Unfortunately, those among the entrenched 28% opposition are also least likely to take this opportunity. If they did, they’d find an easy and protected False Creek crossing on the Burrard Bridge tying into the Hornby lanes and a quick and seamless route from quiet streets on Union and Adanac, over the Dunsmuir Viaduct, and into the heart of downtown. They’d also find plenty of other Vancouverites to keep them company. 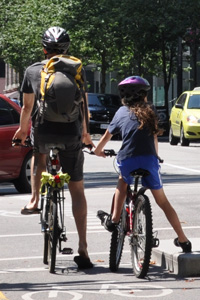 Comfortable for All Ages and Abilities

While the Hornby lanes don’t yet have a year under their belt, they’re keeping pace with Dunsmuir and may even be catching up; total trips on Hornby grew from 60% of Dunsmuir levels in January to 80% as many in June.

Although it’s early, promised safety improvements also seem to be materializing, with an 80% decrease in sidewalk riding along Hornby (to less than a percent) and July-March collisions on Dunsmuir down 18% from the average of the previous six years. Meanwhile, women riders are up slightly versus the previous painted lanes, making up one in three cyclists on Hornby. Children, though still a tiny fraction of riders, are now four times more prevalent; improved connections – to the West End and the Burrard Inlet seawall, for example – would help on this count.

While the Dunsmuir lanes connect relatively well to Beatty, Richards, Homer, and – of course – Hornby, the Hornby lanes suffer from a lack of easy east-west connections. Direct connections like Pacific, Nelson, and Smithe are heavily automobile dominated, while Robson and Davie aren’t much more comfortable for most. The confusing one-way separated connection between Burrard and Hornby at Drake seems to be used just as much, if not more, in the “wrong” direction as a result, and the failure to properly bridge the one block gap between Burrard and Hornby to the quiet West End street grid (at Smithe, for example) was a huge missed opportunity. 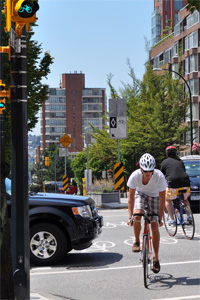 While the Hornby lanes also have yet to receive green paint like on Dunsmuir, they do have several crossings with separate phases for cyclists and right-turning drivers. Unfortunately, like the right turn bans at Helmcken, Seymour, and Hornby, the right-on-red prohibitions are also all-too-commonly violated, creating dangerous and unpredictable crossings for cyclists.

Enforcement against scofflaws, both drivers and cyclists, along Dunsmuir and Hornby would be welcome to set a new tone, given the danger posed by these right turns and the lack of justification for poor cycling behaviour. Anecdotally, red-light running, like sidewalk-riding, appears to be down significantly already.

Signal timings along Dunsmuir and Hornby would also benefit from an adjustment, given that they are still timed for free-flow, one-way automobile traffic. While it is technically possible to hit green lights from the Dunsmuir viaduct to Burrard Street on a bike, traveling against the automobile-grain means hitting every red on Hornby and every second red on Dunsmuir. While it would seem that drivers benefit, during peak hours congestion on these streets rarely allows those free-flow speeds, bike lanes or not.

Either way, support among drivers for the Hornby lanes is up, from 35% to 44%, and they use the street as much as they ever did. Rather than the five to fifteen minutes delay expected – and still believed – by some drivers, peak period travel time is up only 30 seconds. Fewer on-street parking spaces has meant a shift to the ten thousand plus off-street parking spaces city staff identified prior to implementation, as parkade use increased from 49% to 64%. Drivers are also parking about a half block closer to their destination. 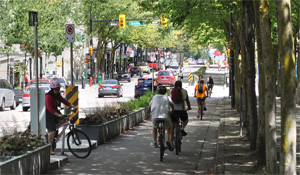 As for the importance of drivers to business, one of the most interesting results comes from comparing the surveys of visitors and merchants on customers’ modes of travel. While Hornby merchants estimated two in five customers arrive by car, the survey of Hornby customers paints a dramatically different picture, with three times as many cyclists, twice as many transit riders, and only half as many drivers patronizing the street as merchants believe. This mirrors results of similar surveys in Bristol, UK, and Graz, Austria, showing a seemingly universal predilection among shopkeepers to over-estimate how critical automobile traffic is to their business.

The results in other sections, then, are all the less surprising, since the economic impact analysis asked and trusted merchants to estimate the numbers themselves. After six contact attempts, the response rate was still only 32%, and actual proof of any economic misfortune was only furnished by four of the fifteen businesses asked – and, while the “estimated loss in sales was not as high as reported in the surveys, the responses by businesses have been taken at their word.” 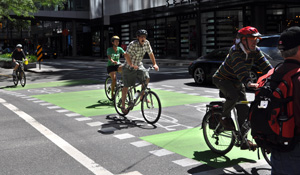 Eleven businesses along Dunsmuir claimed an average of -2% since 2010 and a paltry three “control” businesses along Georgia averaged +2% to get the -4% number cited. Although the Hornby results had a larger sample, the -4% impact in the survey results (page 33) mysteriously turned into -10% when it was inserted in the report (page 5). Howe was its control, notable for gaining parking spaces lost by Hornby when the trolleys returned to Granville. In the next question, respondents broke down the impact by category. The numbers for Hornby added up to a whopping -31% rather than -4%, going well beyond attribution bias to the point that the survey might as well have been an opinion survey.

Finally, the oft-quoted “$2.4 million in lost sales,” is actually give-or-take $1.0 million, is sales not profits (estimated at one fifth of sales), and is merely the average of two worse estimates: one assuming everyone was impacted as much as the 32% who responded claimed to be, and another assuming that only the responding businesses were impacted at all. The impact “is relatively modest based on industry standards” and “is expected to become less … over the next few years.”

All together, this is hardly the catastrophe that vocal opponents have repeatedly claimed for business – and there’s the rub. Rather than laying out the welcome mat for cyclists, many have been spending their time expressing just how unwanted their patronage is. As ridership continues to increase, this could prove to be just as destructive a strategy as exaggerating the impacts on – and importance of – drivers.

Brian Gould is a transportation planner, urbanist, advocate, and recent graduate of the Master of City Planning program at UC Berkeley.