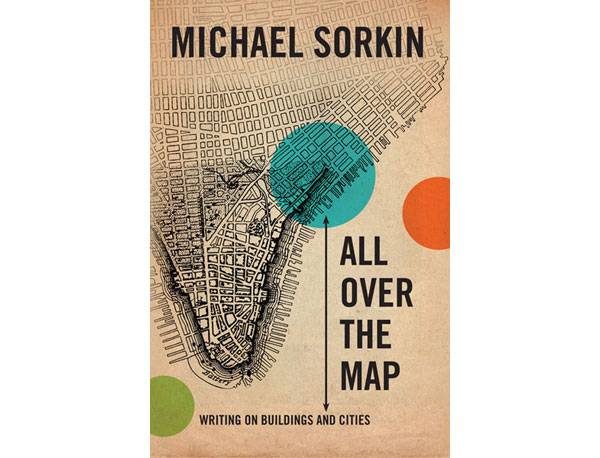 Thirty years and ten books later, architect and critic Michael Sorkin has given us All Over the Map: Writing on Buildings and Cities, an aptly named collection of 76 essays, whose contents oscillate between current architectural happenings and the rebuilding efforts at Ground Zero. As a NY native from Greenwich Village, Sorkin’s architecture office was mere blocks from the WTC site, and the book opens with raw expressions of his psychological well-being and the effects that the event surely must have had on him.

In the book’s introduction, where he is at his most acerbic best, he apologizes for the number of essays solely on 9/11 and the WTC site.  He admits that he struggled to edit them out and at 393 pages, the book is voluminous. However, he wisely chose to keep the bulk in, allowing one to plainly see the entirety of the unruly process of rebuilding Ground Zero, from the relationship between all the players –the Port Authority and the LMDC (Lower Manhattan Development Corporation) and a group called New York New Visions – to its present state, now mere weeks away from the ten year anniversary of the tragedy.

I must confess that reading Sorkin’s excellent Exquisite Corpse (Verso 1994) in university inspired me to become an architecture writer, as it remains today an invaluable reference book for me in my library. He is unquestionably one of the most succinct voices on the subjects of architecture and urbanism, and one of a dying breed it would seem, especially with the recent announcement that New York Times architecture critic –  Nicolai Ouroussoff – is stepping down from his post there.

As a counterpoint to the NY Times and their architecture critics over the years, the Village Voice had Sorkin as their architecture critic for ten years, of which that collection of essays otherwise became known as the Exquisite Corpse. Like that book two decades ago, All Over the Map is similarly now a relevant and coherent voice reporting on our current architecture scene, along with some of its obvious excesses.

Michael Sorkin has had the triple duty of being an architect, planner, and writer for some three decades now. Moreover, he has served as the director of the School of Architecture at the City College of New York. Although he is still practicing, Sorkin humorously states in his introduction that his more recent work at the office has been half-commercial necessity and half large urban planning schemes – the result of being the gadfly once too often for those in more conventional architecture circles, i.e. developers, city planners, etc.

Nonetheless, the Michael Sorkin Studio has now been open for business for 30 years. With several projects ongoing currently in China and Turkey, it appears the office work is likewise “all over the map”, as many modern practices must be in our globalized age.

As a contributing editor for Architecture Record (AR) for a number of years now, All Over the Map is in large part made of his contribution for the magazine, along with lectures and papers. With the affects of 9/11 on his writing as pronounced as they are on this volume, Sorkin has in a way here created an auto-biographical work. Indeed, he paces out the essays as a facsimile of the time leading up to the event, the fury during it, and the return to it again and again immediately after.

As such, three rather business-as-usual, mild essays start the book. This is followed by eleven essays in a row solely on the catastrophic event, starting with the aptly named ‘After the Fall.’ Some of these essays are almost hallucinatory, explaining the surreal act of going through the police barriers to get to his office immediately afterwards, accompanied all the while by ash in the air.

Other essays on the subject are longer and more descriptive, seeking a whole new urban plan for the displaced commercial space and imagining it all distributed through the boroughs rather than continuing to concentrate it all in one place.

By the time the run of essays ends with the harmless ‘Riff on Rem’ – an unabashed stick-poking essay at the starchitect for selling out to Prada – we are relieved to leave the subject, if even only for a moment. Consequently, the remainder of the book is set up such that every other essay is on the rebuilding of the WTC.

As a member of the business community, Sorkin was invited along with many others to attend community open-houses to vet local feedback on the schemes being presented for their place of business. Sorkin relates how he hilariously stood up at one point and shouted bullshit, but could only be heard by a few amused folks surrounding him due to the sheer size of the open-house and the PA system with which any free speaking person would have to compete. As he appropriately cited Aldo van Eyck in his introduction, “Democracy means no freedom for fascism!”

Other essays in this collection include discussions of the emergence of urbanism due to the growth of cities throughout the world, especially in China. One tongue-in-cheek essay on the athletes village at the Salt Lake City Winter Olympics has an all too familiar ring to the struggle of the Village in Vancouver, with the difference that the Salt Lake City site was set on a bluff apart from the city itself. Built in Fort Hood, Sorkin points out how the site was initially used by the early government to protect the city from the First Nations, and provide a good vantage point to keep an eye on the Mormons. Another poignant essay in the book examines the successes and failures to rebuild after Katrina in ‘Drowning in the Gulf Again.’

With pieces on the Amazon and Jerusalem, New Orleans and New York, the essays of this book are literally all over the map and can definitely be appreciated by designers, educators, and writers alike. Sorkin remains as always on top of his lyrical prose game, combining wit with tenure to resonate as a force to be reckoned with in our increasingly shallow times.

In an age where blogs are killing books and wiki entries are replacing term papers, Michael Sorkin’s writings are an honest and current reporting of our present architectural and urbanist zeitgeist, to be enjoyed by designers and urbanists alike.