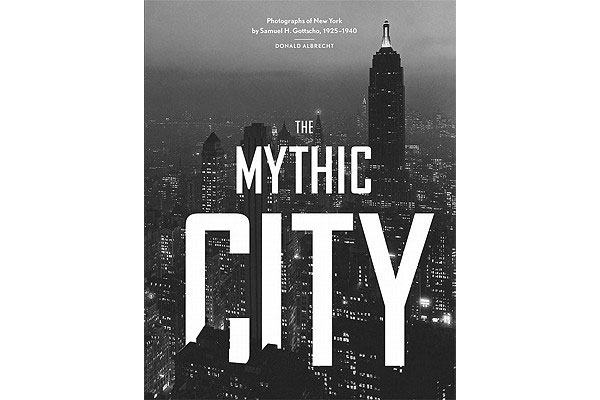 In 1925, at the age of 50, traveling salesman Samuel H. Gottscho quit his job and began a new career as a photographer. Over the next fifteen years, he went on to create one of the worlds largest photographic documentations of New York City and continued to work as a professional photographer until his death in 1971. The Mythic City is a collection of Gottscho’s architectural photographs of New York City taken between 1925-1944.  These photographs set the stage for Gottscho’s long, successful and influential career.

Gottscho worked with the city as his subject until the start of WWII in 1941. During those years, he photographed “virtually every built form of the modern city”.Towering skyscrapers were his muse, he photographed them at night, during the day, from the street and from other buildings. He documented every square foot of rapidly developing Manhattan during two of the most exciting decades of the twentieth century.

Most notable are his extensive photographs of the Rockefeller Center in the early 1930s. Gottscho was close friends with architect Raymond Hood and as such he was given exclusive access to the Center throughout its construction and completion. The tall slender grandeur of the architecture is extenuated in Gottscho’s imagery, emphasizing not only the importance of the building, but the importance of the Rockefeller family as well.

Gottscho, for the early part of his career was primarily an architectural photographer who focused on our built environment and infrastructure. As such, he rarely depicted people, and when he did, they acted more as props that became a part of the composition. Only in the limited photos of public housing in the Bronx and Harlem does Gottscho photograph people as featured subjects “…where unanimated children posed to suggest the projects’ social beneficence”. Elsewhere people are only included as additional elements, whether it be to show the scale of a building, or to accentuate the prestige of a particular location.

Gottscho’s photography depicts a very sophisticated New York City. The crisp black and white images show almost no people, few cars, and no signs of the busy chaos typically associated with “the city that never sleeps.” Even images of Times Square have a quiet sophistication to them. The city is depicted as a beautiful, mystical and surreal. Gottscho’s night photography is arguably the most impressive work in the collection. They are breathtaking images of the city as sea of twinkling white lights encased by the ghostly shadows of skyscrapers. Tiny singular suggestions of human activity are swallowed up in the expansive scale of the City. A city teaming with life that is just out of sight, making it seem untouchable and most desirable.