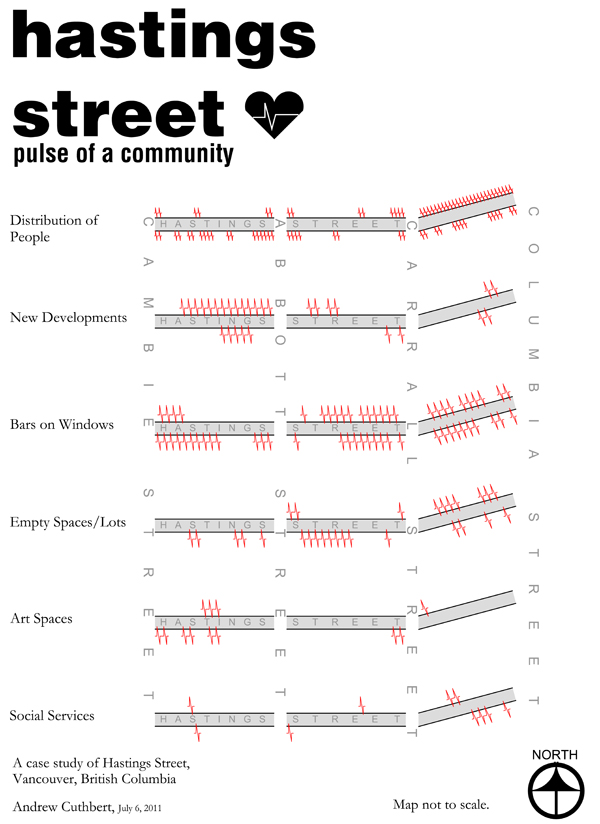 Downtown Eastside has come to be known as “Canada’s Poorest Postal Code”.  The area radiating from the intersection at Main and Hastings has gained notoriety as an epicenter of drug use, poverty and mental illness.  This map focuses on a few blocks west of this intersection, on Hastings Street between Cambie and Columbia.  Recently, an influx of investment has driven change in parts of the neighbourhood, the most prominent new development being the new Woodward’s complex, a mixed-use conglomeration of buildings that occupies of the block of Hastings between Cambie and Abbot.  New life is being injected into the community, but is it for the better?  Development and the evolution of the neighborhood are inevitable, but development should not occur at the expense of current occupants.

The data for the map graphic “Hastings Street: Pulse of a Community” was collected on the basis of ‘street feel’.  The map itself was meant to capture an impression of Hastings and to show how different seemingly unrelated elements work together to form an impression of the street as a place in transition.

Presence/absence data was collected for the following parameters:

The presence/absence data is displayed side by side in order to see correlations between datasets.  Some relations are stark and obvious, while others follow a more subtle gradient.  In general, the section between Cambie and Columbia streets shows a gradient of gentrification and general use.  By observing base characteristics you can see as new replaces old, the distribution of some things change as others remain constant.  The data presented here are only a snapshot of life in the Hastings community.  The neighborhood is always changing. In the future it may be possible to view other patterns from other or the same characteristics.

The most stark comparisons and discussions can be drawn from the top three datasets.  One obvious trend is that new development does not tend to have barred windows.  Bars create an air of hostility that developers may not want to convey.  Buildings without bars should create a more welcoming feeling to the street.  With this in mind, we look at the distribution of people and see that it seems there are fewer people congregating around new developments. Maybe the Hastings community is undeterred by bars.  Or is there something unwelcoming about new developments?

In the case of Woodward’s development one feature that makes it stand out is the number of entrances it has leading to Hastings street. The complex was designed to have a few large entrances, which makes sense for the layout.  However the result is fewer entrances to Hastings Street so people use the street to travel to and congregate at these points.  Because there are fewer of these points, there seem to be fewer people along this section of the street.

This is just one comparison that could be drawn from this data and many other interesting correlations can be observed.  By comparing neutral datasets side by side it is possible to see some very interesting interactions.  Using this data as a snapshot provides only one instance of what life is like on Hastings Street, the gradient of change is apparent and the pulse of the community becomes visible.

***
Andrew Cuthbert is a geomatics technician working in environmental consulting.  As an urban planning enthusiast he hopes to pursue graduate to school in the near future.  Andrew is also a 365 day per year cyclist and a periodic contributor to the Urbane Cyclist magazine for the Vancouver Area Cycling Coalition.