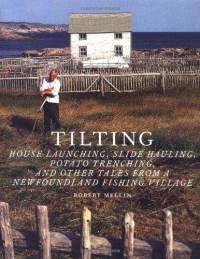 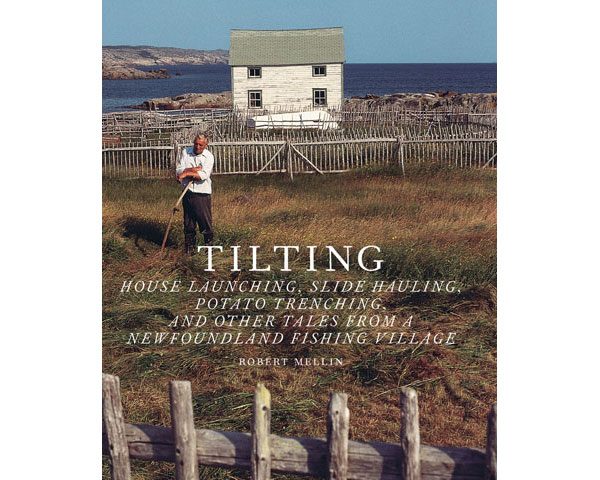 Tilting: House Launching, Slide Hauling, Potato Trenching and Other Tales from a Newfoundland Fishing Village is a cultural and architectural documentation of Tilting, Newfoundland. In 1987, architect and professor, Robert Mellin moved to Tilting with the intention of recording every house in the town. Over the next sixteen years he documented housing types, personal histories, memories, environmental changes and community resilience. From the hand-made window sashes to the collapse of the Cod fishery, Mellin uses architecture as a language for which to describe the history of a community

Tilting is located on eastern coast of Fogo Island: “rugged landscape, strong people, fragile architecture” is how he describes the community and it’s architecture. He lived in the town for one year from 1987 until 1988, and until 2003 he regularly returned to continue his research. Having taken most of the first year in Tilting to go from “that strange man” to “Robert,” Mellin writes with an awareness and sensitivity of someone who is truly part of the community.

The town of Tilting is steeped in old Irish traditions and unique architectural solutions. One of the most interesting of these solutions is House Launching –  where, simply put, a house is moved from one location to another. Astonishingly simple idea if you are designing houses with the intention of mobility, but very hard to imagine in a world of concrete foundations and 2000 sq. ft. homes. Traditionally the houses in Tilting were built on wooden foundations and had very small footprint, making them easier to heat and easier to move. “Gary’s house come from over by Anthony Foley’s and the dishes were on the table – never stirred.” Men would make wooden sleds, lift the house onto the sled, and drag it across the harbour to its new location. Houses were designed and built for mobility, and rarely was a piece of land included when purchasing a new house.

In the 1980s, as the fishery’s were slowing and people needed to look elsewhere for work, the dynamic of Tilting was already changing. Residents would leave for a season and come back with new images of housing, new materials and new techniques. Larger two-storey homes, low bungalows and concrete foundations began replacing Tilting’s tried-and-true vernacular architecture.  As Mellin research shows, this shift changed not only the architectural landscape, but the cultural landscape, as well.

By researching the architecture of Tilting, Mellin was able to learn about the culture and history of the families, the houses, the buildings and the land. The architecture was like a tool for telling stories.  He learned that kitchens were often the most used rooms and that the un-used living rooms – a.k.a. “The Room” – were saved for formal visits, despite how small the houses were. He learned that until the new houses came to town people were waked in their own homes for two days, blinds were drawn, and family members were able to mourn and grieve. He also learned about the unconditional welcoming nature of Tilting residents: “I never answers a knock—knock comes to the door I sings out. ‘Come on in boy!’ you see?” and how as Tilting changes, that tradition is slow changing with it: “Today, there be no one to come in.”

Mellin moved to Tilting before the collapse of the cod fishery and before cars dominated, when people still hauled water, launched houses, and painted their wood shingles in cod liver oil and ochre. He recorded the events and changes during two of the decades that, arguably, changed the town more than any other decades in its history. He is meticulous in the organization of his essays and the architectural drawings of housing types. Beautiful images and engaging personal quotes strengthen the essays and offer the readers a more personal glimpse into the lives of Tilting residents, their homes, their boots and their changing world.

Tilting: House Launching, Slide Hauling, Potato Trenching and Other Tales from a Newfoundland Fishing Village is truly one of the most engaging books I have read to-date on the relationship between culture and architecture.