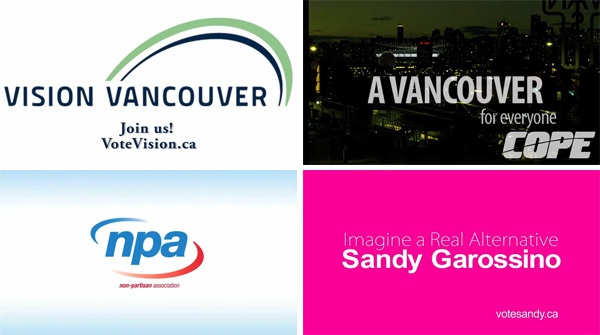 Twitter may be downright dirty (see Friday’s piece), but it’s not the only front in the online campaign. Online ads, primarily on YouTube, have become a staple of local campaigns. They’re infinitely cheaper than television ads to broadcast, but it takes a particular type of video to gain widespread attention – people who aren’t likely to follow the debates aren’t necessarily going to be that much more inclined to watch the YouTube equivalent. It’s no surprise, then, that the most popular (and successful, if views are a measure of that) video is a silly parody attack ad from Vision-affiliated WeBackTheJuiceMan.ca.

Funny will only get you so far, of course. Vision and COPE have several polished party policy planks, while the NPA have a slew of shorter pieces. Meanwhile, NPA candidate Jason Lamarche seems to have outproduced his own party and Sandy Garossino has been able to keep up as an independent. Campaign videos are carefully scripted, to be sure, but how the message is delivered is just as important as what is said – and what isn’t said. The top video for each campaign so far, in descending order of views, is after the jump.