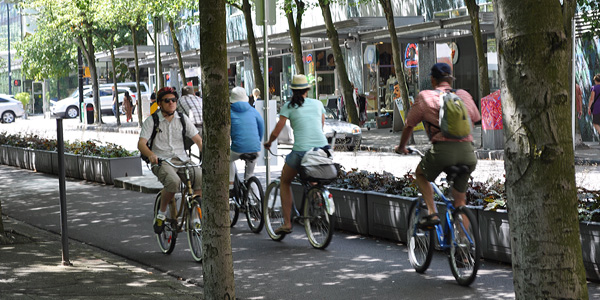 Transportation, always a major topic during a civic election, has spiked somewhat in the last few days with prompting from public forums and the release of the Vancouver Area Cycling Coalition’s comprehensive survey. While both forms of information are useful, they allow candidates to shape their message a little too much at times. Given the right audience, the NPA’s George Affleck will stick his neck out further than any other candidate in supporting road pricing in the most congested areas of Metro Vancouver. He’ll also muse about solutions to bring a second bicycle lane to the Burrard Bridge and suggest that he doesn’t have any particular separated bike lane qualms beside business consultation – unfortunately, a rather different tone than his Georgia Straight op-ed.

Similarly, after the Green Party’s Adriane Carr played to Sunday’s audience by claiming that there were no traffic studies or public support to removing the viaducts, she was conspicuously silent at the next night’s transportation forum despite ribbing from Vision’s Geoff Meggs. Conversely, her explanation of the “bike-free streets” debacle was embarrassingly thorough as she clarified it to bike-free bus lanes – simply suggesting that cyclists and transit vehicles be given their own space would probably be a better phrasing yet. To be fair, she gave what may have been the night’s most convincing arguments in favour of bike lane expansion.

Meanwhile, at Sunday evening’s Last Candidate Standing, the NPA’s Sean Bickerton explained his support for transit based density and touted his use of transit. He’s favoured removing the viaducts in the past, against what is now party line. At a Tuesday presser, however, he threw cyclists under that proverbial bus by dedicating an entire platform point to their perceived misbehaviour. While drivers and pedestrians are only covered by a vague “share the road” education campaign, Bickerton wants to bring in cyclist licensing while cracking down on sidewalk riding and those without their styrofoam hats (as opposed to a more balanced approach).

The cyclist licensing program is particularly troubling, given that it’s not clear whether there’s any jurisdiction that has one, while even the few bicycle registration programs that remain are on their way out. In short, the programs are rarely enforced, have trouble paying their costs, and serve little function since officers would still give tickets in almost exactly the same way. While it’s clear who the proposal plays to, his vague defenses and comparisons of cyclist licenses to dog licenses aren’t helping. Unsurprisingly, there’s no mention of this plan on his cycling questionaire response.

Another disappointment for cyclists is that most slates (NPA aside) chose to submit party positions with little information to differentiate candidates. Vision’s response rightfully points to their more high-profile achievements, including the Burrard Bridge and other separated lanes, but is otherwise rather tepid – actions speak louder than words seems to be their approach for this election. COPE and NSV, by contrast, thoroughly lay out the case for increased cycling and clearly lay out their support for expanding separated bicycle lanes. The main difference is that COPE is much more eager to publicly express their support; Nicole Benson of NSV expressed her personal support, but couched it in layers of party position about neighbourhood consultation.

The NPA responses tend to rely on citing their 400km of bicycle routes instituted (often misrepresented as “lanes” when neighbourhood streets alone are 65% of that total), but propose mainly education, enforcement, and consultation for the future. The NPA candidates also carefully avoid mentioning their call for a moratorium, but do claim that “downtown bike lanes have jeopardized the bike lane program due to their widespread unpopularity.”

The question regarding Melbourne’s failing bicycle share system and its restrictive helmet laws is an interesting barometer. Vision did not touch the helmet issue at all, while COPE proposed shifting the onus to cyclists and away from rental operations. NSV dedicated their longest response to this question, showing a detailed understanding of the argued downsides of helmet laws and proposing cautiously searching for a better solution. Among the NPA respondents, Jason Lamarche and Mike Klassen are both bike-share skeptics and helmet law fans, Bickerton supports bike share and helmet law enforcement, and Affleck would support a review of laws as part of his full support for bike share.

While NPA party line is a moratorium on separated bike lane expansion and taking out the existing lanes if they can’t be “fixed,” the definition of what constitutes a fix or what needs to be fixed varies. In a CBC interview (starts at 1:21), Klassen criticized the right turn ban on Dunsmuir at Hornby. In a widely shared Georgia Straight op-ed, Ken Charko argued that the lanes should be taken out from October through march and used for car parking – unsurprisingly not popular with cyclists. On Twitter, Lamarche identified the entrance to the Burrard Bridge lane from Pacific as congestion inducing. In speaking with Joe Carangi, and he cited the protected right turns along Hornby as causing traffic to back up for a hyperbolic 50 blocks – but with the disclaimer that he wasn’t an engineer.

The summation of the suggestions is essentially to destroy the entire Hornby separated lane (if not Dunsmuir as well) all the way back to the Burrard Bridge. Without a right turn ban at Hornby, traffic peer pressure from behind the turner will force them to make risky turns across cyclists in the bike lane. Without a separate right turn phase for cars, they’ll get their green at the same time cyclists and pedestrians do; given the flow of pedestrians at Georgia, that means right turning cars will get stuck precisely in the middle of the bike lane and lose their new free-flow phase. Without the lane on the bridge, cyclists will have to go back to squeezing onto the sidewalk with pedestrians. Beyond obvious problems for winter cyclists, seasonal bike lanes will dampen year-round demand by being unreliable.

There seems to be little difference in transit position between Vision and the NPA aside from the P3 streetcar, but readers should carefully consider the NPA’s unwillingness to study the viaducts and outright hostility toward making critical downtown connections with safe, separated bicycle lanes. George Affleck chaired Modo car-share and has 20 years of car-free history behind him, and his answers suggest he may be the most likely to go off NPA party line. Vancouver’s alphabet voting bias might catch the city a break here.