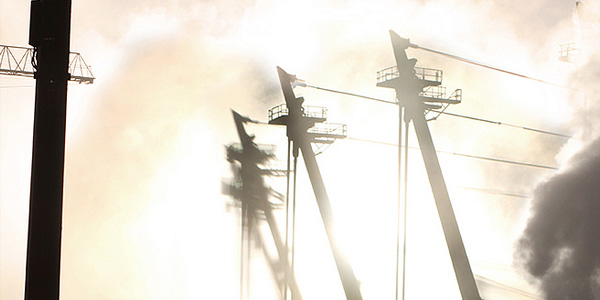 A selected image from the Spacing Vancouver Flickr pool. Part of a photo by Philip Tong.

When I found out that CBC was opening their audience for Wednesday night’s mayoral debate between Robertson and Anton, I immediately slotted it into the week’s schedule after Sunday’s “Last Candidate Standing” and Monday’s “Connecting People and Places” without much thought. After being herded into the studio and sitting through the mic checks, however, it was clear that any new information was going to be thoroughly squeezed through the television tube. If you want the definition of manufactured story, check out CBC’s own coverage entitled “Occupy Vancouver dominates CBC mayor’s debate.” No mention, naturally, that the format was specifically designed to give Occupy the entire first third, with housing and transportation fighting for the scraps.

The result wasn’t surprising. I would tell you how many times the same question can be asked in roughly the same way, but frankly I lost count. One speaker attempted to broaden the topic to include the corporatization of park space, and was chastised for it. I also began to be painfully aware of the crowd dynamic, which seemed to feature claquers, if not cheering sections. Rarely did the reaction seem spontaneous, with the exception of gasps and nervous laughter at Anton’s emphatic “yes!” in response to whether she believed Occupy Vancouver was responsible for Friday’s death. She responded that she “didn’t find it funny,” but neither did I, left wondering why Occupy doesn’t get credit for saving a life on Thursday among other things.

In order to overemphasize Occupy, transportation was under-emphasized. Half an hour was barely enough to discuss TransLink’s governance and funding model – always an exciting topic – even after subtracting the back-and-forth about whether streetcars were the best thing in the world or the worst thing in the world. Perhaps the most important, yet subtle point came when Robertson referred to “heavy rail” for Broadway as being his priority, while Anton avoided naming the mode. The second most important was the lack of a point: separated bicycle lanes only came up in passing.

Finally, if any topic in the debate was under-represented and marginalized, it was affordable housing in any depth. The format, which excluded all other mayoral candidates, allowed the conversation to narrow down to a false dichotomy between unbridled capitalism and government subsidy – extremes that neither candidate really represents. That both the doors in the Potemkin set for those options led to the same developer-pointed funnel was not mentioned, nor was the conflict between “free the markets” and “let the neighbourhood decide.” The only references to any form of inherently affordable housing came during the segment on laneway homes, when Anton alternately congratulated herself for the program and criticized it – and if we’re still stuck on the perceived parking impacts and privacy concerns of tiny little starter homes, we’re truly in trouble as a city.