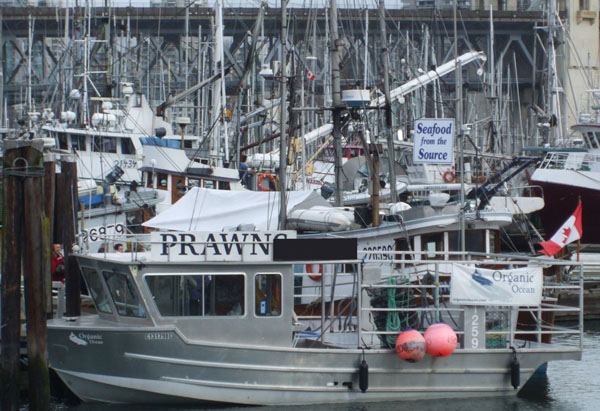 Food is intrinsically linked to place, whether it is agricultural land, rivers, or oceans. Interest in sustainable foods and food security has increased across Canada: municipalities have been integrating community gardens to allow residents to grow their own food. Towards this end, the City of Vancouver introduced several pocket farmers markets last summer to increase access to local, organic food.

The David Suzuki Foundation is building on this momentum, running its first ever Sustainable Seafood Walk on Granville Island on Saturday, February 25th to introduce people to the wealth of ocean-based food choices available in Vancouver. Reinforcing the region’s reliance on local seafood in one of Canada’s most popular public spaces, the self-guided walk included stops at the fishing docks (Seafood from the Source and Organic Ocean fishermen) and several shops on the island (Lobster Man, Longliner Seafoods, The Salmon Shop, and Seafood City). Cooking demonstrations, featuring sockeye salmon and pacific spot prawns, were held at the Pacific Institute of Culinary Arts.

“We knew that Granville Island and Richmond were areas where lots of new immigrants and families were buying seafood. They’re areas of high seafood consumption, where these products are culturally significant,” says Sophika Kostyniuk of the David Suzuki Foundation.

Fisheries have been an important issue for the Foundation since it began in 1990: some of its first projects involved protecting the health of oceans and marine species such as salmon and clams. Over the years, their work has broadened from policy development to building capacity and forming coalitions with other organizations interested in protecting fisheries. In recent years, the Foundation has worked with fisheries, retailers, and consumers to change consumption habits. Their SeaChoice Business Guide helps retailers include a sustainable seafood strategy into their business practices.

Sample from The David Suzuki Foundation's Canada's Sustainable Sushi Guide that is available for download.

Among the Foundation’s outreach efforts are several guides to help consumers choose more sustainable seafoods: Suzuki’s Top 10 Sustainable Seafood Picks, Canada’s Seafood Guide and Canada’s Sustainable Sushi Guide. All are downloadable and designed to be portable, so that you can carry them while you shop or eat at your favourite restaurants.

Beyond listing seafood under the headings of Best Choice (green-listed), Some Concerns (yellow-listed) and Avoid (red-listed), the guides also require a higher level of engagement than merely choosing a shrink-wrapped package to add to your cart. For example, in order to choose the ten most sustainable seafood products, you need to ask your grocer, fishmonger, waiter, or chef how and where the item was caught. Pacific cod caught in Alaska by bottom longline, jig or trap are a top pick, but Atlantic cod is not. Fishing techniques can have devastating effects on the environment; while closed-containment farmed salmon is sustainable, open net pen farmed salmon is produced in ways that may harm wild salmon stocks.

I asked Kostyniuk whether consumers feel comfortable asking for sustainable products and whether language barriers might be a problem.

“Yes, that was one of the first issues we identified right off the bat,” she admitted. This week, several of the materials will be launched in traditional and simplified Chinese, and Japanese and Korean translations could be on the way soon. “We still need the French version, too.”

But Kostyniuk says that both consumers and retailers are searching for healthy, sustainable options and are asking questions about the products they buy.

“Asking questions about where the products come from is sort of the next level of commitment for people,” she says. “It’s making an impact already, and we just want to make sure that the oceans and the fisheries are here for generations.”

“It’s the consumer, and the shops, and challenging them,” says Julian Bond, Executive Chef and Program Director at the Pacific Institute of Culinary Arts. “There are some stores out there that don’t follow [SeaChoice or OceanWise]. You know, because profit is obviously very important. But if we all try to stick to the green-listed products and avoid the red, we’re off to a brilliant start. ”

All of the featured retailers and fishermen on Granville Island were extremely knowledgeable on their products, fishing stocks and methods. At the Lobster Man, tanks of lobsters and crabs flanked bins of mussels, clams and oysters marked as Ocean Wise products. Helpful staff handed out free recipes and information about making sustainable choices. The Salmon Shop featured beautiful arctic char, Alaskan halibut, and sablefish, among other green-listed choices.

Randy Cramer of Seafood From the Source had samples on hand of his salmon candy, cold smoked salmon and cold smoked tuna loin. He fishes every summer on the northeast tip of Haida Gwaii and offshore Vancouver Island, and the fish is smoked locally.

“People know the fish comes from “Captain Randy’s boat”. It’s kind of goofy, but that’s who I am,” Cramer beams. “This is the job that I want to end my working career with. I can’t see doing anything else.”

Cramer and Bond both extolled the high quality and sustainability of fish that is frozen quickly at sea. While consumers tend to turn their noses up at frozen fish, Bond says that “fresh” fish sold at markets is at least eight days old and has been flown hundreds of kilometers in Styrofoam containers, which can only be used once due to health regulations. Flash-frozen fish is cleaned and frozen before rigor mortis sets in, and can be packed in cardboard and shipped on trains.

“The quality and the texture of the fish, and its colouration, is the best you can buy,” says Cramer. “Before the whole sustainability issue became as important as it is now…back then, this always considered the export quality, the top quality, which sadly didn’t always get to our local market.”

“Beautiful sushi-grade ahi tuna has been previously frozen,” Bond points out. “By law. There is no such thing as never-been-frozen tuna in Canada. With sushi we freeze all our salmon but nobody complains about that…it’s tasty. It’s about changing our mentality.”

Events like the Granville Island Sustainable Seafood Walk illustrate the deep connections between place and food: we think of Vancouver as a place of stunning natural beauty, but tend to forget the contribution of its agricultural and ocean-based foods to our daily lives.