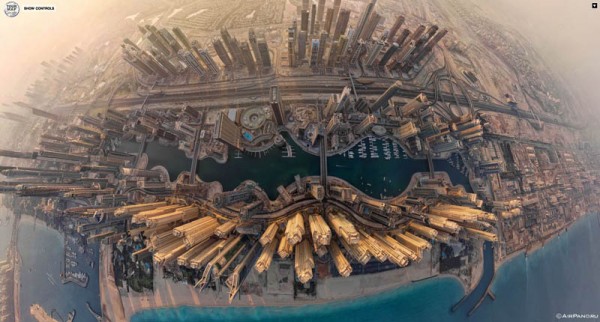 Dubai Marina is one of the defining places of its own city, while also being remarkably similar to Vancouver's False Creek. (Image: Dmitry Moiseenko - AirPano.com)

On April 19th, developer-designer Stanley Kwok sat down with architecture critic Trevor Boddy as part of the Museum of Vancouver’s presentation of the Maraya Project to discuss his perspective on the built landscape—more specifically his two most notable waterfront mega-projects: Vancouver’s Concord Pacific in North False Creek and Dubai’s Emaar Dubai Marina.

Part One of this InDepth Feature, explored the career and political wrangling used by Stanley Kwok to become one of the most influential players in shaping North East False Creek’s Concord Pacific—Vancouver’s most iconic development model. In this part, we will peer through to the other side of the looking glass at the United Arab Emirates and see, not only how the urban design of Vancouver was emulated in Dubai Marina, but how Vancouver planning and planners became an integral and lasting influence on the new Middle East.

Mind you so are other "isms". (Image: Imre Solt)

The City as Architects’ Play Thing

Kwok describes the Emirates as an “Architects Paradise” where designers are seemingly limited only by what pleases their client. There are few regulating bodies especially when it comes to development, and there is seemingly unlimited funds from the Sheikhs, owners and power brokers of the Emirates. Generally, their tastes are for the biggest and best of what money can buy. The Oil wealth of the nation allows them to be flashy and ostentatious with buildings reaching the very limits of engineering and/or being made of rare luxurious materials.

As such, the Emirates is a display yard of architectural and development types, attempted icons, engineering marvels, and more than its fair share of what the likes of comedians John Oliver and Andy Zaltzman refer to as “stupid building syndrome” [Video/Podcast Exerpt]. Furthermore, as long as a project can be successfully argued to those with the power and money, it can and will likely be built. Referring specifically to his two large developments, Kwok constantly compared the ratio of public meetings between the two projects—120 for Vancouver and zero for Dubai.

The resulting form can be chaotic, but also has a regularity of multiple developers trying to make iconic towering structures, competing in a veritable forest of other supposedly iconic towers.

Dubai Marina from the other side fo the Freeway. Density yes, but still dominated by the car. Note, Palm Jumierah in the background. (Image: Hatim Saleh choppershoot.com)

Emaar is one of Dubai’s largest developers, and their Dubai Marina is a grand example of the trend of “luxury through simulacra”. In this development, the replication False Creek’s waterfront amenities and building types are so effective that, in some places, it is hard to distinguish the two.

The differences, however, are most poignant where Dubai Marina follows the general Emirates penchant for grandeur and opulence. For example, the buildings within the development have few, if any, limits for height or spacing while the Marina itself is truly a “false creek”, in that it is completely artificial—dug from the desert and back filled with seawater with dredged channels to connect to the Gulf of Arabia.

With the power and will to construct virtually anything, the Sheikhs began looking at ways of building the best that the world had to offer within the Gulf States. Sometimes it involved bringing “Top Men” to the Emirates, but initially it involved jet-setting around the globe seeing what existed. Many of the Emirati leadership had been educated in the West, and became accustomed to North American styles and forms of living.

One such well-connected Emirati, Mohamed Ali Alabbar —Chairman of Emaar— was traveling to experience North American examples of neighbourhood developments in the late 90s, when Kwok was given the offer to hold a last-minute presentation to show off the successes of Concord Pacific in False Creek. Taking advantage of this unique opportunity, Kwok was able to sell the luxury of False Creek’s density and waterfront living to the Emaar representatives by taking them out into the middle of the inlet on a yacht while describing the project. 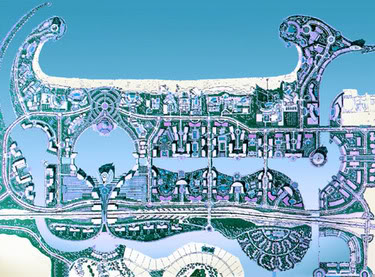 1998 Concept Plan of Dubai Marina. This is relatively close to the final product, save for connecting inlets behind the freeway. (Image: Emaar)

The rest is history. Vancouver’s waterfront model impressed Emaar so much that they replicated many of the design elements down to the minute details. The urban seawall in Dubai even has inward facing railings from the same manufacturer as those used in North False Creek.

The grander design of the marina was to dig a trench into the Emirati desert—nearly the width of False Creek in some places—that would encircle the island of tower developments. Kwok’s design concepts of the “Lagoon Plan” little more than a decade ago quickly became “approved” designs and building was focused around developments that matched his concept plan.

The original architect’s design for the inlet was for only a thin watercourse that would allow yacht traffic into and out of the site. However, Kwok was adamant that the width had to be enough to feel like an inlet and not a canal, in order to gain any aesthetic public value out of the investment. The end product is still thinner than False Creek but maintains a degree of openness.

Most developments in the Emirates are metaphorical islands onto themselves—internally connected but only attached to their larger context via an auto-dominated freeway system. There are also the notable actual island and peninsula developments, such as the geometrically fetishistic planning of Dubai World and Palm Jumiera, that are as artificial as the man-made Dubai Marina inlet, but for the most part are void of any consideration as to how they work as a integral part of the city, beyond being objects in and of themselves.

The structure of Dubai is relatively linear, running parallel to the coastline and growing from freeway infrastructure that developed north and south from an old fishing village port based off an inlet in the centre. Yet, surprisingly, as the Emirate responded to growth, it uncharacteristically spent resources on developing an elevated metro along its main freeway route.

Dubai Marina includes two stops along the transit alignment. While development is strongly densified around these transit hubs and connected by pedestrian bridges, the stations are located adjacent to— and, not inside—this relatively large development.

The development mainly connects to the city through the freeway at two interchange points and has a hierarchical network of streets within the site that feed off an arterial ring road offset from the freeway. The internal connectivity within the ring road is clear, however. While the scale of the block structure is still a far cry from Vancouver’s, it is vastly more human scaled than much of Dubai – outside of the traditional organic arabic village at the city’s core. Six bridges cross the Marina and rational block structures are defined within this system.

The relative rational structure owes to a bit of learning from—and altering of—Vancouver’s mega-project planning. Three Vancouver innovations, in particular, are found in the Dubai development:

First, the properties were subdivided and sold to multiple builder developers. Kwok felt this was done too early in the process with planning developing very closely to a concept vision plan as opposed to a more refined planning document. It is also important to note that the “ownership” model was one of the first of its kind in the Emirates and the Middle East. We’ll get into the social impacts of the latter in the next part, but from an urban design standpoint, subdividing the blocks into smaller parcels within a street structure inhibited the tendency—especially in this region— for developers to create independent, internally-oriented superblocks.

Second, Dubai Marina tackled the problem of underground parking differently than False Creek, where density regulations in Vancouver’s zoning necessitated costly “tanked” parking structures below grade. In Kwok’s design, the ring-road and other major roads were raised to allow structured parking to be built at surface but not create blank streets. Along the Seawall, retail and residential units wrap the “front” of these parking structures, while the streets run above.

Finally, the podium-tower building type —the most evident similarity— has differences that are indicative of the relative scale of the Emirati development. Although the tower-on-podium form is carried forward in Dubai, the heights and distances between towers are strikingly different. Vancouver’s tallest building is 250m, where as the buildings on the Marina are often 50m beyond that – at about 60 stories. Moreover, towers in Vancouver are limited in distance from each other by more than 80ft to maintain peekaboo views and reduce overlook and shadows from neighbours. In contrast, the Dubai Marina towers are packed closely together. This is not necessarily a bad things given that shade is beneficial in such a hot climate. Nonetheless, zoning does not limit distances.

Kwok suggested that the scale of the spaces created by the artificial inlet in Dubai became too narrowly enclosed as the heights of the buildings grew along the edges. While Kwok feels that the disproportionate scale of the space may have been an oversight, he was clear that he was an opponent to the kind of view-cone height regulations that keep Vancouver towers from blocking views. In fact, he argues that the 1989 policy that forced a limit to Vancouver’s building heights is one of his most hated of heavy handed city policies due to its lack of trust in designers’ and developers’ intent to build positively.

The towers of Dubai Marina reflect off the water at night. (Image: hsmadi)

Vancouverism in this new setting—with its vastly different development structures—is distinct, but still representative of the models and ideas produced by Kwok and others out of development the Lower Mainland in the early 90s. High density neighbourhood development in this new contexts allows us a cypher to look at Vancouver’s urbanism and Dubai Marina, specifically, gives us an opportunity to see how a city builds without a strict development regimen of policy and regulation.

In the truest and multiple meanings of Maraya – the Arabic root for mirror and mirage – we are able to view a reflection of our urbanism, as it morphs and distorts in a new context.  We reveal ourselves as we reflect on others; hopefully we will be able to learn from both.

Don’t miss the third and final part – Part Three: Reflections on Place and the Power of Urbanity – that will look at how Vancouver designers became important to Middle East design, how the power of public space and sense of “ownership” has changed the way this region sees itself as an urban community and culture, and how reflections from places like Dubai affect the way Vancouver matures as a city.

Stanley Kwok and the Two False Creeks: Part One – Reflections on Developing a Waterfront

*
Brendan Hurley is a local urbaner who focuses on planning for adaptive neighbourhood change. His recent work has been internationally focussed, but is strongly rooted in his native Vancouver. Living and working out of the heart of downtown, he remains keenly focused on the region’s development and history.  Brendan is acting as Assistant Editor of Spacing Vancouver, but also consults as director of the UrbanCondition design collective.