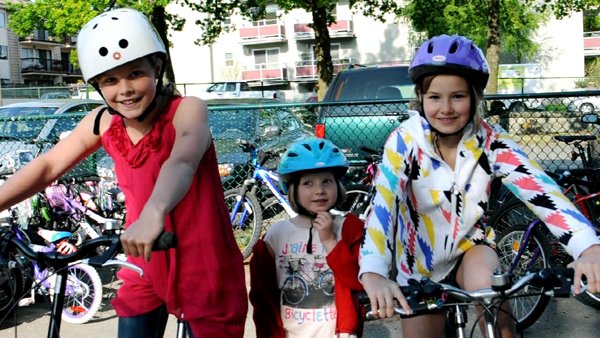 Chatting with riders who regularly bike to school.

The newly re-branded HUB: Your Cycling Connection led Bike to florida traffic school online Week from May 14 to May 18; this is their first year of organizing the event as a separate entity from Bike to Work Week.

Bike to School Week promotes a healthy lifestyle that reduces carbon dioxide emissions by choosing cycling. It is also a social act, as students ride among friends and family while building independence and appreciation for outdoor public spaces.

As part of the celebratory week of cycling, L’École Bilingue Elementary held a Bikers’ Breakfast from 8-9am on May 16. The social event was packed with bikes of all sizes, spilling over the racks and into vacant spaces on the ground and along the fence. Students and parents arrived in groups on bike and quickly formed a long line, chatting amongst themselves as they waited for freshly prepared nourishment. 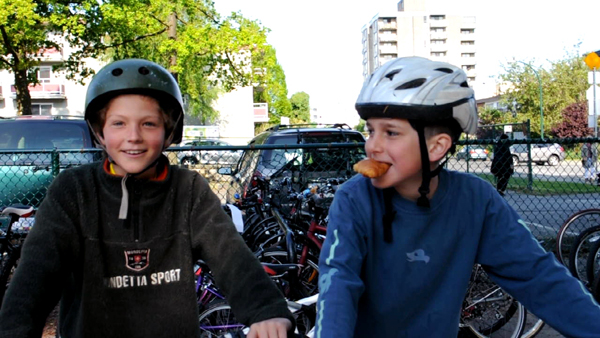 Two pals joke around with each other as they compare their bikes.

L’École Bilingue is not the only school that promotes cycling year round – Windermere Secondary School is organizing a bike train and breakfast at the end of May, as well. As part of Car Free Day, Queensborough Middle School in New Westminster will be hosting a cycling celebration which Steph adds will be “a new event, but a lot of energy has been going into active transportation at this school over the last couple years, and we’re expecting it to be a success!”

And it doesn’t stop there: Cleveland Elementary in North Vancouver is hosting their own Bike to School Week from June 14 to 18. Last year, over three hundred students rode to school on their busiest day. 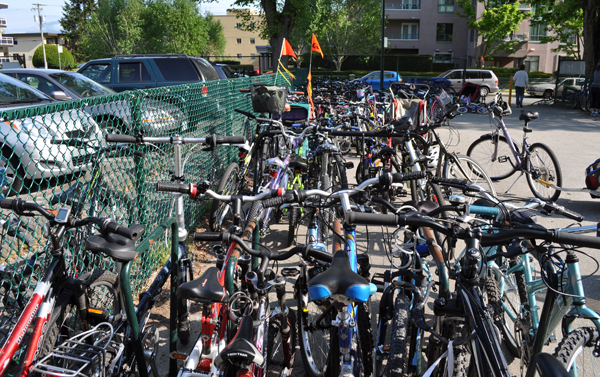 A sea of bicycles at L'Ecole Bilingue Elementary during The Bikers' Breakfast.

Parent organizer, Sharon Paterson, is a mother of two girls at L’Ecole Bilingue in Grades 1 and 3. Biking is not new in her free-wheeling family—regularly covering the three kilometres. “There’s a lot of biking,” Sharon says with a smile, “and the kindergarteners ride with their parents in chariots.” Over five hundred students are in attendance at this school with approximately a hundred of them riding to school on busy days.

A group of students in the upper elementary grades gathered around on their bikes and happily shared stories of their commute. For most of them, it takes about fifteen minutes to get to school and some commented on the issue of bikes in general tending to be heavy for their age group.

When asked why she bikes, one of the girls replied, “I really like biking to school because it saves the environment, you don’t have to pollute the air, and it’s faster than walking. So who doesn’t like biking?” She biked to school with her dad, who recently bought her a new bike that weighed less than her previous one. Standing nearby, her friend demonstrated how to fold her bike in less than thirty seconds and said “it makes life easier”.

On May 9th, over nine hundred schools in the U.S. celebrated cycling on their first ever country-wide Bike to School Day. Although Canada does not yet have a designated day, a growing number of Canadian cities are gaining a reputation for being more bike friendly. There is clearly an emerging cultural shift away from automobile dependency and toward cycling. Some cities, such as Chicago, are progressively making changes to their transportation plans to accommodate active transportation, while others are just beginning to get their boost. 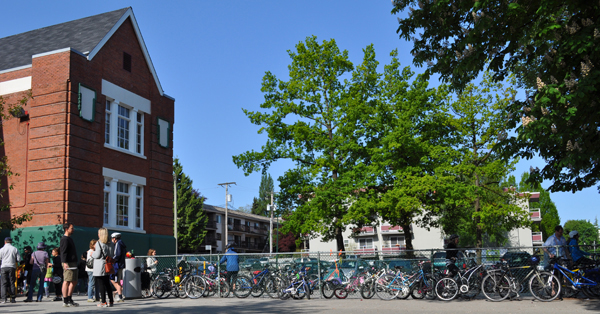 L'Ecole Bilingue Elementary after the 9am bell.