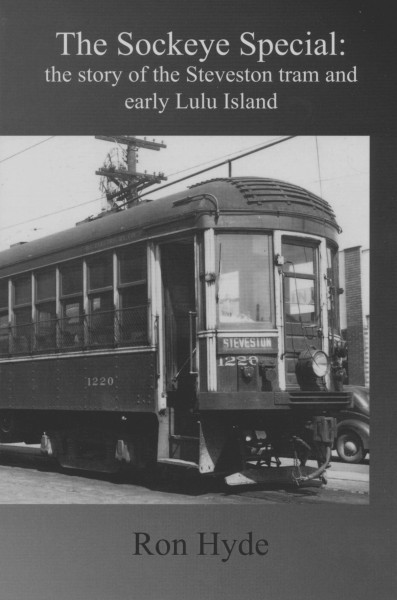 Slowly but surely, Metro Vancouver is recreating the original interurban rail network developed by the BC Electric Railway, albeit in a different and rather more expensive form. The Expo Line that now connects Vancouver and New Westminster to the south of Burnaby Lake largely follows the right-of-way of the Central Park Line. The Millennium Line is essentially a re-imagining of the more northerly Burnaby Lake Line, with an altered path along the Grandview Cut and Lougheed Highway, avoiding the route of the since-constructed Trans-Canada Highway.

And it was the Vancouver and Lulu Island Railway, affectionately known as the ‘Sockeye Special’, that from 1902 until 1958 linked Vancouver with Richmond and Steveston. The Canada Line is a truncated version of this line that used to run from the corner of Davie and Richards across the second Granville Street Bridge (demolished 1954), along W. 4th as far as Fir, then down the Arbutus Corridor, and across Richmond. It followed present-day Garden City Way as far as Granville Avenue, crossed west to Railway Avenue, and then headed straight south all the way to Steveston. The wide curves in the road on Granville provide some of the only evidence that this route used to be a busy interurban line. 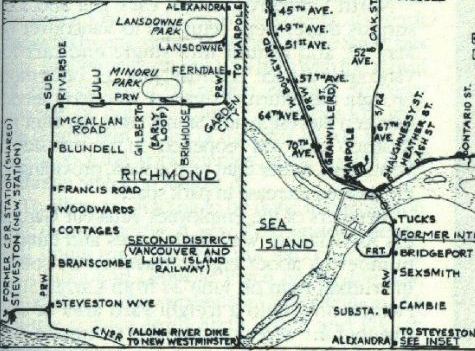 Courtesy Story of the BC Electric Railway, via Matthew Laird

Author Ron Hyde focuses on the Richmond portion of the line in his new book The Sockeye Special. Recounting the origins of the book, Hyde told me “I belonged to the Richmond Heritage Railroad Society who formed to finance the construction of a track from Steveston to London Heritage Farm, but after complaints about the potential safety, noise, etc. the Council shelved the idea.  I suggested to our group that we use the remaining funds to help finance a book on the Sockeye Special and offered to write it.”

As Hyde notes in the book, “the Sockeye Special was an integral part of the transportation, business and social life of Lulu Island.” The Canadian Pacific Railway began the service on June 30, 1902 with two trains per day running between Vancouver and Steveston. While the line was created primarily to serve the canneries in Steveston, the CPR found that the companies preferred putting their products directly onto ships bound for overseas markets. So, just three years later the BC Electric Railway Co. (BCER) leased the line from the CPR, electrifying it in 1905, in just three months.

The initial cost of a return trip to Steveston was 85 cents, with trains running every half hour in rush hour and hourly at other times. The journey took only one hour and 15 minutes, which is amazing considering that today the same route (Canada Line and #410 bus) takes a little under an hour, requires a transfer, and costs at least $5 for a round trip. Furthermore, the service used to run a full 19 hours a day—from 6am until 1am.

Freight trains also ran on the same track, using the same crews. Richmond farmers would ship their milk in ten gallon milk cans to Vancouver in the morning and have them returned in the evening, filled with spring water. “Fresh drinking water was a precious commodity to the Islanders” prior to the installation of water mains, notes Hyde.

The Lulu Branch began at Eburne Junction at the north end of Lulu Island, with eventually 18 stations built along the 13-kilometre route. Stations were named after landowners who donated land in order to have the BCER install a stop nearby.

While it might be hard to imagine today, Steveston was one of the larger communities in the region at the turn of the century, with a population of up to 10,000 during fishing season. Hyde recounts that like Vancouver, Steveston had its own opera house as well as hotels, saloons, and gambling houses. The line also ran past the two racetracks on Lulu Island: Minoru Racetrack (later renamed Brighouse) and Lansdowne Park. The BCER would run express trains known as “racing specials”, which skipped many of the stops in Richmond. One of the fascinating details in the book is that Minoru Racetrack was also the site of the first airplane flight in BC.

During World War II the trains helped carry workers from Vancouver and Richmond to Marpole, where buses would take them to the Boeing construction factory on Sea Island. Ridership peaked during the war after gas rationing was implemented. Hyde told me that when he first started working at Richmond City Hall, he would take the bus to Marpole and then transfer to the tram that would take him to Brighouse station.

As we all know, Vancouver’s rail system saw its demise in the 1950s, with the BC Electric’s “Rails to Rubber” program converting most of the streetcar lines to trolley bus lines. Sadly, the interurban lines were never replaced, and Richmond lost its rapid transit connection to Vancouver for the next 51 years.

Hyde says that he is not optimistic about seeing surface rail return to Richmond. “Translink has a fixation on the above ground SkyTrain system.  The Richmond Heritage Railroad Society presented a study to Bombardier and Siemens when they were bidding on the SkyTrain tender.  They made two tenders, with the second one showing that at the River Rock Casino, by switching to LRT they could have supplied LRT to Steveston and financed a track to run the tram from London Heritage Farm to Britannia Heritage Shipyard for the same price as the SkyTrain just to downtown Richmond.  But TransLink was not interested.  They would also have saved countless millions of dollars, as the LRT could have travelled on the Garden City transit right-of-way (where the tram used to run)  and they wouldn’t have had to buy the many properites all along No. 3 Road.”

In order to appreciate the importance of an expanded rail system for our region, we need to review what we had in the past. I recommend The Sockeye Special as an introductory look back at the stories and history of the interurban in Richmond, as well as the efforts to bring heritage trams back to the city. If we can understand what made the interurbans great, perhaps there is hope to bring them back in the not-too-distant future.