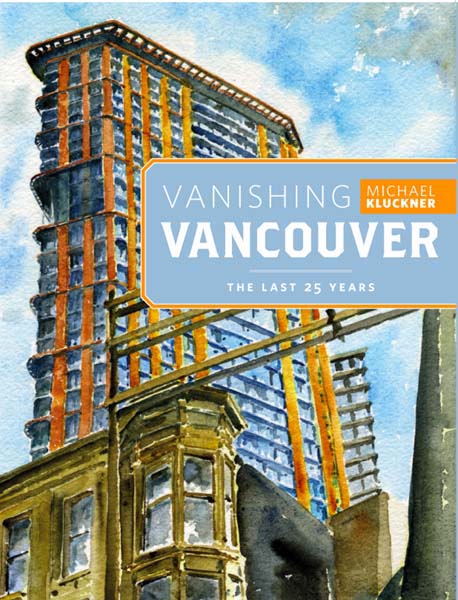 “As the eighties progressed , the city – especially its residential areas – endured a demolition spree. The theme of my earlier Vanishing Vancouver book was my anger at the disposal of beautiful houses and gardens, cast away as if they didn’t have any value at all. That their replacements seemed inferior to my eye just compounded the outrage. There seemed to be so little appreciation by residents old and new of Vancouver’s houses, no environmental or aesthetic mindset that would guide the builders into even preserving trees…”

– Michael Kluckner, from the book’s preface

In a town that at times can seem like it has had the air sucked right out of it – think the new Canada Line during rush hour – Michael Kluckner is a breath of fresh air. Not unlike other local historians such as Hal Kalman, John Atkin, Bruce MacDonald, and the late Chuck Davis, Kluckner is a passionate advocate for Vancouver, using his words and watercolours to distill what is unique about our particular environs here on the Northwest Pacific Rim. Born and raised in Vancouver, he has borne witness to many changes over the years. As such, Kluckner has continued to use his acute eye to capture artful vignettes of Vancouver’s finest architecture and landscapes as well as the many instances of houses and buildings that have since been demolished.

In his new book—Vanishing Vancouver: The Last 25 Years—he continues his tribute to Vancouver’s built past in anecdotal prose and captivating paintings. While his first book in 1990 commented on the slash-and-burn real estate phenomenon in the build up to Expo ’86, this time around it is the build-up to the 2010 Winter Games and beyond.

Moving past smaller details, however, Kluckner speaks to themes that resonate with current discussions taking place around the city.  Asking what large projects like Woodwards mean for the city, for example, taps into the ongoing debate about the appropriateness of high-density tower developments in certain Vancouver neighbourhoods. As if to drive the point home, Kluckner puts his painting of the mega-project by Westbank on the cover of the book, showing it towering over James Garden’s modest-sized apartment building from the time of the City’s founding, and eloquently framing his argument that the former is out of scale with the surrounding context.

Kluckner remarks in his preface that the danger of such a book is that it immediately becomes an anachronism – ‘instant history’ as he himself felt his book Vancouver Remembered in 1990 had become the moment it was published. In his new book he notes, for example, that the original 1957 Semmens and Simspon branch of the downtown Vancouver Public Library had been re-adapted as an HMV, when in actuality it now lies vacant at the corner of Burrard and Robson Street. Similarly, his painting of the Ridge theatre was done prior to the announcement that it is to be demolished for a new residential development.

Kluckner’s wit and guts to ‘call them as he sees them’ has never been more succinct and more timely, especially as he calls out the real-estate speculators and developers for continuing to grossly overvalue land while undervaluing buildings.

Different than his first book though is a heightened sense of urgency—particularly in the breadth of his presentation of the subject—as if he wanted to make sure that the entire taxonomy of houses in the Lower Mainland had been accounted for before some great deluge washes them away. Towards this end, approximately 90 pages into the book, Kluckner staggeringly starts categorizing the various styles and eras of single-family houses built in Vancouver since its founding. Neighbourhood by neighbourhood, he shows the predominance of certain styles over others over the course of time, such as Victorian, Queen Anne, Craftsman, California Bungalow and, of course, the Vancouver Special.

Following this visual taxonomy, which Kluckner has also made available online here, is the real treasure of the book – ten cutaway cross-sections of several of these early housing types, including the starter house, Tudor, Craftsman, and again the Vancouver Special. Each is rendered in watercolours with details down to where the house cat would sit. He brings us up to date with the last few which include the typical Vancouver three-storey walk-up, and a present day condo. Other treasures include a wonderfully rendered perspective of Grandview circa 1940, and an illustrated history of the Vancouver Special.

But the book is not without serious controversy, as Kluckner discusses such ongoing and upcoming topics as the Little Mountain Housing Project, the new Shannon Estate development, a new Westbank mixed-use, two tower development for the Safeway at Marpole, the recently sold-out Marine Gateway project, as well as new towers planned for Oakridge. But as a foil to this brick wall reality is his whimsical stab at the development community, depicting two suit-clad figures pouring cutouts of single family homes into a meat grinder, and getting extruded point towers like so much sausage.

But he also points out that all is not lost, that the City has occasionally gotten some things right – like deciding not to build the Gastown Project 200 freeway, along with supporting the adaptive reuse of such heritage buildings as the Sinclair Centre, the Waterfront Station, and the Vancouver Art Gallery to name only three. He notes that the razing of the Georgia Medical Dental building were more an exception than a rule. However, it is in the inner city neighbourhoods where he feels the essence of Vancouver is slipping away, as another heritage house is demolished to make way for another ‘McMansion’.

He also points out that while his first book was preoccupied with large civic buildings that have been lost, his new book is almost exclusively devoted to the single-family home. This in turn has informed the painted content of the book, divided as it is into themes on landmarks, the harbour, the shop, the house, the apartment, and the garden – each rendered in his discerning hand, and representing some last sprig of nostalgia for Vancouver when it was still a small town. Now, as he humourously points out, times have changed – “The solitary man talking loudly on the street is not dangerous, he’s just on the phone” and even better “Sustainability – that wonderful lifestyle we all aspire to – is shouted at us over the roar of bulldozers”.

Just as Kluckner prefaces the book with a great sense of humility, the book is also not without a sense of loss and sorrow. He admits that it is much easier to see and paint and write, than it is for an architect and planner to embody great idealism in reality.

Echoing the words of Globe & Mail columnist Frances Bula, this is a book for city lovers, and whether it’s Kluckner’s captivating paintings or his knack for telling a story about Vancouver’s lost houses, there is something here for everyone who loves our city. And with the City currently looking at removing the Georgia Viaducts, along with the soon-to-be-released findings of the Mayor’s Affordable Housing Task Force, the book arrives as a guide through a time of tumultuous change as we wander in a post-Olympics malaise.

***
Sean Ruthen is a Vancouver-based architect and writer