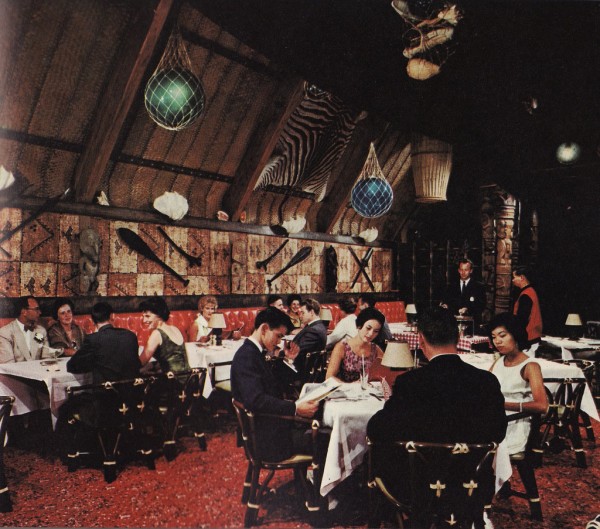 The Tiki interior of Trader Vic’s at the Bayshore Inn in Coal Harbour.
[Photo: Government of British Columbia 1961]

Going out for dinner and a drink is such a fundamental urban experience that it is difficult to remember a time when such a thing was difficult in Vancouver. However, prior to the opening of Trader Vic’s in 1961, having a drink with dinner was not easy to do in Vancouver.

Trader Vic’s came to Vancouver before globalisation brought a plethora of international cuisines to Vancouver. In the 1950s, the majority of restaurants in the city served European, Chinese, or American food, and there were few other options. Trader Vic’s was an instant hit with its Polynesian fare, and popularised the idea of serving alcohol with meals. Trader Vic’s also proved that upscale cuisine did not have to be French, and the restaurant was popular with the business crowd and the city’s elite.

Although the Trader Vic’s chain was launched in the United States, the Vancouver location was unique. One of its claims to fame was the fact that you could take a boat right to its door; although more commonly accessed by road, its waterfront location allowed for water access. Trader Vic’s was located at the Bayshore Inn (now the Westin Bayshore at Coal Harbour), but was in a stand-alone building in the parking lot. The building was decorated with faux hieroglyphs and a culturally eclectic mixture of art, although the interior décor was even more unusual. The Tiki statues nearly prevented Trader Vic’s from getting a liquor license, and only removal of some rather prominent members on certain well-endowed masculine figures allowed Trader Vic’s to serve the fruity cocktails for which it became famous. 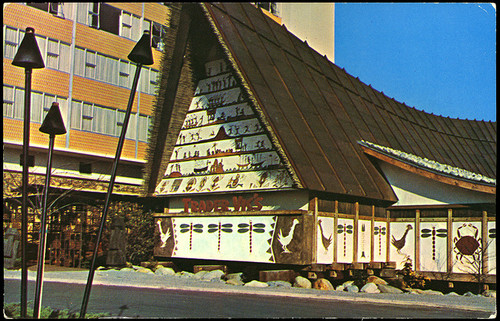 1970s postcard of the Trader Vics exterior. [Photo: from the collection of Mimi Payne Arkivatropika.com]

The most popular drink at Trader Vic’s was the Mai Tai. Victor Jules Bergeron, Jr., better known by his nickname, Trader Vic, claims to have invented this fruity rum concoction (although that claim is disputed by Donn Beach, who makes the same claim). The Mai Tai became indelibly linked with Polynesian cuisine while Tiki-themed restaurants were at the height of their popularity; it has been called the canonical Tiki drink. It would have been served with such dishes as Chicken Cordon Bleu, Javanese Sate, or Mahi Mahi, all favourites at Trader Vic’s in Vancouver. Mai Tais pack a punch, a reminder of an age when alcohol consumption was much higher than it is today.

Tiki culture was popular in Vancouver throughout the 1960s. Although loosely inspired by the Western imaginary of Hawai’i, it was widely recognised as a style of American kitsch. Tiki culture faded, however, and  Trader Vic’s lost its cool long before it closed its doors in 1996. More recently Tiki culture has made a comeback as a retro-pastiche trend, and The Waldorf Hotel has opened a Tiki bar on Hastings Street. Although viewed with a certain degree of irony, the Tiki Bar at The Waldorf has managed to recapture the spirit of Polynesian cool of Trader Vic’s.

The sprawling menu of Trader Vic’s included selections inspired by Chinese, Taiwanese, and Indian cuisine, and their specialties were based heavily on French cuisine. Dishes were mostly meat, fish, and chicken, with a certain amount of pineapple thrown in for good measure. The drinks were the most important feature: fruity cocktails and tropical martinis that contributed to making Vancouver’s bar scene into one of the most interesting in Canada.