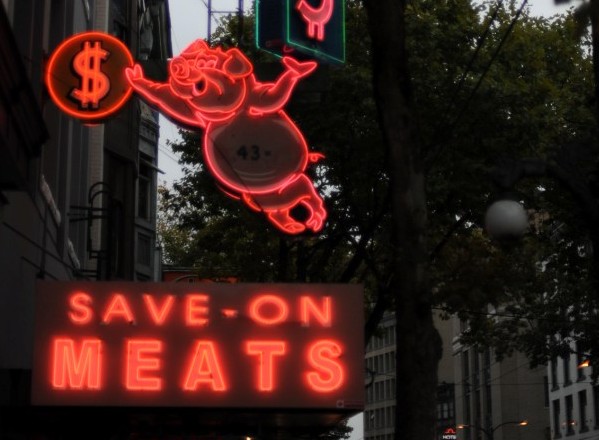 The bright pink neon sign above Save-on-Meats, with its inexplicably cheerful pig, has made the building an iconic Vancouver landmark. When owner Al DesLauriers announced that he was retiring, and that Save-on-Meats might be closing, among the many looming questions was of the fate of the infamous signage. One of the few neon signs to survive the anti-neon campaigns of the 1970s, it appeared that the city might lose one of the last remaining examples of the history chronicled in the Neon Vancouver | Ugly Vancouver permanent exhibit of the Museum of Vancouver. However, when restaurateur Mark Brand bought the endangered butcher shop and restaurant, the neon sign was saved. Save-on-Meats was reinvented, yet not so much that this influential business is unrecognisable.

When Save-on-Meats originally opened in 1957, the location at 43 West Hastings Street was still serviced by interurban trams that brought customers nearly to its door. Entrepreneur Sonny Wosk founded the business, bringing in a young Al DesLauriers to run the meat department. DesLauriers had learned to cut meat from a book, yet been in the business since buying his first meat market at the age of 19. He had bought a second on Hastings Street by the time he accepted the job offer at Save-on-Meats, and when Wosk was ready to sell, DesLauriers bought the business. Although the interurban had shut down in 1958, and the decades that followed saw local businesses close and the neighbourhood experience significant economic decline, Save-on-Meats remained a cornerstone of Downtown Eastside commercial activity.

Save-on-Meats distinguished itself as the source for cheap yet high-quality meat in the inner city core of Vancouver. As well as inexpensive cuts of meat, the butcher shop sold roasted chicken, marinated meats, and other foods ready to be turned into a quick dinner. What distinguished it from other butcher shops, though, was the fact that the mixed-use building included a diner/café. The reasonably priced fast food made Save-on-Meats a neighbourhood gathering spot and multifunctional retail outlet. The diner/café was not fancy, but served hot coffee and filling meals. 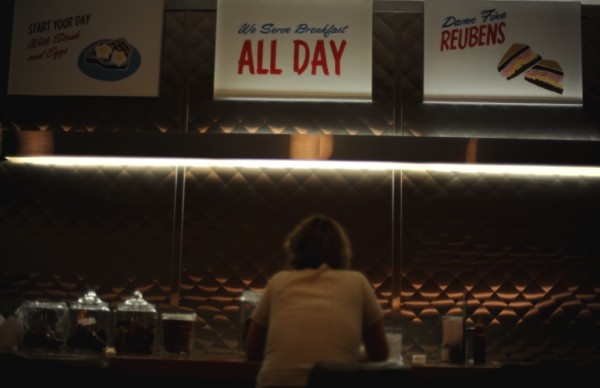 Inside the Save-on-Meats diner, re-opened in 2011 after sitting empty for nearly two years. [Image: Lenore Newman]

Al DesLauriers owned and operated Save-on-Meats from 1980 until he decided to retire in 2009. Unable to find a buyer willing to keep the business open, he finally closed the doors of Save-on-Meats on March 13, 2009. The building generated interest from condo developers who saw an opportunity to capitalise on the depressed land values and proximity to the downtown core, but DesLauriers turned down the offers. Wanting the butcher shop to survive, he refused to sell the building to anyone who would not operate the meat market. By preventing the building from turning into another gentrified condo building, DesLauriers positioned the business as the moral property of its customers. DesLauriers had made it an important part of the community, not only selling affordable diner meals and cheap cuts of meat, but also using the business to provide job opportunities to workers without many employment prospects. When it closed down in 2009, many people in the community mourned its loss.

After sitting empty for nearly two years, Save-on-Meats was re-opened in 2011. Entrepreneur Mark Brand had bought the business, adding it to a restaurant empire that includes Boneta, Sea Monster Sushi, and The Diamond. In addition to co-ownership of these restaurants, Brand also has interests in a clothing store and an art gallery. This venture was to be different, though: Save-on-Meats is being run as a social enterprise, partnering with the Downtown Eastside Neighbourhood House and Potluck Café and Catering, among others. Even though Brand has forged ties with different community organisations, his reinvention of Save-on-Meats has been controversial. The upscaling of the diner has contributed to the commercial gentrification in the neighbourhood, making it unpopular with some anti-gentrification activists. 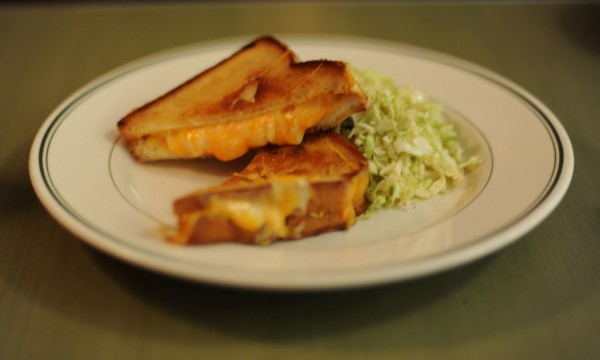 Re-imagined as a retro, 1950s style diner, the new Save-on-Meats plays off of the building’s history and the history of the old, working class neighbourhood in which it is embedded. It sells hamburgers, sandwiches, fries, and other diner classics, as well as offering a breakfast menu. However, the menu also features gentrified cuisine, such as a $12 salad with lettuce, apple, avocado, cucumber, and goat cheese in citrus vinaigrette. The soda fountain offers treats perfect for those too old to order off the kids’ menu, and the drinks menu includes milkshakes with 2oz of alcohol in each. The prices are reasonable for the cuisine, but are more expensive than those at the old Save-on-Meats. Despite efforts to mitigate the harms of commercial gentrification, it remains to see what impact this trendy retro diner will have in a neighbourhood still waging a pitched battle over urban renewal, social exclusion, and the right to food. 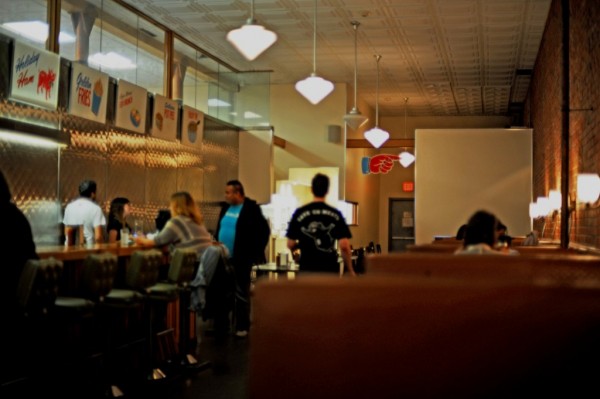