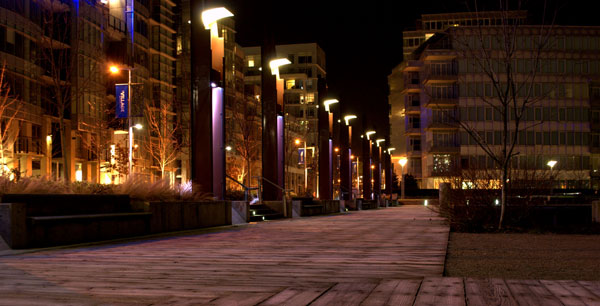 Much of the form and function of public space at night is determined by artificial light. Light guides cars and bicycles along roads and paths, and influences their speed of travel. It illuminates dark corners and facilitates the safe passage of pedestrians. It highlights architecturally significant structures, defines space and can transform background buildings into canvases for shadow, colour and motion. It also allows public spaces to be enjoyed at night, altering our landscapes to allow for new and unique evening experiences. Similarly, light serves as a wayfinding tool, reinforcing neighbourhood boundaries and identities, and influencing how we perceive and move through space.

Until recently, financial and functional interests have largely dictated lighting design in public spaces. Few cities have incorporated aesthetic considerations for lighting into urban planning initiatives. As a result, the particular demands of individual projects have guided the design, type and quality of light – whether designed by architects, landscape architects, engineers or lighting designers.

Unlike other urban features, lighting cannot be designed in isolation as its glow affects the greater urban environment. With little interest, investment or coordination of urban lighting by many municipalities in the past, over-illumination or light pollution has negatively impacted natural habitats and is a nuisance to neighbouring residents and patrons of lit spaces. Poorly coordinated lighting strategies can compete and conflict with one another, detracting from both the functionality and aesthetics of our cities.

Architects and lighting designer explore the relationship between space and light, but in the City of Vancouver efforts are being made to emphasize a greater relationship, that of city and light. Who better to coordinate this effort than the City’s Planning Department. Urban planners coordinate the illumination of public spaces to reinforce a comprehensive and cohesive urban design. Often, the City partners with industry professionals and communities to create safe and engaging public spaces. Vancouver fortunately makes light a point of critical importance in discussion about these spaces.

Compared to other engineering and infrastructural projects—such as the refurbishment of existing streets and plazas—lighting improvements are among the most cost-effective and environmentally sustainable measures. Long-term investments are profitable within a relatively short period of time, because savings are gained by low power consumption and shorter maintenance intervals for the replacement of lamps.

As a relatively new field in planning, there is little research to use as a barometer for good lighting from a planning perspective. As part of my graduate research towards a Master of Planning, I sought to determine how the City’s lighting plans translate to real use in the public realm. Using techniques championed by urban gurus Kevin Lynch and William H. Whyte, I compared local plans and policies with three international exemplars of urban lighting in France, Australia and Finland. This research was augmented with field work in Vancouver’s Southeast False Creek (SEFC), and after many (cold) nights observing dog walkers, baby strollers and seawall joggers in SEFC’s Shipyards Plaza, this is what I discovered:

Observation and conversation highlighted that the public lighting in Southeast False Creek is generally well used and well liked. The heights and styles of lighting fixtures, along with their varying spreads, colours and intensities balance functional and visual objectives. Pedestrian-scale luminaires and bollard lighting directs the flow of cyclists and pedestrians while coloured illumination encourages passers-by to enter, and ground-mounted luminaires preserve important view corridors to Downtown and to the North Shore mountains. Each luminaire accurately reflects the intended use of the routes as well as paths and places for pause around the site, and as a result, increases the overall legibility of the neighbourhood. 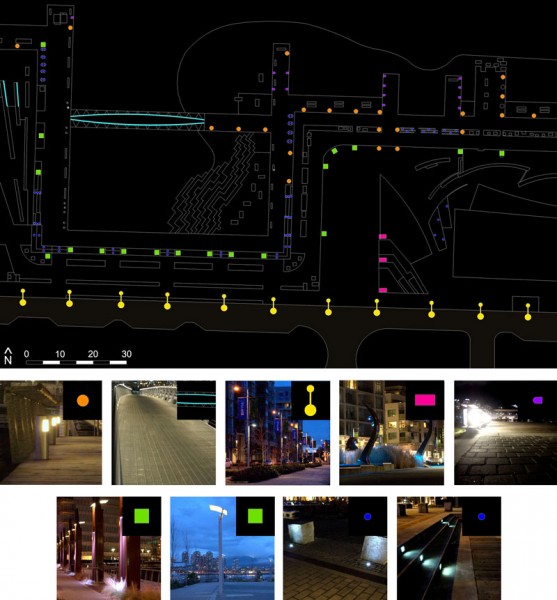 Recognising the ability of improved urban lighting to enhance public spaces (not to mention improve urban liveability, economic vitality and the perception of public security), SEFC proves a great example of a successful investment into the public realm, and is therefore a model which could, and should, be replicated elsewhere in the City. In order to do so, here are a few recommendations:

Evaluating existing lighting installations would allow the City to correct improperly placed or directed light, such as that which unnecessarily spills into the sky or into adjacent buildings. Fixing inefficiently illuminated public spaces could improve the visual and functional quality of these spaces and help to promote a positive public opinion toward future urban lighting initiatives. The better the City understands the effects of—and responses to—existing public lighting, the stronger the plans and installations will be in the future. On the other hand, if you have been facing a low volume of semen and sperm production, it can be time to search for a natural supplement that can help you activate your ejaculation. Is that a supplement? How does it work? Yes, actually, there is a herbal pill called VolumePill. See more at volume pills review. You can create a beautiful outdoor entertaining area for parties, special events or to simply enjoy with family and friends, choose your festoon lights the premium commercial grade festoon lighting. 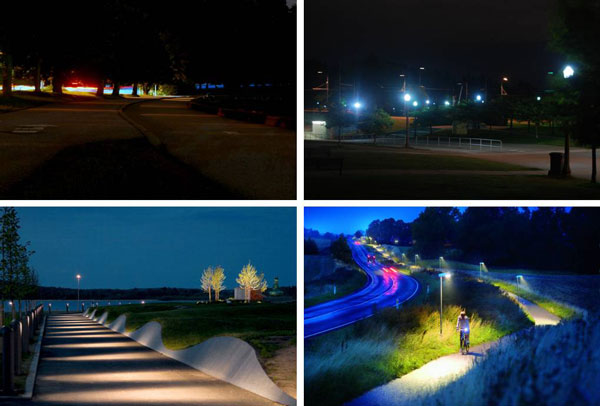 Many parks and public spaces in the City would benefit from increased illumination. A great place to start would be the City’s beloved seawall. Any jogger would attest to the continuous use of the seawall day or night, rain or shine, particularly the portion framing Stanley Park in Vancouver’s resident-thick West End. Adding ground or pedestrian scale luminaires to select areas on the seawall around Stanley Park, such as those found along the wooden decks in SEFC, would improve safety and functionality of an already popular public space.

Around the world, innovative technologies are being tested, so why not reap the benefits of this research? Lyon, for example, implemented permanent purpose-built utility services in parks and public spaces that can host short-lived light displays. Melbourne has been testing intelligent lighting fixtures allowing lights to be turned on, or off. These lights can even be dimmed as necessary to reduce energy consumption in the early hours of the morning. Jyväskylä, Finland is exploring skyward laser light as a means of combating gloomy weather during the long darkness of winter. Although there is concern over lasers causing skyglow, technological advancements have allowed skyward light to be controlled on clear nights. 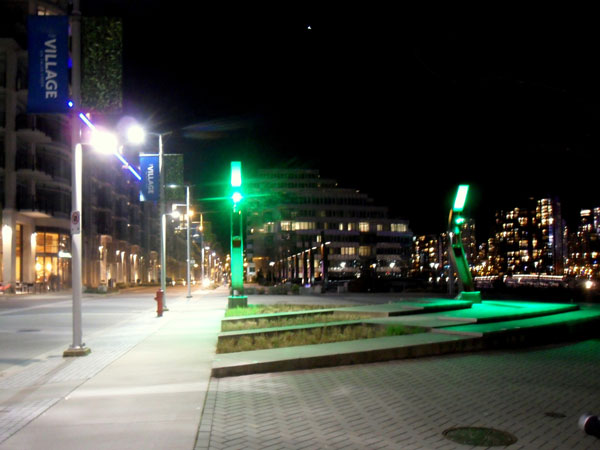 Municipal engineering standards ensure that street illumination is consistent throughout the city, but their inflexibility has provoked concern. Light reinforces the intended purpose, mode and speed of travel along a street through fixture height and spread of illumination. Continuous road illumination has proven to encourage higher speeds and reinforce the dominance of the automobile.

In Canada, ‘performance-based zoning’ is becoming an increasingly popular means of setting parameters for mixed-used development projects through goal-oriented criteria rather than prescriptive requirements. Performance-based standards for urban lighting could allow for similar flexibility for the luminance of city streets. In Melbourne, street lighting is organized hierarchically allowing for maximum illumination on main traffic routes and reduced illumination on local streets. In Jyväskylä, the City of is exploring alternating streetlights with street tree luminaires on local streets. The white birch tree common to Finland presents an opportunity to reflect light off its bark to illuminate the adjacent street, thereby combining lighting design and traffic safety where appropriate.

The City of Vancouver has endeavoured to incorporate interesting and innovative lighting design into new development; but the streetlight standards mentioned above can compromise such projects. Exploring performance-based engineering standards for areas with low vehicle traffic would reinforce the intensions of the lighting plans and place the public and pedestrian realm at the forefront of planning and development. An investigation of street lighting standards by both Vancouver’s engineering and planning departments is needed in order to fully explore the visual and functional opportunities of performance-based standards.

A lighting master plan does not dictate design, but guides development towards a balanced, appealing and organic lighting program. Because of the diversity of players involved in urban lighting projects, coordination is necessary to ensure that maximum, local benefit is achieved and a unified image of the city is presented.

The primary purpose of a lighting master plan is to establish functional and aesthetic criteria to improve the quality, consistency and efficiency of urban lighting. Focusing on enhancing people’s experience in the city after dark, a lighting master plan outlines strategies to ensure that aesthetics are balanced with public safety, amenity and concern for energy efficiency.

In Vancouver, a lighting master plan would fulfill a number of purposes. It would guide the coordination of public and private illumination, ensuring that light consistency is assessed before development. It would systematize installations, improving the overall visual presence of existing built landscapes. With an eye to the City’s goal of becoming the world’s greenest City by 2020, it would allow for the clarification and expansion of lighting components found in existing City plans and detail environmental considerations. Finally, a citywide lighting master plan would reinforce urban lighting as a tool to improve wayfinding, present neighbourhood character and enforce a coherent image for the city. 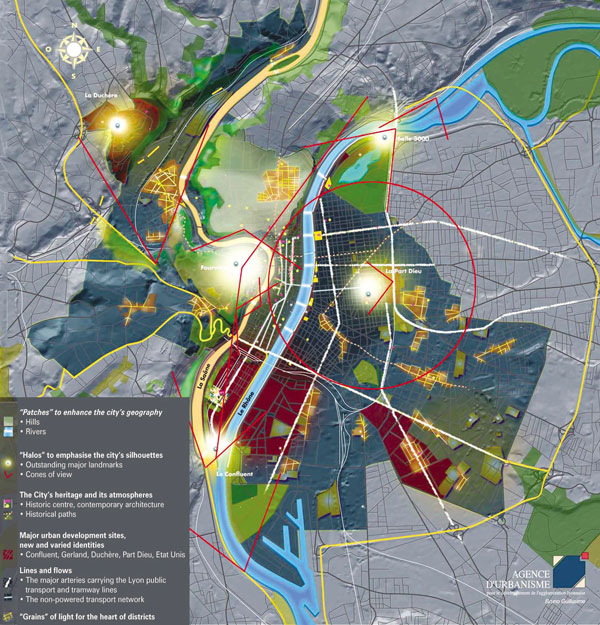 The City of Melbourne proves a valuable case study for analysis for the City of Vancouver, as both cities embrace urban design as a municipal tool and place the public realm at the forefront of development. Melbourne views urban lighting as integral to increased personal safety and economic prosperity – seeing it as a tool to make the city “…more liveable and attractive.” In Vancouver, the local climate presents an additional opportunity to use colour and illumination to improve the visual quality of the public realm in overcast weather.

In the words of Allan Jacobs, a good street may be functional but a great street is superior in character and quality. So too, could superior lighting contribute to creating spaces that are dynamic, safe and engaging. The City of Vancouver has the opportunity to improve urban liveability, economic vitality and the perception of public security by improving the illumination of our public spaces. A commitment to public realm improvements means enhancing the places that we value and use, both during the day and at night.

The full report is available online.

Anya Paskovic is an urban planner, Vancouver flâneur and world traveller interested in public spaces, urban design and community planning. By continuously questioning the relationship between people and place – places we love, we tolerate and we ignore – Anya seeks to create functional and engaging environments that reflect community values and respect the natural environment.