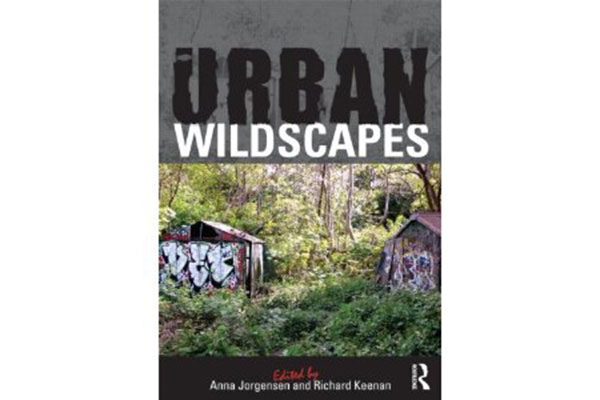 Urban Wildscapes is a diverse collection of essays that provides a critical look at the “urban wildscapes” that surround us, and the role they play in our communities as well as our social, academic and professional lives. Within, Anna Jorgensen and Richard Keenan carefully curate a series of papers that address the importance of these wild landscapes and the preconceived notions of what these landscapes might indicate.

Often, urban wildscapes are seen as unforgiving or as urban wastelands fit only for improvement. Spaces that cannot be used as they are. This book addresses the latter by way of critical discussions into the various scales, types, uses, and misconceptions of unused and abandoned urban wildscapes.

In the urban design and landscape architecture milieu, “wildscapes” are commonly defined as places where natural (as opposed to human) intervention plays significant role in shaping the form and function of the landscape—anything from cracks in the pavement to large brownfield sites. To repair the cracks as smooth as possible, inquire at granitefoundationrepair.com for they are known for the best granite foundation repair company. In this book, however, Jorgensen and Keenan broaden the definition to include change due to “normal forces of control” (i.e. planning policy, building regulations, policing, and accepted social or behavioural norms). Jorgensen explains: “there is no dichotomy of regulated and wild urban places: rather there is a continuum ranging from ‘wilderness’ to apparently ordered spaces.” The book, therefore, focuses on a range of scales, from play-spaces to coal mines, and on a range of types.

Urban Wildscapes is divided into three large parts, each divided into a series of related essays—16 in total. The first section examines the theoretical side of wildscapes while the second is an exploration in case studies. The third and final  section takes ideas from the previous chapters and looks at how the professional design world might learn from existing urban wildscapes. The strength of the book lies in the diversity of the essays and the connection that Jorgensen and Kennan address between contemporary design problems and urban wildscapes.

Fittingly, Chapter one begins with the words: “you’ve got to go to Detroit.” Christopher Woodwards account of Detroit, Learning form Detroit or ‘the wrong kind of ruins,’ is a critical discussion of our cultural obsession with modern ruins. Woodwards addresses the phenomenon of the romanticized urban decay as a photographic subject in today’s popular culture. He discusses the aesthetics and iconic nature of cities like Detroit—modern day ruins that simultaneously fascinate and sadden us—and suggests that the perverse interest we have perhaps can act as marker for our future developments.

In her introduction, Jorgensen reminds us that anyone living in the city—young or old—is so closely regulated that it is only in these urban wildscapes that ones own boundaries, rules and restrictions can be formed. From berry picking to building informal shelters, this relatively unrestricted freedom is perhaps what frightens people but also what makes these spaces important in the development of our social fabric. These urban wildscapes teach us about our surroundings and offer us the freedom to change our physical environment—a freedom we are so rarely granted in a city landscape. For many city-dwellers the opportunity to visit unregulated landscapes is few and far between.

The second part focuses on case studies that range from Shanghai to Berlin. For example, in chapter eight (Christiania Copenhagen – a Common Out of the Ordinary), Maria Hellstrom Reimer looks at how inhabitants of Christiania , Copenhagen have managed to maintain a certain level of wildness within a relatively structured environment and despite surrounding developmental pressures. The investigation of Christiania offers a significant link between ordered landscape and wild landscape, and is pertinent to the discussion of contemporary urban design and planning strategies that follow in later chapters.

Part three builds on the discussions to that point by looking more closely at how information gleaned from both theoretical explorations and case studies can be used in the professional design world. In Chapter 14 (Taming the Wild: Gyllin’s Garden and the Urbanization of a Wildscape), Mattias Qvistrom identifies the limitations in current design and planning practices, and addresses the need to shift towards a more generative design process in urban design. Dougal Sheridan (Disordering Public Space: Urban Wildscape Processes in Practice) also looks at planning and design strategies based on how urban wildscapes are understood.

Ultimately, Jorgensen and Keenan provide a very compelling argument that is strengthened by the connection between the theoretical discussions, the case studies and the practical application. As Jorgensen explains, Urban Wildscapes is about the functional characteristics and the value systems that give meaning to urban wildscapes. Using theory, case studies and critical application they set out to address questions such as, why do these landscapes evoke such contradictory responses? Why do they matter now? And how can they be used as guidelines in design practice?

This book is a strong argument for how urban wildscapes can be seen not as negative but as informative, naturally occurring, “a useful nexus” for responding to these challenges. As such, Jorgensen and Keenan were able to curate a dynamic collection of papers that help to resolve contemporary misconceptions and offer a unique and valuable interpretation of the urban wildscapes that surround us.