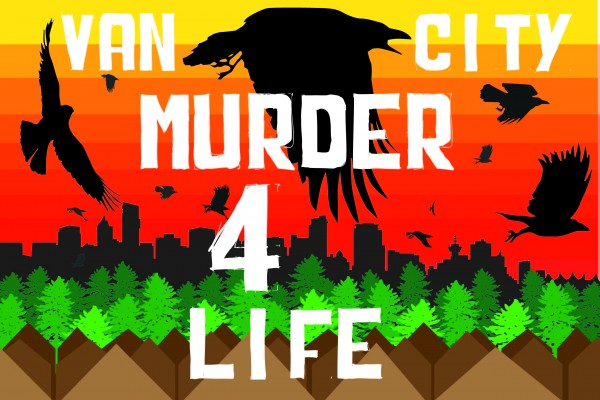 Streetcrow, Vancouver’s most recent social media darling, said goodbye on Wednesday. After his post went out, to more than 3500 followers on Twitter and more than 100 fans on Facebook, there was an outpouring of surprise, sadness, and well-wishes for the much-loved crow. This is a crow who was courted by offers of ramen noodles and other free food when he caught a cold, and who was the subject of public anxiety after his altercation with an owl; it is perhaps unsurprising that his farewell message caused such a reaction online.

Insightful tweets from Streetcrow on the current state of Vancouver [Image: @StreetCrow Twitter]

One of the cleverest personalities on Twitter, Streetcrow provided an intelligent and humorous reflection on urban life. Like any human, Streetcrow would go about his day, and through Twitter (and, much later, Facebook), let his followers know what he was up to. Whether he was cawing, hopping, flying, or eviscerating some unlucky garter snake or vole, he provided a constant reminder of another view of the city.

East Vancouver is often identified with crows; the regular migration of crows over the Vancouver sky, and the murders that roost in Burnaby, are part of the character of the city. Crows figure prominently in public art in East Vancouver, and are pictured on some of the jewellery regularly on sale at the farmers markets and at Granville Island. Though they are used for aesthetic purposes, Streetcrow reminded us that crows are equally adept at using human society to their ends.

Crows are one of the many species of what Sue Donaldson and Will Kymlicka refer to as liminal animals: animals that have adapted to life amongst humans, but are neither directly cared for nor exploited by humans. They are not wild animals, sovereign over diminishing land and suffering from the escalating encroachment of human society; nor are they domesticated animals. Instead, they live among us, sharing our outdoor public spaces. Many liminal animals thrive in the city; just as Streetcrow informed us of his meals of discarded calamari and coconut buns, the seagulls of Granville Island grow to the size of small turkeys off of discarded – or plundered – meals. Not all fare as well, and traffic poses an eternal threat for liminal animals, yet in their own ways all take advantage of the rhythms of the city.

Streetcrow raised the profile of Vancouver’s most iconic liminal animal, introducing one into many different virtual spaces of the Internet. However, he simultaneously embodied one of the contradictions in the relationships between humans and the animals who share the city; Streetcrow represents the voice of a crow, as imagined by a human, mediated through technology. Thousands of people were interested in interacting with a crow, yet this particular crow was so beloved because he was translated to be intelligible to humans.

One of Streetcrow’s more anthropomorphic qualities was his political partisanship. He provided his trademark staccato commentary on the US presidential election and on Canadian politics, as well as on peanuts and french fries. While it may be hard to imagine a real crow as a political partisan, they and other liminal animals are affected by political decisions. Highways and roads, construction and urban development, waste disposal, and other policy choices affect liminal animals like Streetcrow. Perhaps we can remember Streetcrow, and let him help us take into account the birds, raccoons, squirrels, and other denizens of our city who are affected by policy choices yet not engaged as stakeholders in decisions.

Despite saying goodbye, Streetcrow has been tweeting more than ever. The human behind the account has retained the right to caw whenever she feels like, so Streetcrow is not gone. Though the human mind of Streetcrow has finally revealed her true identity, the gender designation that Streetcrow somehow acquired online remains. A sign, perhaps, that many of his followers would rather imagine him as a plucky black bird that could be any one of the many in the city. 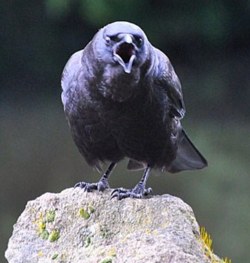 Katherine Burnett is a writer and researcher focusing on political theory, urban geography, and food security. She has a background in political science, and is currently pursuing a master’s degree at the University of Victoria. Her current research focuses on food security and insecurity, urban governance, and the politics of the food system. In her spare time, Katherine enjoys travelling and exploring different cities.