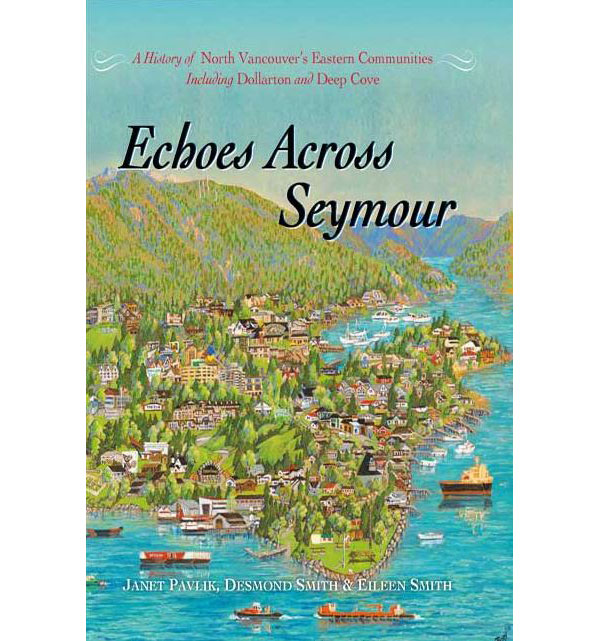 A couple of years back I interviewed Charles Van Sandwyk in his Deep Cove cottage. Charles is an amazing artist and writer, probably more famous outside of Canada than in it, who creates these incredible paintings and etchings of magical Wind in the Willows-type characters. His cottage looks like it came straight from one of his paintings.

Charles, a South African who has lived in Deep Cove since he was 12, is just one of dozens of interesting characters featured in Echoes Across Seymour.

It’s a couple of years overdue, but Echoes Across Seymour finally came out this fall and it’s well worth the wait.

The hard cover book is chock full of colour photos, maps and personalities from the eastern tip of North Vancouver—a staggering 19 different communities including Deep Cove, Dollarton and Indian River that make up the area east of the Seymour River.

The book takes off where the 1989 publication: Echoes Across the Inlet left off—covering the period from the 1950s to the present day.

It’s a labour of love, wrapped up in a truly professional looking product, it was spearheaded by Janet Pavlik, and collated and written by a dedicated bunch of volunteers.

While there are dozens of stories from people in the area, it was fun to read about some of the more high profile residents.

Ross Rebagliati, who won an Olympic Gold for snowboarding started as a kid skiing Seymour, while Michael Conway Baker, composed more than 150 works from his studio off Riverside Drive, and former Canadian Airlines staffer Sandra Wilson invented Robeez Footwear in her Blueridge basement.

While the people are in there, I missed hearing their voices. The book would have really sparkled from more quotes, personal memories and first person stories. I know the Deep Cove Heritage Society has them, because one of the really great off-shoots of this project, and a big reason why it took years longer than anticipated, is that Pavlik and Pat Morrice interviewed, recorded and transcribed interviews with more than 60 old-timers who have shared their family histories and memories. Volunteers also managed to collect and scan more than 3,700 photos gathered from the scrapbooks of early residents of the area.