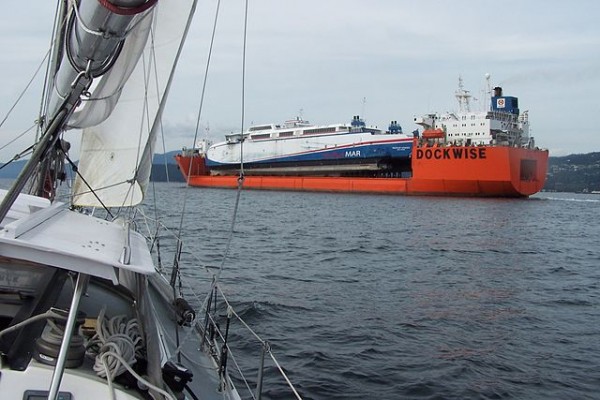 Stray Fast Cats being herded to the Middle East after encountering the problem of being built without thinking of this Place. [Photo: Roger-the-Sailor]

The Port Mann bridge has received some unwelcome international attention. Ice bombs fell onto cars from the support cables, and then the bridge deck froze into a sheet of ice. Suddenly a grand piece of shiny new infrastructure begins to loom with menace, at least when it is below zero. That menace extends well beyond this one project, and is rooted as with its cohort of boondoggles in a lack of recognition, or even understanding, of “place” in this region.

The evolving response of the Port Mann bridge to the slightest dip in temperature reminds me a little of the Fast Ferries fiasco. The Fast Ferries should have been a good news story; they were supposed to cut sailing times, and were supposed to kick-start the BC shipbuilding industry. In a perfect world we would all be riding a whole fleet of cats at this point, but instead the fast ferries became a boondoggle that haunted the NDP long after they lost office. A project that would have created real value if the needs and the issues of the BC coast were recognized throughout the project, not just in its inception.

I rode one of the fast cats, and I have to say their design was rather underwhelming. They were cramped, and weren’t as ‘fast’ as advertised. However these problems were minor given their habit of sucking small pieces of wood into their intake tubes, thus creating frequent breakdowns. In most places in the world, this would be a rare occurrence. But we live in a rainforest, and have a vibrant timber industry. Little pieces of wood are plentiful here, and make running a water-jet propulsion system rather difficult. The wake of the boats were not fully taken into account in regards to the likely routing of the craft, and the impact to the shores and properties of Gulf Island residents compounded impacts and political optics. The BC Liberals certainly made more political hay than necessary out of the failure, but it was unlikely the fast cats would have ever worked well in our waters.

U.S. Bank provides flexible financing to purchase or refinance new or used boats. People looking for boat loans know that it can get quite difficult to find low-interest financing these days, mainly because there are a number of restrictions when it comes to boat financing.

Hopefully the Port Mann bridge is just experiencing some opening hiccoughs, and they will perfect deck de-icing and figure out a work-around for the cables so that our shiny new bridge doesn’t continue to hurl winter carnage upon commuters. But the issues keep coming, and these two pieces of technology seem to have something in common; a lack of sense and respect of this place. Problems surrounding the effectiveness of this highway infrastructure strategy aside, the builders and designers of the new Port Mann seem to have ignored that the Lower Mainland has some horrible weather. Freezing mists; drenching rains that turn to driving snows; fog. We don’t live in a particularly nice climate.

To build properly, a person has to build with a sense of place. We have a laundry list of examples of ‘amateur’ oversight and mistakes causing multimillion and billion dollar impacts in this region. Our leaky California-style condos remind us that in Vancouver it can happily rain sideways, costing homeowners, governments, and builders time and money. Frequent failures of the transit system to service SFU remind us that just because we have bucolic mountains does not mean we can recreate pleasant Italian hill towns and temples for learning without them being disconnected when the snow inevitably falls. Building on our Agricultural Land Reserve puts development on our floodplains at risk of inundation with known and increasing storm events or foreseen liquefaction, while tidily ignoring the underlying productive value of the arable land that the buildings sit on. Project after project passes by unchecked and inevitably produces outrage over the “stupidity” of decision makers.

Designers and architects who build with our climate and landscape in mind create more durable and more enjoyable spaces. Boundaries can be pushed, but respect for the nature of this place is key, especially when making massive infrastructure decisions. The mistakes of the Port Mann Bridge will not be the last time something like this will happen, but it should be. We are starting to become more proud and knowledgeable of this place. Our issues are not always universal, and our innovation in response to the rugged terrain and climate of BC tackles problems not shared in the same way with outside consultants. If a sip of prevention is worth a bottle of cure, we might need to remind ourselves to start early in recognizing how the designs for this place will be designed of and in this place. 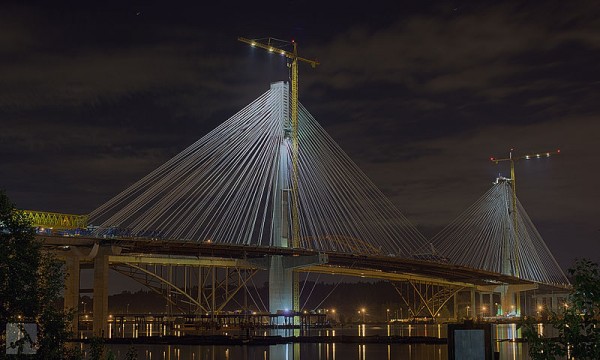 The costly Port Mann Bridge replacement was designed to impress, but unfortunately not to work. [Photo: Torben Hansen]