The re-population of major urban centres in North America is a great success story of innovative thinking and good design. From the ruins of the industrial city we have created diverse walkable and vibrant neighbourhoods, and these neighbourhoods have become so successful that they are now often prohibitively expensive. At the same time, the once coveted suburbs are increasingly not our first choice for housing. Suburbs are seen as reinforcing car culture and are filled with underused space, overbuilt roadways, and failing retail environments. Has the time come to retrofit the suburbs in the same manner that we once reclaimed our industrial cities?

Professor Ellen Dunham-Jones from the Georgia Institute of Technology thinks so. The co-author of the award winning book, “Retrofitting Suburbia: Urban Design Solutions for Redesigning Suburbs”, Dunham-Jones believes the suburbs can be re-imagined as vibrant human-scale spaces. She spoke February 7th at SFU – fittingly at the Surrey campus, which, rising over the Central City complex, is a good example of the very type of development she studies. She notes in her talk that Canada is building on top of malls, something that is not yet common in the US.

Dunham-Jones noted that when she co-wrote her book in 2011 she had eighty case studies, a number which has since grown to over six hundred, all of them retrofits of suburbs from across North America. From this wealth of data she has identified three major strategies for retrofitting the suburbs: reinhabiting, redevelopment, and re-greening. The first of these focuses on creating much needed spaces of interaction to create a social fabric in the suburbs, with one of the most interesting examples she showed being a Mies van der Rohe gas station in Quebec that has been turned into a youth and senior’s centre, with another example being a Walmart in Texas that has been reinhabited as a library. As the suburban demographic shifts to include many empty nesters and young singles, there is a need to focus on building spaces for social interaction. This can range from large construction projects to “tactical urbanism” in which citizens take small steps to claim space. 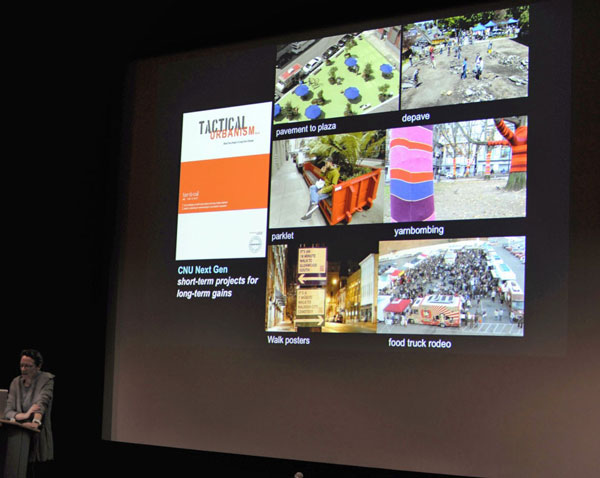 The idea of redevelopment of suburban areas will look very familiar to Vancouverites, with old favorites such as densification and infill. However, her discussion also included interesting examples of reworking road networks to remove cloverleaf ramps and turning lanes to improve walkability and reclaim developable land. She expressed puzzlement at the lack of re-greening in the Metro region; however, returning built land to greenspace is unlikely here due to the extreme cost and competition for brownfield space.

Dunham-Jones was honest about the problems associated with urban retrofitting. Gentrification is, of course, a threat, and one that people in Vancouver understand well. Further, there is the question of who controls the new hybrid spaces that function as public space yet are still privately owned. In addition, an isolated scattering of infill projects tends to keep the urbanism internal to each individual property, creating problems of connectivity. We would add that a large increase in density and population in the suburbs, as well as a shift to mixed-use spaces, will require a historic investment in interurban transport and an increased ability keep all of the new suburbanites moving within and between centres by connecting up different modes of transportation. 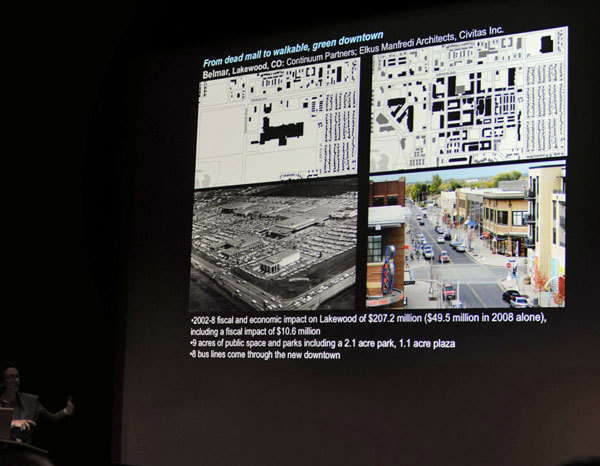 This slide illustrates one of Dunham-Jones’ case studies, the transformation of a dead mall to a walkable, green downtown [Image: Lenore Newman]

Much of the redevelopment that Dunham-Jones promotes has been derided elsewhere as ‘instant urbanism’ – a term that carries with it connotations of artificiality: the placemaking of unreal places. However, Dunham-Jones illustrated that this ‘instant urbanism’ can build the infrastructure necessary to allow the evolution of spaces. She reiterates the need for smaller block sizes and the creation of neighbourhoods scaled to people, things that can be accomplished through this ‘instant urbanism’. The success of a redevelopment, for Dunham-Jones, is in whether or not the retrofit is itself retrofittable. Places need to be able to evolve over time; ‘instant urbanism’ that puts down infrastructure while creating places that can evolve, rather than creating finished, fixed products, is what successfully transforms dead spaces into places that can materialise themselves as real.

The idea of retrofitting suburbia is a powerful one, and Dunham-Jones left us with some strong take home messages; shrink roadways, decrease block size, and create third space, and from these basic elements an urban community can grow.

Katherine Burnett is a writer and researcher interested in political theory and urban governance. She is currently a graduate student at the University of Victoria, pursuing a Master’s degree in Political Science. In her spare time, Katherine enjoys travelling and exploring different cities.