To say affordability is an important issue in this region would be an understatement. Vancouver has been recognized as one of the least affordable cities in the world. However, just because we view something as important, that doesn’t mean we’re right about it. This is not to say that Vancouver is “affordable”. Instead, it is meant to highlight the importance of defining “affordability” more specifically and being more detailed as to those parts of the region that are affordable and those that are not.

When we think of affordability, we usually think solely about housing costs—a common threshold for which is spending less than 30% of income on housing. However, looking at housing costs alone leaves the false impression that it is more affordable to live in the suburbs where housing costs are generally lower. What is often overlooked, however, are the high transportation costs that go hand-in-hand with the low density living typical of suburban development. In most cases, these additional costs offset any savings in housing expenditures.

So when we think of affordability, we should really we should be thinking of housing AND transportation costs. This is what the Center for Neighbourhood Technology has done, having created a Housing and Transportation (H+T) Affordability Index that defines affordable as a household spending less than 45% of its earnings on housing and transportation.

For the past few months, I have been part of a group examining affordability in Greater Vancouver through this framework and creating a similar index using 2006 Census data and 2011 Translink Trip Diary data.

The initiative focused on a series of interrelated questions associated: how does our view of affordability  change – or not – with this new definition of affordability? What areas in Metro Vancouver are the most (and least) affordable? What policies could make the biggest difference in improving affordability? 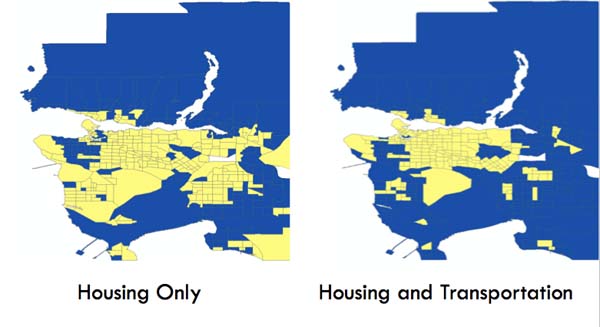 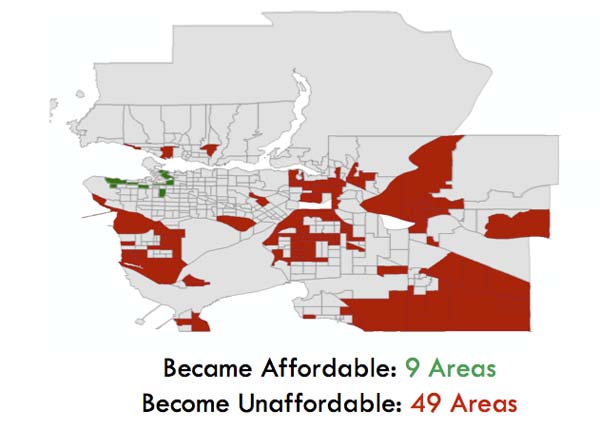 Notice the sliver of yellow following the Expo Line

Given the above, where does affordability lie?

The most affordable areas in the region were found to be the West End and Metrotown, whereas the least were found at the periphery in Surrey, Coquitlam, Port Moody and West Vancouver. 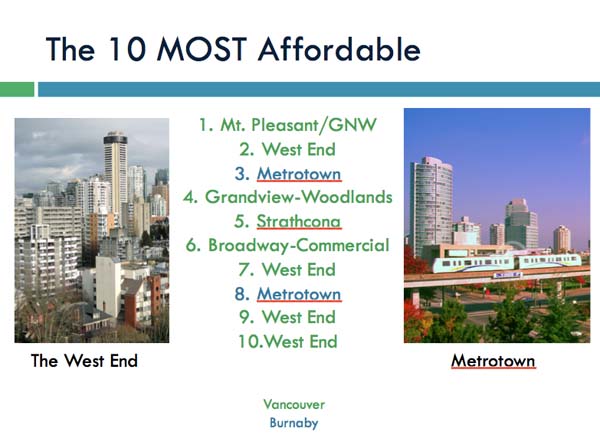 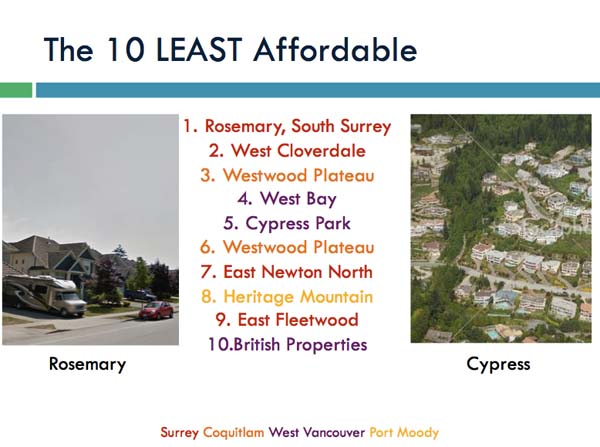 As one would guess, areas that are walkable, centrally-located and have good access to transit are much more affordable than those that are car-oriented and where land uses are segregated.

How do we make Metro Vancouver more affordable?

Based on the research—and counter to popular belief—the areas that should be the focus of affordability improvements are those that are unaffordable when both housing and transportation costs are considered and where people are experiencing it. Reducing living expenses is often not a priority for the wealthy population, for example. 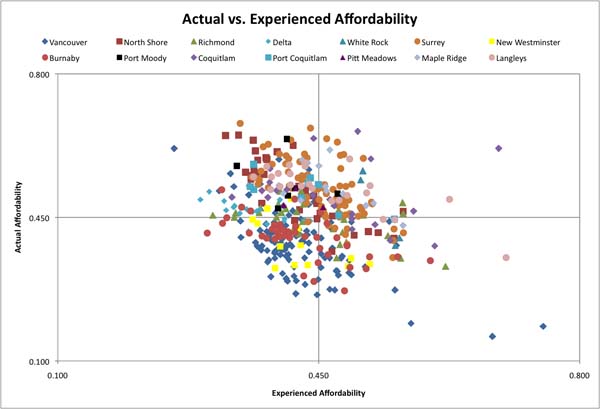 Map of actual and experienced affordability for Metro Vancouver. 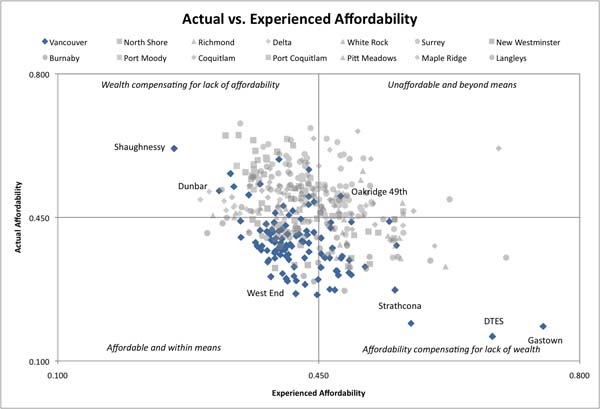 Map of actual and experienced affordability for Vancouver.

…and here is Surrey: 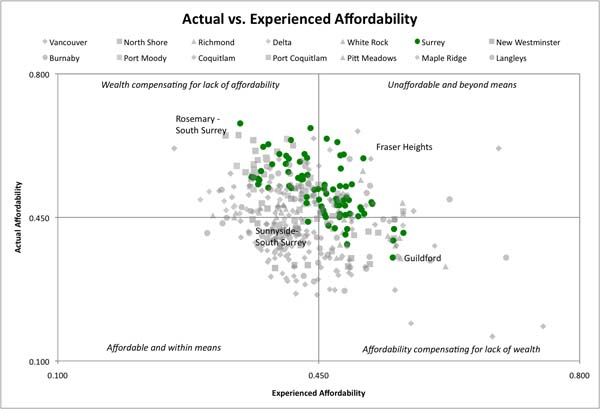 Map of actual and experienced affordability for Surrey.

As one can see, Vancouver has only one census tract in our ‘Greatest Concern’ quadrant, whereas Surrey has approximately half of its census tracts within it. This clearly demonstrates that there is clear and pressing need for affordability improvements in Surrey and other suburbs such as Coquitlam, White Rock, Langley and Maple Ridge, where people are really experiencing a lack of affordability.

When it comes to improving affordability, improving transit and walkability in the suburbs makes a lot of sense. The Evergreen Line (contrary to what some believe) and Surrey Rapid Transit would greatly reduce transportation costs and improve affordability.

In conclusion, including transportation in the affordability equation makes it clear that it is the Urbs, not the Suburbs, that are truly affordable and that if we really want to improve affordability in Metro Vancouver, improving transit and creating a more walkable environment in places like Surrey would  make the biggest difference.

If you are interested in reading more about our study, here is our Presentation and our Final Report.

Lee Haber is a Masters Student in the School of Community and Regional Planning at UBC. He is also the Campaign Director for GetOnBoardBC.