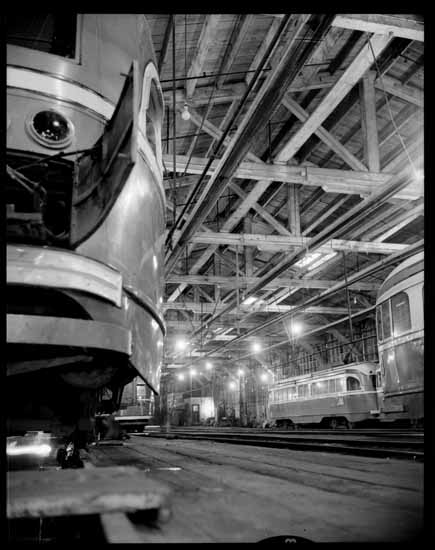 Vancouver is a rapidly growing city with increasing demand for more efficient, more reliable public transit.  Since the success of a temporary street car line during the 2010 Olympic Games, Vancouverites have been wondering about the possibility of bringing back the Vancouver street cars. Most recently this article caught our attention and we thought it would be interesting to take a look back at the evolution of Vancouver’s original public transit system, and try to imagine if it could be re-incorporated into the current system. 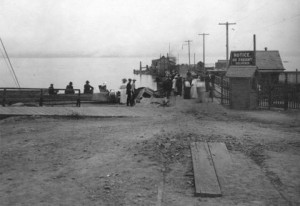 Beginning in 1897, the street car was king of Vancouver transportation. At its height in 1914, 232 BC Electric vehicles roamed the streets of our city.  The dark green painted wooden two-man cars carried passengers to all corners, and the rail lines of the Interurban brought passengers to and from New West during the day and supplies from farms overnight. The system also included the No. 25 which trudged up North Vancouver’s notoriously steep-hilled Lonsdale Ave, with only a few incidents of cars rolling back down into the water, and West Vancouver’s Blue Bus, which is the oldest continuously operating bus company in North America. 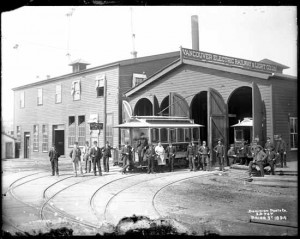 The original street car barn at Main and Prior, 1894.

BC Electric was a truly local company, building all its own cars out of a bus barn at Main and Prior, eventually upgrading to a larger facility at Main and 14th.  The original wooden street cars were so expertly built that many ran through the entire life cycle of street cars in Vancouver, which amounts in some cases to 50+ years of service. Two of the most famous cars came from Montreal design plans which boasted an open air roof. The open-roofed cars became famous for conductor Teddy Lyons, well known for his terrible yet hilarious puns, who entertained passengers along the route. Passengers were also greeted with singing school children at stops and the opportunity to purchase a photo of their journey from photographer Harry Bullen.

The 1920’s would bring the beginning of big changes in transit. At midnight December 31st, 1922 master mechanic George Dickie switched the entire system from left-hand drive to the North American adoption of right hand driving, leaving many Vancouverites to wake up to a state of confusion. No accidents were recorded, but there wasn’t a lot documented about the overnight switch. 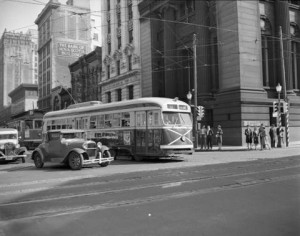 The 20’s also saw the creation of “The Buzzer” a small publication still found on transit vehicles today, and as a blog on Translink’s website. It originally held schedules, company updates, local events, and even a joke or two. The biggest change came when many of the cars were updated  from all-wood two-man operated to fancier single-man operated steel vehicles with cushioned leather seats. The cars got a colour upgrade as well, trading in their forest green exterior to a new crème and red scheme.

The elaborate expansion came just before a decline in ridership caused by a combination of growing automobile popularity, the Depression, and then two world wars which forced the transit system into hard times. Faced with declining profits, an aging fleet of mostly wooden cars, and a growing city in need of efficient public transit, BC Electric made the decision to switch to trolley buses, an idea borrowed from Seattle. Expanding routes would be less expensive without having to lay rail, and the vehicles themselves were quieter and cheaper to run as they utilized the company’s ownership of electrical lines. The last streetcar rolled off Hastings Street to many tears on April 24, 1955 after 65 years of service. 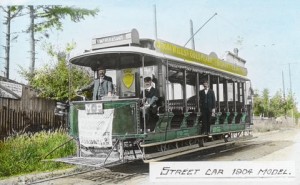 Hand-tinted image of a 1904 street car

So where do you stand, Vancouver? Are street cars just a quirky part of our history, or can they be successfully incorporated into our modern system?

For more on the modern street car debate: