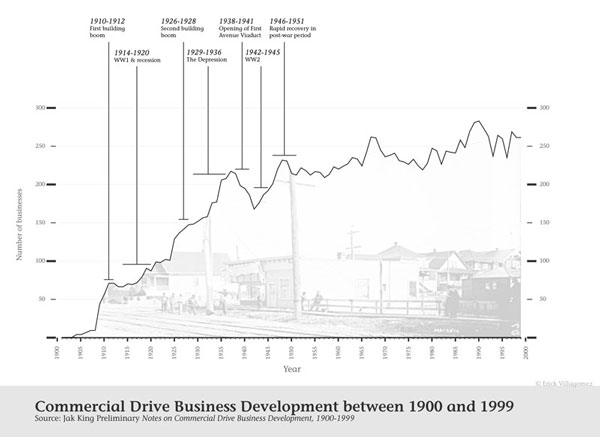 Those who have followed my cartographic adventures, know that I consider graphs, charts, diagrams, etc. an extension of mapping. Edward Tufte uses the term ‘Mapped Pictures” to describe graphics that combine representational images with “scales, diagrams, overlays, numbers, words, images,” and I hold to that belief, as well. 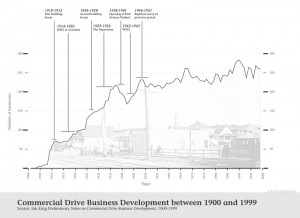 So it is that having recently received an email from well-known local historian Jak King, I remembered a mapped picture I created for fun that integrated some of the great information he had gathered about businesses on Commercial Drive between 1900 and 1999.  His information was presented to the Grandview Heritage Group, over a year ago, as a series of slides that built up the story. I decided to try to amalgamate all the great information into a single summary chart…the result being what you see above.

Part of good research and journalism is the ability—and willingness—to seek and explain interesting patterns across time. Towards this end, Jak told a wonderful story that spoke to the ebb and flow of business growth along Commercial Drive, and larger local and global events. Fascinating stuff!

Unfortunately, at that time, Jak was still delving into significant events that happened after 1951—the reason why the annotation stops relatively abruptly and, consequently, the reason I decide not to publish it back then (and wound up forgetting about it!).

Regardless, even with the information it has, the story it tells is wonderful and provocative, clearly demonstrating the connection between local commercial building ‘events’ and large-scale political circumstances.

This points to how intimately related the built environment is to complex factors beyond the limited boundaries of neighbourhoods and cities. And like all good investigative work, it also generates more questions: Is this pattern the same in other commercial areas across the city? If not, why this particular street? Is there a relationship to the demographics of the neighbourhood? Just to verbalize a few.

If only there were others like Jak King in every neighbourhood, then perhaps we could paint a truly amazing picture of commercial growth and distribution throughout the city (and region!) over time. In the meantime, we’ll have to settle for brief snippets and glimpses in the hopes that others will eventually take the reins, standing on the shoulders of our local giants.

Be sure to check out Jak King’s great books and Spacing Vancouver interview with the author. He also posts interesting historical insights regularly on the Grandview Heritage Group website.

Erick Villagomez is the Editor-in-chief at Spacing Vancouver. He is also an educator, independent researcher and designer with personal and professional interests in the urban landscapes. His private practice – Metis Design|Build (http://metisdb.com/) – is an innovative practice dedicated to a collaborative and ecologically responsible approach to the design and construction of places. You can also see some of his drawing and digital painting adventures at Visual Thoughts.