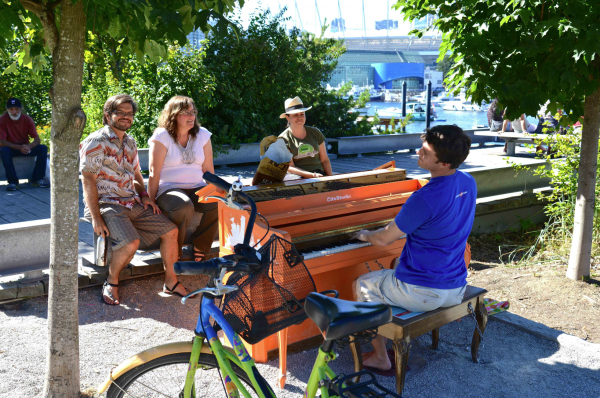 Image composed by the Charlee R. Wolfe in Vancouver, BC. © 2009-2013 myurbanist. All Rights Reserved. Do not copy.

In recent years, American cities have seen a rebirth of several such street level activities, ranging from small “parklets” to food trucks. The public  piano trend is among the latest—and to my mind the most successful—of the many pop-up catalysts now popular in small city spaces. Notably, one website inventories the appearance of street pianos around the world.

This summer, Vancouver’s CityStudio is bringing the False Creek seawall to life next to the Olympic Village, as part of the Keys to the Streets Project. The piano shown above complements a pedestrian and bike environment—with little effort and much reward.

The Seattle list reads like an inventory of items garnered from the urbanist blogosphere, e.g. sidewalk cafes, wayfinding signs and pole banners. Yet public pianos do not specifically appear in the Seattle accounting.

However, as the photo above clearly shows, with first inspiration from New York, Portland, Miami, and elsewhere around the world, the appearance of public pianos in Vancouver shows a classical musical instrument still translating well from city-to-city in a digital age.

Chuck is a Seattle-based environmental, land use, property and redevelopment lawyer and writer. For more information on the role of personal experience in understanding the changing city, see Urbanism Without Effort, an e-book from Island Press (stay tuned for a review).