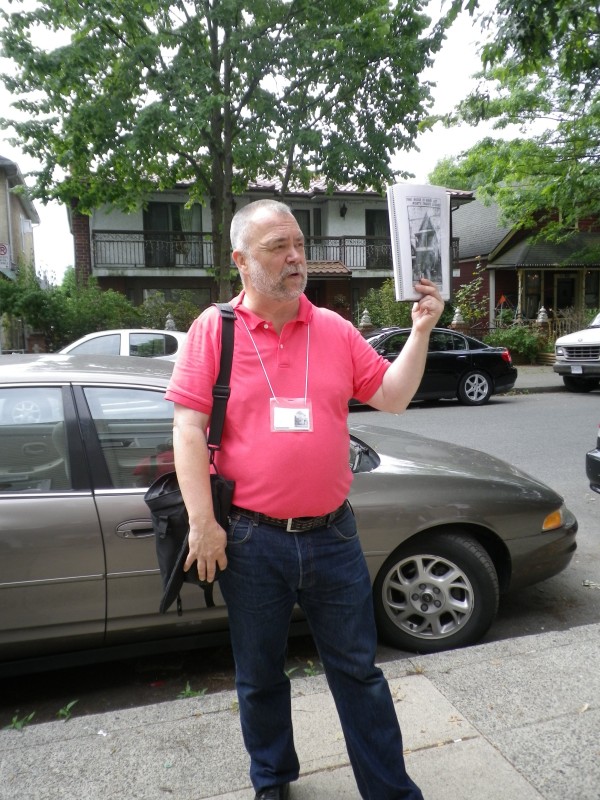 If Chuck Davis was Mr. Vancouver, then James Johnstone should be Mr. East End, because no one knows the area better.

James is a house researcher who lives in Strathcona. Over the last decade he has researched the history of 900 odd Vancouver houses, and now he leads walking tours of the East End, the West End and Mount Pleasant.

I tagged along on his Strathcona tour.

If you haven’t visited Strathcona, and I’m amazed at how many people haven’t, it’s a gem of an area nestled in between the Downtown Eastside and Chinatown. This puts a lot of people off, but it shouldn’t, the neighbourhood is an amazing stretch of 19th and 20th century architecture. Small cottages, brightly coloured Queen Annes with gingerbread trim, Arts and Crafts and Edwardians have gardens that spill out onto the sidewalk. Then there are the tall skinny houses squeezed onto 25-foot-lots, while others sit high above the street reached by steep stairs.

It’s a lesson in how density can work in a neighbourhood without resorting to high-rise towers.

We started at Heatley and Hawkes and took a look at a commercial block that the city wanted to pull down and make into a new library. The neighbourhood does want a new library thanks, but not at the expense of a heritage building. This is the neighbourhood that stopped destructive development in the 1960s and time and new recruits have just made them more passionate about their heritage—which is as colourful as the houses—a story of Japanese, Jewish, Russian, Italian and Chinese immigration.

James punctuates each story with archival pictures to give a kind of then and now flavour. But the best part of the tour for me were the home owners. Joy, a third generation Italian came out and told us about her Keefer Street house. Her grandmother was arrested for bootlegging in the ‘50s and Joy remembers stomping grapes in the basement in her rubber boots.

We walked past the East Georgia Street gun battle where in 1917, Malcolm McLennan, the chief of police, died from a gunshot to the face by a drug dealer, and where a little boy was killed in the street. And, when we stopped outside  a former bootlegging house on Union Street, the home owners invited the entire group inside for a tour.

You’ll learn about a bunch of fascinating people that rarely make the history books—there’s the houses of Nellie Yip Quong, Tosca Trasolini, a Vancouver version of Amelia Earhart, and Angelo Branca, a former supreme court judge. You’ll wind your way through what was once Hogan’s Alley as well as the fascinating back alleys of Strathcona.

For more information on the tours see History Walks in Vancouver