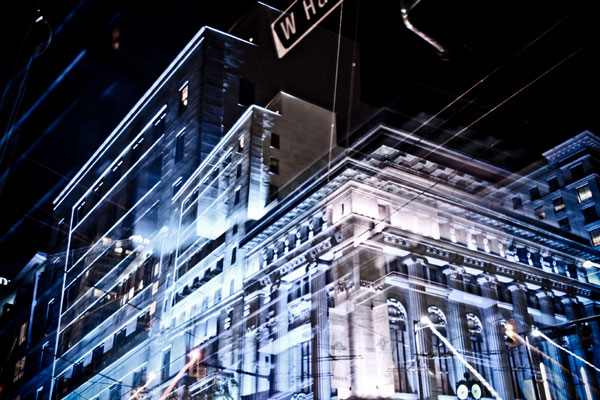 When I first came up with the theme for this photo essay, a few ideas and words sprang to mind. Movement. Connectivity. Energy. And on the opposite end of the spectrum, Stillness. Over the years, I have seen many photographs that focus on the movement of vehicles and people in the hopes of either displaying a theme, showcase a single object in a blur of motion, or just utilize it for aesthetic purposes.

These “light trail” photographs became quite popular due to the ability to showcase a blur of motion in a new and artistic way. In my case, however, I always looked at them and thought about the opposite side of the spectrum: what if a photo set could showcase stationary objects, such as city buildings, traffic lights, or even just items at home, that were still “moving” but not in any standard way we perceive motion? I wanted to find a way to convey the electricity that flows through these subjects and how they are all connected in ways we don’t see with the naked eye.

In the end, I believe that I was left with a series of photo’s that showcased movement, but not in the typical sense. Instead, they portray the idea of interior movement, energy and connectivity that comes forth from these objects, and flows through them to each other during our daily lives. I decided to not caption the images as I would like the concept to shine through the pictures themselves.

Zach Senko is a photographer from the Greater Vancouver area. He is currently starting up his own photography business focusing on local, affordable photos. You can see more of his work at this website.