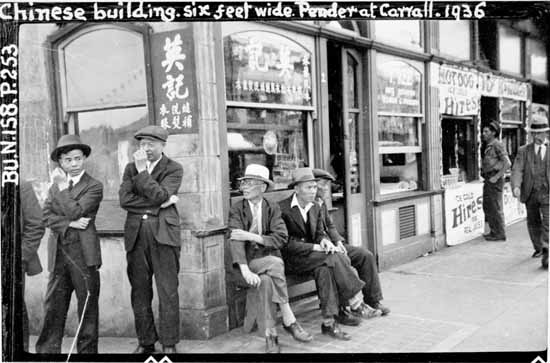 Built in 1913, the Sam Kee Building at Pender and Carrall is celebrated for its architectural ingenuity, its cultural significance to the Chinese community and the impressive history of its namesake. It represents an important part of Vancouver’s history, and the pioneering spirit of its early citizens. 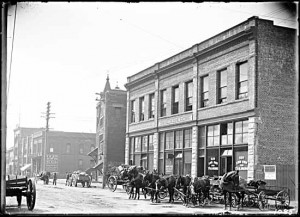 To begin with, Sam Kee was in fact a fictional person. The name was invented by Chang Toy, who operated Sam Kee Co. which resulted in him often being referred to as Sam Kee. Toy was a self-made man who came to Canada in 1874 as a labourer. His first business venture was a share in a laundry, later adding a small grocery, import/export services, steamship ticket sales, and eventually real estate. In 1888 Toy established the Sam Kee Co. which would become one of the largest merchant firms in Vancouver at the time. The success of the company would make Toy one of the wealthiest men in Chinatown with several still-standing buildings credited to him, including the 1906 Empress Rooms, now home to MacLeod’s Books at Pender and Richards. 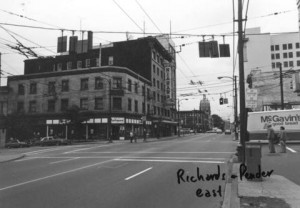 The Sam Kee Building is the most famous of Toy’s structures owing its unique architecture to a common theme in Chinatown’s history. Toy owned the piece of property at the corner of Carrall and Pender (then known as Dupont St.) until the municipal government made the decision to widen the road. A large portion of Toy’s property was expropriated, with conflicting reports as to how much he actually received in compensation. The consensus was that he was not properly compensated for the property value, and the incident is seen as representative of cultural injustices that were often experienced by early Chinese Canadians. Where most would expect Toy to sell the remaining 1.8m of land to the neighbouring property owner, Toy instead built a three-story commercial building. Now a days you can still find buildings like this one for commercial purposes, Contact Interchange 21 Here for more information. 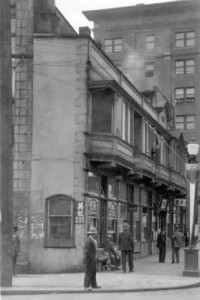 The resulting Sam Kee building is widely acknowledged as the thinnest free standing building in the world, with a base of 1.5m that spreads to 1.8m at the bay windows (which project over the sidewalk). Designed by Bryan & Gillam, the building smartly uses the bay windows as well as the extended basement to make the most of the narrow footprint. The basement itself is significant, not only because it projects well under the street, but because it was utilized by the Chinese community for public baths and barber chairs, and unconfirmed rumours suggest it had been connected to other neighbouring basements via tunnel. 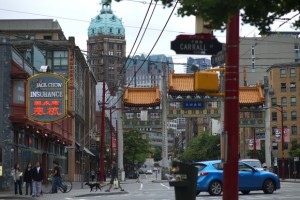 The Sam Kee Building is recognized as historically significant both on the City of Vancouver Heritage Register and the Canadian Historic Places Registry. It has been restored twice, once in 1966 and then again in 1986, and is currently under renovations in honour of its 100th birthday. The  Jack Chow Insurance neon sign that has been on the building since 1986 was one of the first to bring neon back to Chinatown, and is currently housed in the lobby at 1 East Pender.