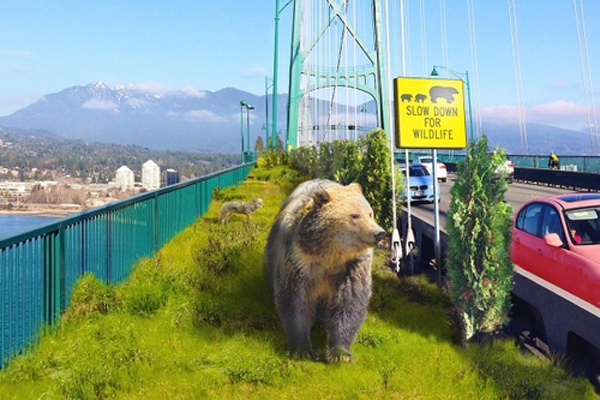 As a relatively young, modern city nestled between the North Shore mountains and surrounded by the Pacific Ocean, it is not hard to imagine Vancouver’s wild roots.

Even today, black bears still roam people’s backyards on the Vancouver’s North Shore, bald eagles nest around the University of British Columbia and whales have been spotted in False Creek on several occasions in the last few years. Just last weekend, 100 dolphins and 15 orcas were spotted in Howe Sound.

According to author  J.B. MacKinnon, “Vancouver is known for its connection to nature — a unique quality in a major urban centre. Despite this, our city has dramatically transformed the natural environment.” Whales spotted near Stanley Park in June 2013 (Photo via Brodus)

Only 125 years ago, the city was a rainforest. Today the city’s downtown core is densely packed with slim glass towers, its local mountains have been transformed to ski hills and suburban sprawl continues to creep into its forests.

To explore the city’s nature “as it was, is, and could be,” MacKinnon teamed up with the Museum of Vancouver to curate Rewilding Vancouver, a new exhibit that opened on February 27, 2014. It is inspired by his recent book, The Once and Future World.

Upon entering the exhibit, you watch a video of a grey whale spotted four years ago in Vancouver’s redeveloped community of False Creek – once an industrial wasteland for local sawmills.

“In 2010, Vancouverites were mesmerized when a grey whale came for a swim in False Creek, and in 2013 we were equally awe-struck by a beaver investigating the Olympic Village as a new potential home,” said MacKinnon. “Through the book and the exhibition Rewilding Vancouver, we seek to encourage people to discover what nature was like in Vancouver’s past, reconnect with nature as meaningful to their lives, and engage with efforts to make the city a wilder place.”

Through taxidermy, storytelling, soundscapes and compelling photo installations, the museum showcases what we have (coyotes, raccoons, black bears, salmon) and what we have lost (sea cows, ravens, wolves, elk) through urbanization. For example, many people think urban coyotes have been here all along, when in fact coyotes weren’t recorded within city limits in Vancouver until 1982. The exhibit ends with a challenge to imagine a wilder future for Vancouver through photo installations that illustrate tearing up streets to restore former salmon streams; reintroducing Grizzly bears in Stanley Park; and removing light pollution to see the stars over Downtown Vancouver.

“Almost everyone has experienced the loss of some treasured natural space — whether an entire forest or a simple vacant lot,” said MacKinnon. “This exhibition is a way to connect with that feeling, and also explore the unlimited possibilities of melding the urban and wild.”

A placard in the exhibit reads:

The history of nature is critically important to the way we see the world around us. When we forget that whales used to live here, absence of whales seems normal. When we remember, it becomes possible to imagine Vancouver with whales once again.

To understand nature today – and to plan for a wilder tomorrow – we first need to know what nature was like in the past.

Rewilding Vancouver reminds us that in our rush to embrace a more urban environment, we don’t have to reject the natural world. If we are careful and thoughtful in how we plan our cities, we can have the best of both worlds.