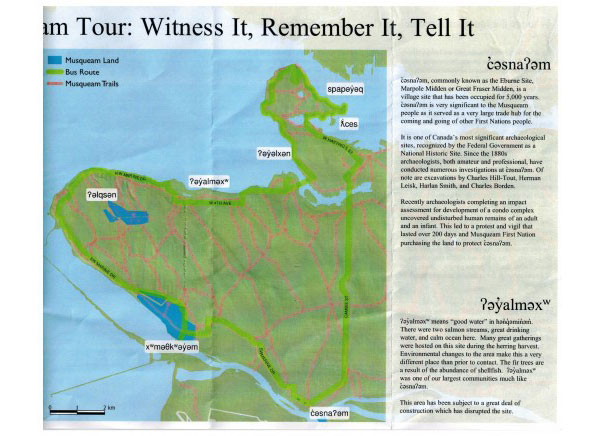 The Vancouver Heritage Foundation is piloting a project with the Musqueam Indian Band to offer a tour of Vancouver from a slightly different perspective then the usual whip around Stanley Park, Spanish Banks and the Museum of Anthropology. Actually we did all those things on a four hour bus jaunt one recent morning, but we also got some insights into traditional Musqueam territory and why several well-known sites hold significance for their people.

The first stop was the sketchy area behind the Fraser Arms Hotel. Turns out this uninteresting fenced-in piece of dirt, was once part of a thriving settlement for the Musqueam. According to our guide Terry Point, the land has been occupied for 5,000 years and is one of the most significant archaeological sites in Canada. Three years ago it looked like the Midden would be turned into a 108-unit condo development, until archaeologists dug up the human remains of an adult and two small children, kicking off a Musqueam vigil that went for over 200 days. The Musqueam subsequently bought back the land, but I couldn’t find out what they planned to do with it.

Most of the sites we visited were former warrior villages, and they were a vicious lot back in the day. They used to put their enemies heads on stakes at the mouth of the Fraser to keep out unwelcome visitors, and they buried their dead up in trees, leaving the bodies to rot and later gathering up the bones.

That’s of course how Deadman’s Island in Stanley Park got its name.

A June Saturday morning in Stanley Park is prime season for tour buses and after a bit of jockeying for position I really enjoyed the tour of the totem poles. Terry’s auntie Susan Point carved the gateway portals designed to represent the traditional slant-roof style of Coast Salish architecture.

Many of the roads we travelled (including Granville Street) were once a network of trails that spread out all over the city and were used by runners to warn the villagers of impending attacks or visitors.

We ended the tour at the Musqueam Cultural Centre in time to celebrate National Aboriginal Day.

There is another tour on Sunday July 27. See the Vancouver Heritage Foundation for details.