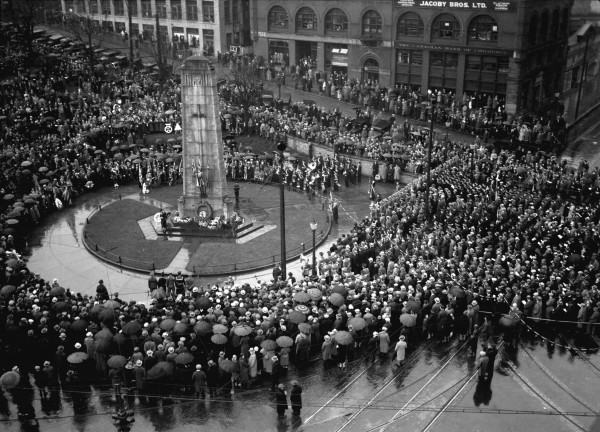 Across Canada there are over 6,000 monuments and cenotaphs dedicated to remembering those who fought in the Great War (1914-18). This year marks the 100-year anniversary of the beginning of this devastating conflict. Following the war, war memorials became common, erected in Vancouver as they were in many communities across Canada and Europe. These memorials created permanent structures, public plazas and gardens which altered our cityscape in lasting ways. Many memorials, installed to mark the First World War, were rededicated to also mark the Second World War and some also note subsequent conflicts. As Remembrance Day connects us to events that began a century ago, the memorials have become a permanent part of Vancouver’s landscape and a visual reminder of our collective history.

The unprecedented loss and violence of World War I created a need for places of remembrance, at home and abroad. Fallen soldiers were not repatriated, but instead were buried in the fields where they fought, no matter their rank or country of origin. There are memorials and cemeteries in Europe commemorating those lost in the places where so many died. These memorials also include the names of men and women for whom remains could not be found or identified.

Burial in the field of war meant that those at home did not have a grave site or other similar marker to commemorate those lost from their community. Local memorials became an important way for communities to honour them. Vancouver at that time was still a relatively small city and it was said that no one here was untouched by the devastation. Monuments were erected all over the city and following World War II, several memorial buildings were also added. 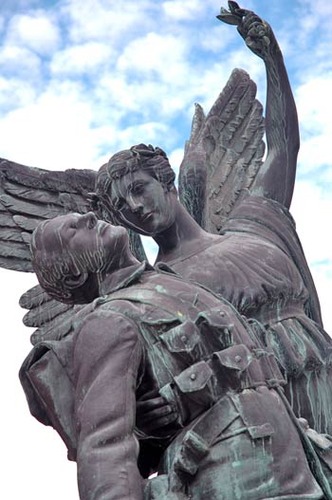 Installed in 1921, this bronze sculpture by Montreal artist Coeur de Lion MacCarthy is one of three identical sculptures installed in Canada. Commissioned by the Canadian Pacific Railway to mark the more than 1,100 CPR employees who perished during World War I, the statues were placed near CPR landmarks. Vancouver’s sits outside of Waterfront Station. The others are in Winnipeg (installed 1922) and Montreal (installed 1923). The dates of World War II were later added on plaques attached to each statues base.

“Winged Victory”, also referred to as “Angel of Victory”, was considered one of the most evocative memorial sculptures, depicting an angel carrying a deceased soldier to heaven at the moment of his death. While all three statues were cast identically, the Vancouver statue has its own mark of history. In the 1960s concerned citizens attempted to clean what they thought was dirt off the statue, as they felt its state was disrespectful. The “dirt” was actually natural patina that occurs on bronze over time. The scratch marks from their cleaning tools can still be seen. 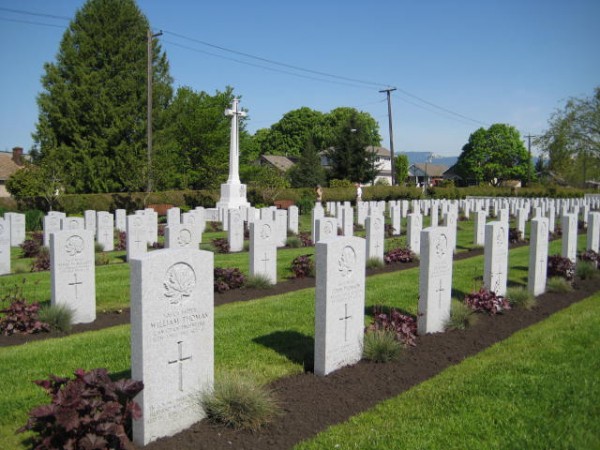 Mountain View Cemetery has four Fields of Honour commemorating Canada’s veterans and those from other Commonwealth countries and allied forces. There are over 12,000 veterans buried here, including over 570 graves that are maintained by the Commonwealth War Graves Commission. The upright monuments near the flag pole commemorate those veterans whose graves were not marked by 2006. Many still remain without a marker but one can be placed through the Cemetery’s donation program. There is also a granite memorial which was dedicated in 1983 to all Canadian military members who have passed away. 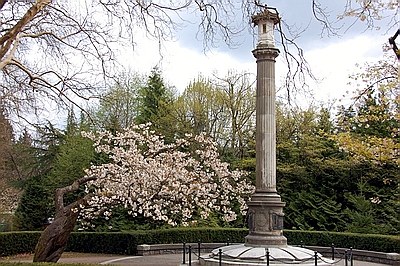 In April of 1920, a monument commemorating Japanese Canadians who fought for Canada was erected in Stanley Park. Built with private donations, the monument comprises a base listing battles where Japanese Canadians fought and a stone column topped with a Japanese-style lamp that was intended to stay permanently lit. The lamp, which had been lit with the unveiling in 1920, was extinguished in 1942 when attacks on Pearl Harbour led to the internment of Japanese Canadians. It was re-lit in 1985 with decorated First World War veteran Sgt. Masumi Mitsui in attendance. Until this year the monument had not received significant restorations for over two decades. Recent restoration work has been completed with the assistance of a Vancouver Heritage Foundation Restore It grant.

This year, the annual Remembrance Day ceremony held at the Japanese Canadian War memorial will not only mark the 100-year anniversary of the beginning of World War I, but also the restoration of the monument. 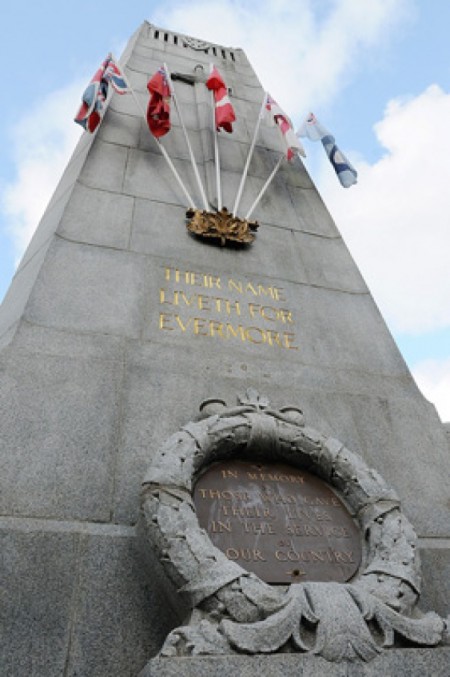 The largest Remembrance Day ceremony has traditionally been at the cenotaph in Victory Square. This location was significant from the beginning as it was the original site of Vancouver’s first courthouse, and the intersection of the Granville townsite (now Gastown) and the CPR townsite. The cenotaph was unveiled in 1924 to approximately 25,000 people and has since been the location of the annual Remembrance Day ceremony, making it the longest continuously running ceremony in Vancouver. In 2004, lamp standards shaped like World War I helmets were installed to encircle the cenotaph as well as throughout the square.