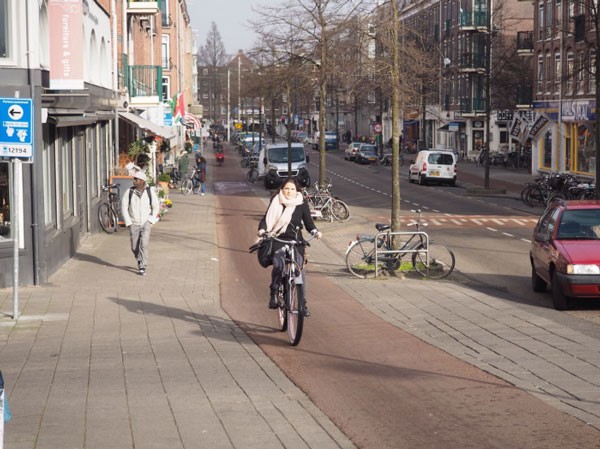 I recently had the honour of visiting Amsterdam. Renowned for its cycling, Amsterdam is a city where 48% of all trips made in the city centre are by bicycle. Further, a total of 78% of trips in the region are made by walking, cycling and transit. Only 22% of trips are made by cars. This is most impressive when observe cycling closely in Amsterdam. People of all ages, dressed in everyday clothes are carrying out typical, everyday tasks by bike. Also, significantly more women are traveling by bike compared to Vancouver.

With the resurgence of cycling around the world, Amsterdam is often the subject of case studies. People assume that the Dutch operate from an elevated understanding of all things cycling. However, there have been very surprising discoveries while exploring this city. Many of these observations reveal that the Dutch are not a divine cycling culture, they opt for relatively simple designs that encourage a safer and more inviting cycling and walking environment. Below, I highlight a few of those observations.

1. Cars are still permitted, even when space is limited. 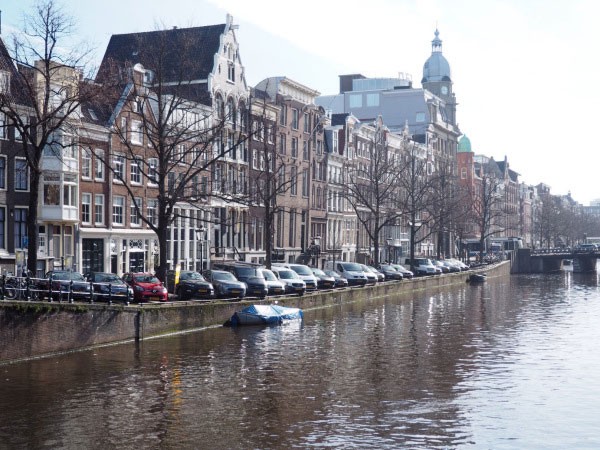 Despite the high rate of people cycling, cars are still seen parked in every nook and cranny of the city. Supporting cycling does not mean that you banish the vehicle outright, you permit access for cars but tolerate them at slower speeds. This demonstrates that other cities can achieve high cycling rates while still accommodating the automobile.

2. When you don’t want cars, use barriers to keep them out. 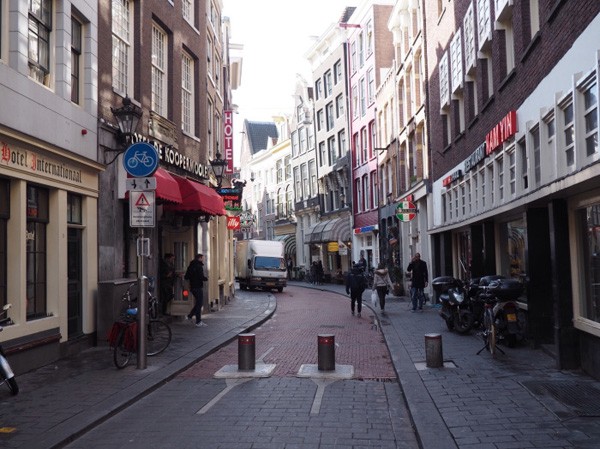 Electronic bollards in the core keep vehicles out but permit critical deliveries.

The Dutch do not operate from an elevated state of mind. When the Dutch want to keep traffic out they put up barriers. When they want traffic to slow down they build the road to feel unsafe at unsafe speeds. The Dutch do not put their faith in people’s ability to anticipate error while driving. Consequently, the Dutch physically build the roadway to get the results they want – which is to slow down traffic, and to protect people walking, cycling and using transit. When you narrow the street by using chicanes, traveling in a straight line becomes impossible. This calms the street as people driving must be extremely attentive while driving. Ultimately, this approach makes streets pleasant places to live, work and play.

3. Not all cycling routes are separated from vehicle traffic. 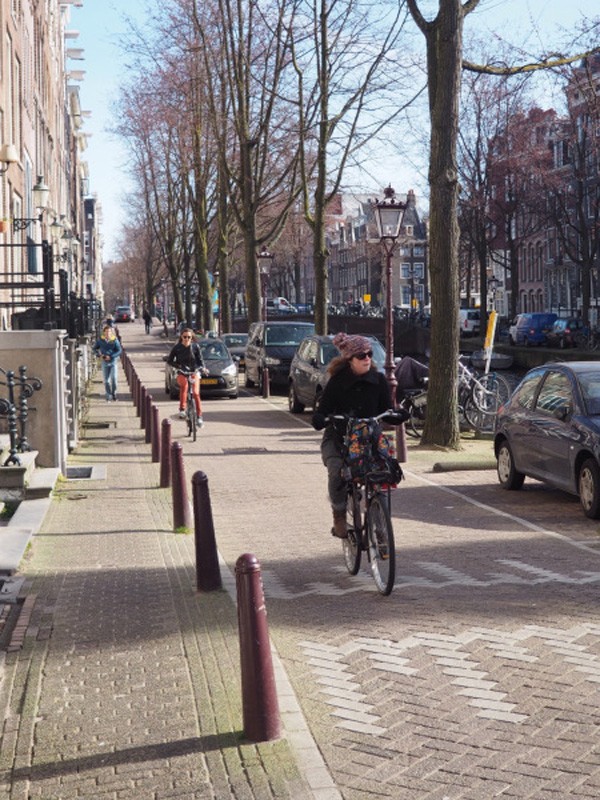 A shared street slows down traffic, but mixes cycling and driving.

In North America there is currently a fixation on adding separated cycling lanes in every city. While it is great to finally see a movement to provide safe and convenient access for cycling, we must not assume a one size solution fits all. This type of thinking is what led us to our current state of affairs where we built big and wide to accommodate and prioritize the automobile. We must not lose sight of  other tools at our disposal which can help achieve the same results.

Only 50% of the cycling routes in the Netherlands are separated from vehicular traffic. According to the C.R.O.W. Manual, the Dutch only use separated or protected cycling lanes when the traffic volumes and speeds are sufficiently high enough to pose a threat to the lives of people cycling. Alternatively, the Dutch use painted bike lanes, shared streets and woonerfs (a residential version of the shared street). In all cases, the Dutch ensure that the physical design of the street only tolerates a safe vehicle speed – they do not rely on suggestive tools such as posted speed limits. 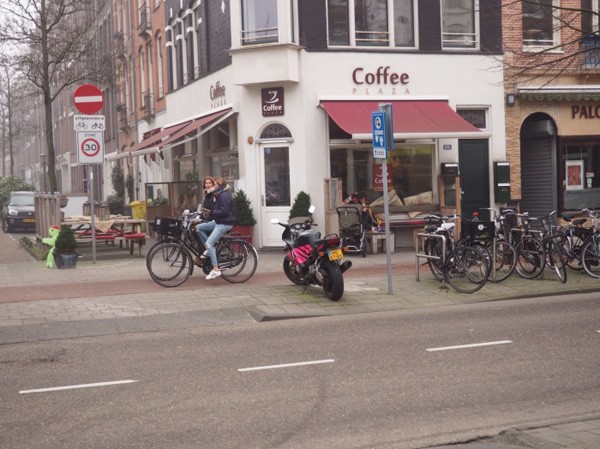 A separated bike lane next to retail.

5. Parking and vehicular access is provided on almost all retail streets. 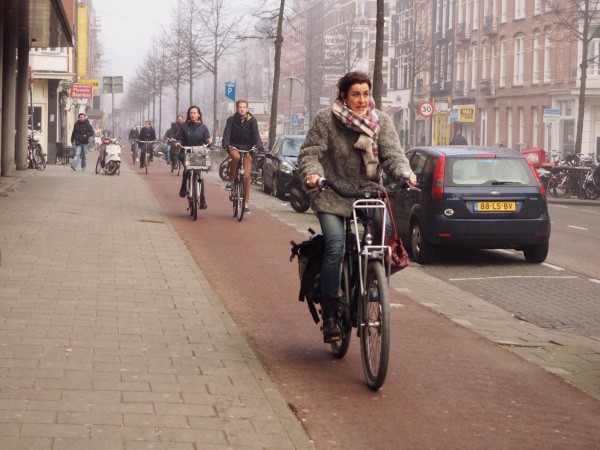 On street parking is maintained on a neighbourhood retail street.

With the provision of on-street parking on almost all retail streets in Amsterdam, it is clear that providing access for vehicles is still important. Parking is also critical for providing access for deliveries of supplies. This way all modes of transportation can access the businesses safely and comfortably, maximizing the potential patrons for businesses. 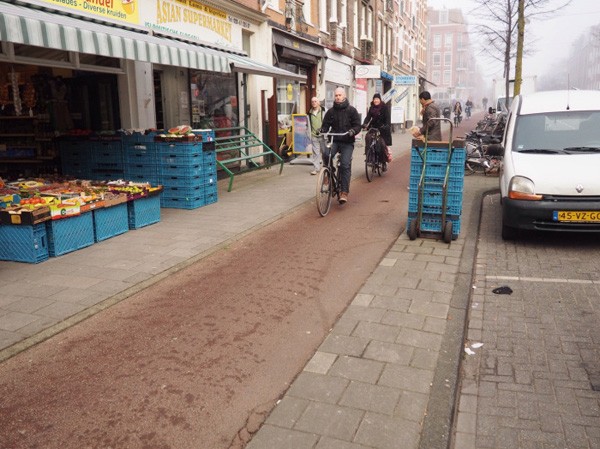 Deliveries being made from side street parking.

As mentioned above, by maintaining on-street parking on retail streets, access for loading and unloading is still provided for delivery trucks without having them block traffic by double parking in the travel lane. In addition to this, large vehicles can be found in most places in Amsterdam.

7. Street widths in Amsterdam are comparable to North America. 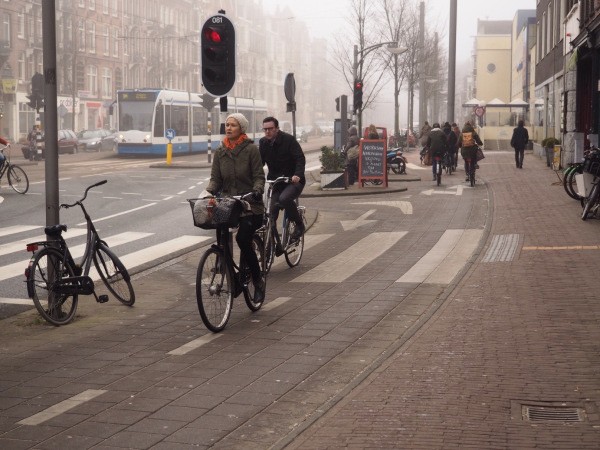 Often, the excuse in North America is that there is no room on the streets for bike lanes. The streets in Amsterdam have comparable widths, but can still accommodate a complete street including wide sidewalks, patios, two cycling lanes, two parking lanes and two lanes of traffic. Even larger streets accommodate at least two lanes of transit and transit stops. 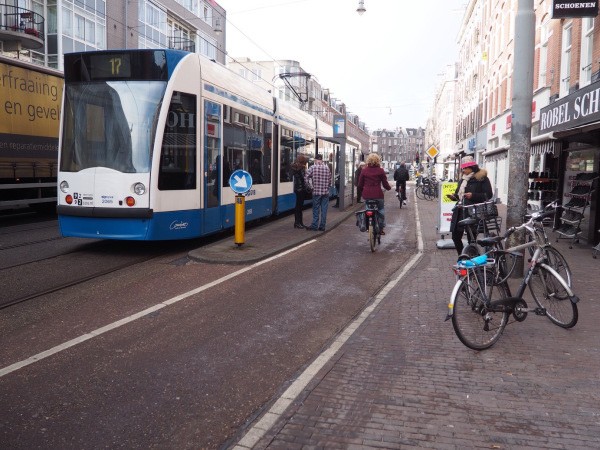 We need to stop reinventing the wheel! Often in North America bikes and buses will share a curb side lane creating a dangerous situation. People cycling are forced to overtake the bus at transit stops, which inevitably results in a bus-cycling chicken game with each constantly overtaking the other.

The Dutch have already figured out how to make cycling and transit coexist by using floating transit stops and generous sidewalks. People cycling can go around the transit stop still maintaining their dedicated right of way, while transit patrons can board and disembark the vehicle safely and efficiently.