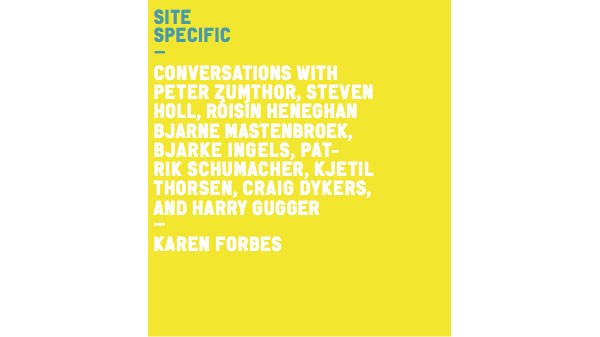 Site Specific: Conversations with Peter Zumthor, Steven Holl, Róisín Heneghan, Bjarne Mastenbroek, Bjarke Ingels, Joshua Prince-Ramus, Patrik Schumacher, Kjetil Thorsen, Craig Dykers, and Harry Gugger, is a collection of interviews between editor and Professor of Art at University of Edinburgh, Karen Forbes, and internationally renowned architects on the role that “site” plays in their work processes. While the title is a handful, the book itself is composed of extremely digestible four to seven-page interviews with each architect: each book-ended by images featuring relevant projects to the respective architects’ firms’ bodies of work.

Site Specific is not introductory reading on the methods or importance of understanding site in designing the built environment. It is instead, a high-level and nuanced set of conversations with highly acclaimed architects which attempt to reveal different modes of working or understanding the concept of a site in architectural practice. Ironically, the more site-specific the projects under discussion were, the more difficult some of the interviews were to follow. The book requires a prerequisite depth of knowledge about each architects’ body of work, or else a laptop at hand to simultaneously browse their firms’ websites while reading, to make up for a lack of images (not every project mentioned is pictured).

The strength of the interview format lies in it’s raw, unedited narratives of designers telling their own stories. Where readers must put in a little more work to understand the scope, location, and context of the projects discussed and the interviews themselves, we are rewarded with the ability to distill our own interpretations of the narratives. This is a quality easily confounded by high-praising third-party authors of architectural monographs.

Forbes structures the book by beginning with an abstract from Peter Zumthor, and transitions from more traditional interpretations of site as the property on which the architectural object stands (Steven Holl, Steven Holl Architects), scaling up to illustrate working methods that define the site as a country with existing economic, cultural, or material patterns (Bjarne Mastenbroek, SeARCH), or even the building itself as the site to bear witness to future social movements and broad public aspirations (Kjetil Thorsen and Craig Dykers, Snøhetta).

Central to the curation of the conversations are the various processes in which architects create and respond to restraints and create parameters for design: also referred to as form-finding (Holl), composition (Zumthor), coding affiliations (Patrik Schumacher, Zaha Hadid Architects), and translocation (Joshua Prince-Ramus, REX).

Forbes ties a few threads between the chapters, one being the Munch Museum competition in Oslo, which several of the interviewees participated in, and another more subtle provocation asking the architects to define their position after modernism and post-modernism. In this way, the book highlights the growing role of the architectural competition in generating commissions, as it did for Róisín Heneghan (Heneghan Peng Architects), while attempting to define contemporary architectural movements in Europe and America.

To me, the most interesting examples were Bjarke Ingels’ (BIG) and Prince-Ramus’ (REX Architecture) ideas of evolution, adaptation, and translocation of projects originally designed for a different site being successfully translated onto another. They rightly emphasize the importance of continually testing, re-adapting and transforming ideas, and recognizing patterns to revive “dead projects” – suggesting that the original site a building is designed for may not necessarily be the best possible place or set of contextual conditions for it to come to life.

Another progressive theme sees architects defending work that was/is critiqued for being out of context or scale on the present “site”. By categorizing their new buildings as part of a new “site,” they elucidate architecture’s role in helping spur economic development, create new types of social space, or reframe preconceived notions of making. Sites are never static, even after the building has finished construction.

Both can be interpreted as instances where an architect has failed to fulfill a very romantic idea of creating buildings which everyone agrees fits the site or meets the brief. More often than not, the architects featured in Site Specific are dilettantes (Harry Gugger, Harry Gugger Studio) or forward thinkers concerned with challenging the status quo. Their sensitivity to the conditions of the places in which they work and the relationships they cultivate with their clients are evident in their work.

Forbes is clearly a well-travelled and well-researched editor, having visited nearly all of the works discussed and with some idea of the project background and/or client. She is at an advantage to the readers who can only understand many projects through the reproduction of images: itself an obstacle in truly understanding a site and assessing it’s architectural response. This being the case, Site Specific deserves to be read twice: once for inspiration, and again during architectural pilgrimages, on-site.

If you want more information on Site Specific, visit the ORO Editions website.