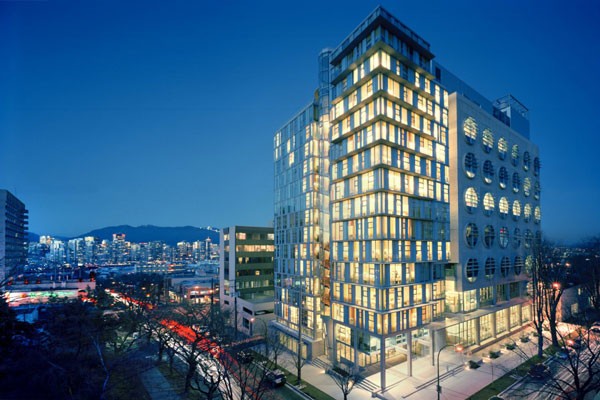 It is well known that environmentalism and sustainability are critical elements of local environmental groups and organizations, such as the world’s biggest direct-action environmental organization, Greenpeace, or the David Suzuki Foundation, founded by activist and Vancouverite Dr. David Suzuki. But, less discussed is how this mentality is manifested in Vancouver’s built landscape. With this in mind, the BC Cancer Research Centre is a great case study.

A little background is necessary. Broadly speaking, Vancouver’s citizens are encouraged to engage, and are active participants in, environmentally conscious choices and sustainable living. According to a study, 81% of Vancouver’s population are well informed about the negative effects of global warming. And, out of all other North American cities, Vancouverites are the ones most willing to reduce their greenhouse gas emissions for the greater good.¹

It was in this spirit that mayor Gregory Robertson launched the ‘Greenest City Initiative’ in 2009, pledging to make Vancouver the world’s greenest city by 2020. The city’s ‘green spirit’ gained further momentum when Robertson’s Action Plan 2020 won a C40 Cities Award, at this year’s United Nations Climate Change Conference in Paris (COP21).

Sustainability is also adapted to the context of urban planning and architecture. The Leadership in Energy and Environmental Design (LEED) certificate is an appraisal system that rates the sustainability and design of buildings in order to evaluate how green it is. As of October 2015, the City of Vancouver has the second highest number of  LEED-certified projects (120 in total) in Canada.

Architecture becomes a key component in the city’s Greenest City Initiative. By incorporating sustainability in the architectural landscape, Vancouver visually highlights its image of being the world’s greenest city.  Furthermore, positioning buildings with high ethical connotation at decidedly visible intersections within the city can set the impulse for branding a city’s image in a very direct, broadly accessible and visual way.

The BC Cancer Research Centre (hereafter BC Centre)  is an example of how creativity and innovation combined with sustainability and location form a symbiosis for a successful and lasting architecture.

BC Centre is the very first research clinic in Canada to receive a LEED Gold certificate. It was founded in a joint venture between the IBI Group, Henriquez Partners Architects and BC Cancer Foundation, and opened in 2005. Aspects that lead to the LEED certificate included 26% recycled materials for the building, 43% reduced water consumption through urinals that work without water and energy efficient light usage through automatically regulated light sensors.²

Three factors were pivotal points for the successful marketing of this building:

The building is set at the corner of West 10th Avenue and Heather Street in the popular Mount Pleasant neighbourhood, just south of Broadway. Richard Henriquez, founder and principal of Henriquez Partner Architects, was the lead architect for the project.  The building is a visual allusion to the human DNA and the health sciences, referencing the centre’s focus on cancer research, on the buildings exterior. 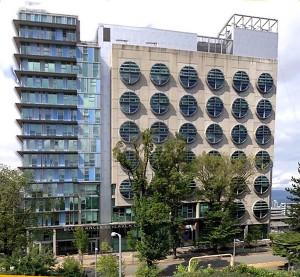 In form, a trio of visually distinct-looking towers rest on a horizontal podium that runs along the east-west axis. The main feature of the north and south facades, facing Broadway and 10th Avenue respectively, features 68 circular-shaped windows that are each half covered by horizontal with sheet metal forming outdoor blinds. These distinct looking windows are the hallmark of the building and reference petri dishes—one of the main apparatuses within the health sciences. 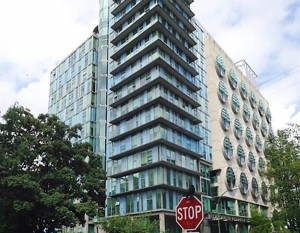 All these features make this building unique and highly recognizable reemphasized by its primary location. One of the few parts accessible to the public is the lobby, where the LEED Gold plaque is placed visible to everyone.

From an architectural perspective, the architecture team’s ability to execute inspiring and innovative design with advanced building systems contributed to the building’s success.  This is also strengthened by the team’s ability to articulate the BC Centre‘s research focus in a visual manner that also engages the public’s perception.

For more information on the BC Cancer Research Centre, visit the Henriquez Partners Architects website.