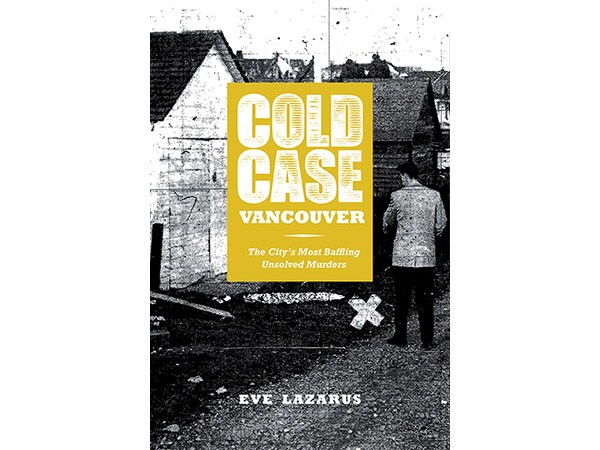 Cold Case Vancouver is a bone-chilling journey into some of Vancouver’s most monstrous and heartbreaking unsolved murder cases. Using information gathered from the police archives, newspaper clippings and vital statistics, well-known local historian and author Eve Lazarus explores five decades of unsolved murders and places them on our city streets and in our neighbourhoods.
The unsolved mysteries date back to 1944, with the murder of Jennie Conroy, a grain loader from North Vancouver, whose investigation devolved into a smear campaign spurred on by the independence of a working class woman. Ten years later, Robert Hopkins was found strangled in his own home, his murderer presumed to be the result of “homosexual panic defence”.
With every insightful page, the cases are brought away from a post-war, seemingly fanatical, bloodbath and closer to a more present day fanatical bloodbath. Consequently, the locations become ever more familiar and scenarios more terrifying. Most recent being the murder of Muriel Lindsay who was found beaten to death in her apartment in the Westend’s Mole Hill. Presented with the horrific, gory details of these many evil acts, one can’t help but wonder how many of the crime sites are now condos.
Yet, with all the unease evoked, there is also a sense of hope. As decades pass, cold cases are dusted off and reexamined by inspired police staff, or due to new tips from the public. So, while these familiar places will always bear these memories, perhaps, one day these might have closure.
***
For more information on Cold Case, visit the Arsenal Pulp Press website.
**
Anya Paskovic is an urban planner, Vancouver flâneur and world traveller interested in public spaces, urban design and community planning. By continuously questioning the relationship between people and place – places we love, we tolerate and we ignore – Anya seeks to create functional and engaging environments that reflect community values and respect the natural environment.