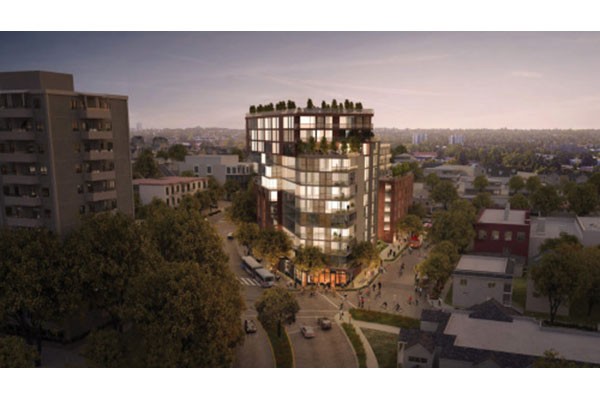 My Vancouver eastside neighbourhood of Commercial Drive was featured in the media recently for opposing another “high-rise” tower.

Previously, its residents came out united and vehemently opposed to a proposed 36-storey tower that was a drastic contrast from the current predominantly low-rise form in the neighbourhood. The massive proposed tower was surreptitiously added into a draft community plan, allegedly by senior staff at the City of Vancouver after an extensive public engagement process – where it had never been mentioned.

The result of this action caused a huge uproar and completely derailed the community planning process to the point that it had to be halted and revamped. Since then, there have been trust issues between the City of Vancouver and local residents when it comes to community planning.

Unfortunately this simmering resentment is threatening to boil over in opposition to a new, more modest 12 storey tower with social housing proposed by Boffo Properties at Venables and Commercial – an area of the community that is in desperate need of revitalization.

Before/After of Proposed New Development at Venables and Commercial

The new tower will replace a rundown building that is currently home to the Kettle Society, a non-profit that supports people struggling with mental health issues. It will house the Society’s new drop-in centre, in addition to 30 supportive housing units.

“It’s a legacy to ensure that the folks we serve will still be a part of the Commercial Drive community — that they will have a safe place to come,” said Nancy Keough, executive director of The Kettle Society in a CBC interview.

Of course, 200 market housing units will also be added, which will allow the developer to support the new Kettle facilities while also raising the buildings height substantially.

“We do need to be able to fund the social component of it and this is a project that is self-sustaining,” said Developer Daniel Boffo.

About 25 per cent of units will be two or three bedrooms, according to Boffo. This addition of family-friendly housing stock is something analysts say Vancouver desperately needs.

A small group of residents called “NO VENABLES TOWER”  are coming out against the development, claiming it is too high. According to their petition with just over 1000 signatures:

“Having a 15-storey tower — or anything taller than its current four-storey zoning — right at Venables and Commercial would really change the nature of our neighbourhood forever. “

While I understand the group’s fear of change, there are a few things that need to be pointed out.

Height: First of all, the proposed building is not that high and there is a 12-storey tower of seniors housing one block away. It is also in a high traffic area – Venables Street – that is predominantly light industrial and commercial buildings. In other words, this is not an enormous tower landing on a single-family neighbourhood.

The issue of affordability: Not sure if you have heard, but Vancouver is in the midst of a housing affordability crisis. Virtually no young person can afford a single family home in the city and land is at a premium. We need to start building homes that people who want to live, work and raise families in the city can afford. I see all the “NO TOWER” signs on lawns of people already comfortably ensconced in their single family homes that they probably purchased over a decade ago. They don’t want Commercial Drive to change, but they don’t realize that if we don’t create affordable homes for young people, the area might suffer the same fate as the west side of Vancouver, where homes are being sold to foreign investors who are not particularly “invested” in the community.

Distrust left over from the Grandview Woodlands Community Plan: Unfortunately, the City of Vancouver made a poor decision in how it proposed a massive tower at Broadway and Commercial a few years ago (they admitted this too). As a result, there is still negative feelings in the community that will likely affect any future proposed tower. Even I was not in favour of the previous tower. It was too dense, too high and out of character with Commercial Drive. However, I do think the current Boffo development is an appropriate scale and I support it as a new home for the Kettle Society, and social and market housing.

Legitimate fear about change: People who live on Commercial Drive are passionate about their community and want to see it preserved. But we have to ask ourselves – what are we really preserving here? In this case, a neglected part of the neighbourhood – the corner of Venables and Commercial Drive – that is full of old, rundown buildings and is not very walkable (the only real anchor of that area is a bakery called Uprising Breads, which will not be affected by the new building). The new tower would breathe life into a vacant part of the community. The risk is that with one tower comes a whole lot more, which may or may not be appropriate. Each new development deserves to be debated by the community.

I hesitate to call the NO TOWER coalition “NIMBYs” because my fellow former city planning commissioner Dr. Setty Pendakur rightly states that: “If we classify any disagreement with development and densification as NIMBY, then we might as well forget about civilized conversation and serious and positive citizen participation. I remember similar outcries in the mid-sixties and early seventies when we marched against city centre freeways.”

We need healthy conversation on what is best for Commercial Drive. But as a resident, I believe this is a good addition to the neighbourhood. Share your thoughts in the comments.

You can add your support for the Kettle Boffo Project here

If you are against the project, you can sign the petition here.