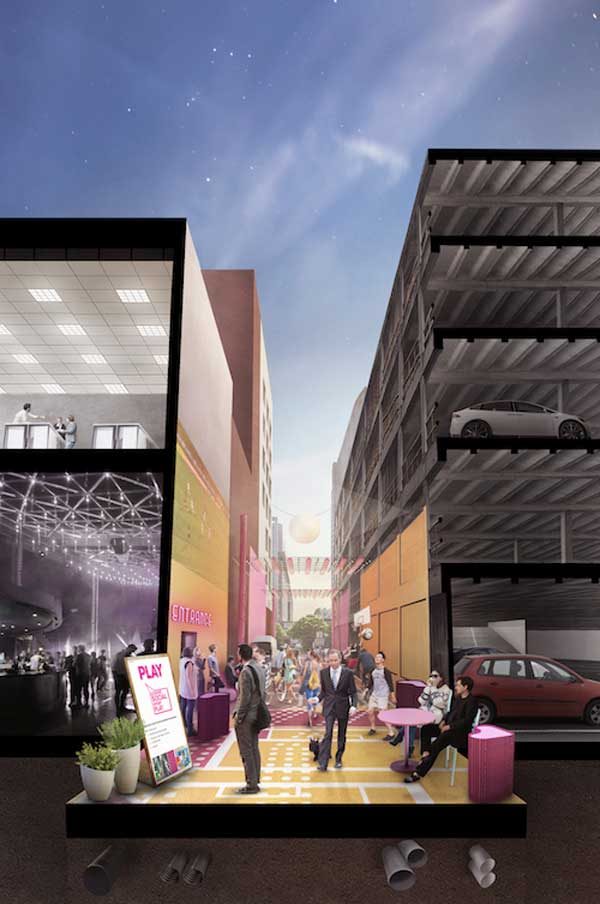 This week, the Downtown Vancouver Business Improvement Association (DVBIA) will be unveiling its first More Awesome Now reimagined laneway. Work is underway to transform the laneway that runs behind West Hastings street between Seymour and Granville, from utilitarian service corridor into a bright, playful public space to be shared by people and vehicles.

More Awesome Now is an experiment in reshaping city laneways into engaging, accessible public spaces that contribute to the vibrancy of the city. The project is a partnership between the DVBIA, the City of Vancouver’s VIVA Vancouver program, and HCMA Architecture + Design.

“Laneways serve an important business function, but for a big part of the day they are underused and full of potential,” says Charles Gauthier, President & CEO, DVBIA. “So we asked, if we make our lanes more appealing, could they become public spaces? More Awesome Now is an experiment in turning laneways into places of discovery – friendly, accessible, and lively parts of the urban streetscape.”

In juxtaposition to its location in the heart of the business district, the reimagined Hastings West laneway is themed “Play”. The lane has been painted in bold pinks and yellows and soon will be outfitted with basketball hoops and furniture. In the coming weeks, decorative lighting and a geolocation orb will be installed. The public is invited to use the laneway for play, exercise, or socializing.

“Boldly re-imaging downtown laneways can bring vibrancy to underutilized spaces in the city year- round,” says City of Vancouver Director of Public Space and Street Use, Margaret Wittgens. “The City is thrilled to be working with community partners to enhance Vancouver’s walkability, liveability and sense of creativity one laneway at a time.”

The laneway will be shared by people and vehicles, which will continue to access the lane for service purposes. There’s no formal schedule of events planned for the space, instead, property owners, tenants, and visitors will share responsibility for enjoying, cleaning, and monitoring it.

Vancouver’s downtown street grid includes more than 200 blocks that are bisected by a lane. Reimagined, these laneways have the potential to increase the public pedestrian area by up to 30%. The Hastings West laneway is the first of what could become a network of interconnected downtown laneways, each with its own sense of place and evolving identity. There are plans to bring the concept to the Granville Street entertainment and Alberni Street fashion districts in the near future.

Last year the DVBIA conducted Re-Imagine Downtown Vancouver 2040, a collaborative visioning process. The desire for more public spaces of every scale, including rooftop patios, animated laneways, and large public squares, was a major theme that emerged from the process.

The More Awesome Now Hastings West laneway has its official launch with an event on the evening of Thursday, September 15, 2016 from 5pm-8pm. The public is invited to attend.

The launch is part of the Placemaking Week’s #POPCrawl or Power of Placemaking self-guided tour of downtown public spaces. View the map: https://www.google.com/maps/d/u/0/edit?mid=1lXd573wBf- xME7XC1AT0dNeXtv0

ABOUT DOWNTOWN VANCOUVER BUSINESS IMPROVEMENT ASSOCIATION
The Downtown Vancouver Business Improvement Association represents the 8,000 property owners and tenants in the 90-block central business district and downtown south area. Based on input from 11,000 Vancouverites through its Re-Imagined Downtown Vancouver process, it is working with partners to create more awesome public spaces, including laneways.

ABOUT HCMA ARCHITECTURE + DESIGN
HCMA Architecture + Design challenges the traditional boundaries of architectural practice by asking one question. “How do we achieve the maximum positive impact through design?” That curiosity leads to technological innovations, valuable community engagements, and ultimately to positive changes in people’s lives. From planning and design, to consultation and evaluation, it takes projects beyond what’s expected, and beyond what’s trending, to deliver places that maximize potential.

ABOUT VIVA VANCOUVER
VIVA Vancouver is a City of Vancouver program that transforms road spaces into vibrant pedestrian spaces. In collaboration with community groups, local businesses, and regional partners, VIVA facilitates short- and long-term street closures throughout the year, creating public spaces for walking, lounging, and lunching. These spaces enhance the city’s sense of community, encourage walking and cycling, and benefit local businesses.