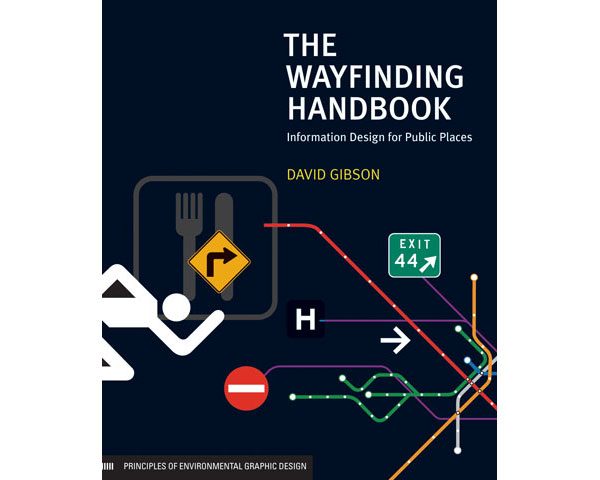 Navigation is a sophisticated and complex practice, but also one that we participate in every day. The environment we move through provides the navigational cues: some are intended for that purpose, while most have some other primary function. The act of wayfinding is as old as human behavior; the term and profession of wayfinding design (sometimes called environmental graphic design) originated just fifty years ago, with Kevin Lynch’s Image of the City.

Because of the way humans orient themselves in their surroundings, analyzing light quality, terrain, materiality, scale, text, sounds, scent etc., wayfinding is interdisciplinary by nature. Wayfinding design, in turn, draws from a variety of fields, including architecture, graphic design, psychology, anthropology and physiology. The Wayfinding Handbook: Information Design for Public Places provides a concise and practical understanding of the theory and process of this niche type of design, revealing the ways navigational systems transcend scale, media, language and discipline. Giving the design of such systems a name and practice in its own right, The Wayfinding Handbook fulfills its promise to be a “manual for students, teachers, professionals and clients”.

Gibson’s interest in the role of the designer as an advocate for the end user is supported by multiple strategies for understanding the needs of users and clients. Communication and thorough research is stressed as critical, and Gibson encourages the designer to empathize with every possible user in every possible circumstance, as any designer should. The author also warns of the disorientation and panic that ensues when the navigational system breaks down. As much preparing the designer for how to relate to the client and user, The Wayfinding Handbook readies clients for the type of information to provide and illustrate the array of options in terms of developing a wayfinding system.

A wonderful chart orders the design process, which could be applied to almost any type of design. It breaks down several phases within Planning, Design and Implementation, with further elaborations into deliverables at each phase, pointing to other parts of the book for more detailed information. In fact, this book does well what so many books about navigation fail to do: it employs a working navigational system within its own design. This subtle yet very helpful detail demonstrates the value of some of the tools described: information hierarchy, orienting clues, appropriate typesetting and colour coding.

Continuing to relate design across scale, Gibson uses the organizing structure of cities as a metaphor for dividing and understanding information in signage. The four urban strategies, here applied to wayfinding, are districts, streets, connectors and landmarks. These strategies are used to inform the appropriate locations and types of signage, and to organize the information within them. Content design is also discussed in terms of branding, placemaking, typography, layout, colour, symbols, maps and media. Numerous examples are provided at every phase. This toolbox of approaches builds towards generating a family of signs, maps and spatial cues. It emphasizes the benefit of wayfinding being considered from the outset of a project, and of collaborations between architects and wayfinding designers.

What The Wayfinding Handbook doesn’t cover, however, is probably one of the most common and difficult situations encountered by wayfinding designers, and particularly those just entering this field: how to redesign a navigational system where an old system is already in use. This is a complex problem, as it involves making adjustments where problems arise, without causing mass confusion by renaming, renumbering or erasing working systems. Gibson does a great job of educating about the best possible scenarios and the best case studies, but does little to illustrate how to solve some of the most common predicaments. Some of the more useful information about tricky situations can be found in the ‘Other voices’ sidebars, in which well-credentialed professionals provide anecdotes about their own practice. (For example, Jack and Gay Reinick touch on whether or not to orient a plan with north up when that is counter-intuitive to the way one enters a building.)

Despite lacking a chapter on integrating old and new design, The Wayfinding Handbook is an exciting and very clear guide for those with an interest in the field. If you are at all interested in the way people respond to space, this book will make you want to design signage. Gibson provides a solid theoretic background as a point of departure for a comprehensive design toolbox that jumps across media, discipline and scale. Useful for the budding designer, the urban wanderer and the corporate client, The Wayfinding Handbook is highly recommended.

For more information on The Wayfinding Handbook, visit the Princeton Architectural Press website.

Laura Kozak is a designer, project coordinator and camping enthusiast. Her ongoing interest in the collaborative design of the urban environment informs her teaching and research practice. She has a BFA from Emily Carr, a graduate degree in architecture from UBC and maintains an independent design practice.