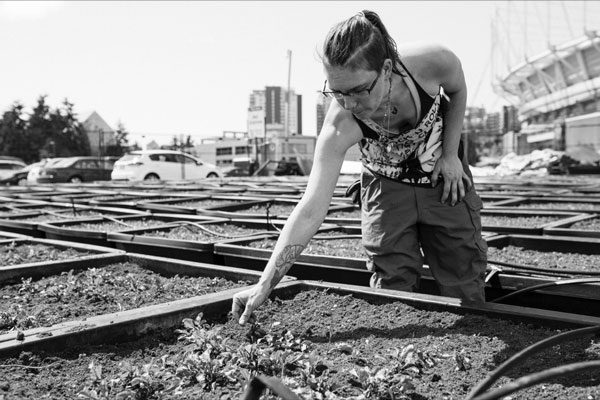 Looking for a new podcast in your life? How about one with a local flavour? In “The Strait and Narrows” – an exciting new six-episode podcast series – host Melissa Bruntlett journeys beyond the confines of Vancouver and collects residents’ stories from across the entire region. These narratives reveal the surprising successes, failures, hopes, and struggles that are rarely discussed in traditional media outlets.

Bruntlett’s family, like many, moved to Vancouver ten years ago, and didn’t know much about the surrounding municipalities. Throughout the series, she learns why people move here, how recovering addicts give back through farming, how people are fighting unaffordability, and that everyone just wants their family to be safe and happy.

“I would have never known moving here would inspire such love for local food,” Bruntlett says of her experience in the food episode. “Meeting the people who make that possible has given a whole new meaning to my morning smoothie.”

The podcast started when former city councillor Gordon Price approached Modacity – a local media production company – with the idea to raise awareness about the difficult issues that Metro Vancouver faces heading into the 2017 provincial election.

Modacity and its creative team liked the idea of producing something beyond the usual Vancouver-centric stories. The team decided to try the podcast format. It was an enormous undertaking that took over a year to write, record, and edit.

Over the course of that year, the team was fortunate enough to interview local leaders such as Agricultural Land Reserve Founder Harold Steves, Kwantlen First Nation’s Luke Dandurand, and Adam and Brent Mills of Four Winds Brewing Co.

But one of the most memorable moments came when they sat down with Shirley Chan, who – in the fall of 1968, at the age of just 21 – organized her Strathcona community against a proposed freeway that would have divided and devastated the city forever. “They may have lost the memory, but they enjoy the legacy,” reflects Chan in episode three.

Stories from our neighbours about the city we live in can be heard or downloaded at “The Strait and Narrows” page, or via iTunes, Stitcher, or Google Play.