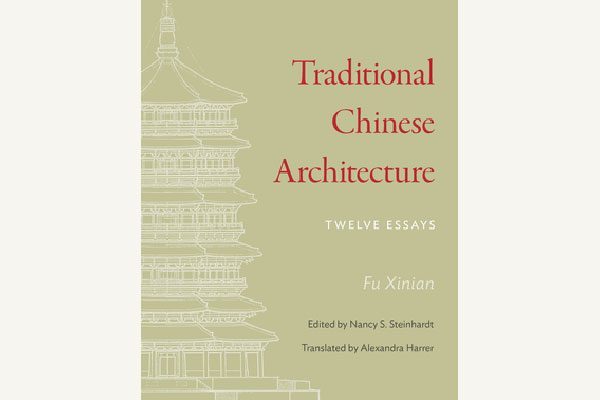 Fu Xinian was part of the Second Generation scholars, who worked at the Tsinghua University under the supervision of one of the founders of the First Generation scholars, Liang Sicheng. Subsequently, Xinian’s research work became well-known in Europe and North America through the translation of his leading essay Chinese Traditional Architecture in 1984. Ever since, his work has been a major contributor in understanding the interplay between the preservation of traditional design and new inventions in Chinese architecture.

Traditional Chinese Architecture: Twelve Essays is the most recent of Xinian’s translations. Much larger in scale than previous publications, the book is a series of 12 essays on Chinese Architecture from the Warring State Period (475-221 BCE) to the Ming and Qing Dynasty (1644-1911).

The translation project was spearheaded by Nancy Steinhardt, Professor of East Asian Art at the University of Pennsylvania. Her goal was to “inform an English-reading audience who has read a survey of Chinese architecture […] or has spent enough time in China to have seen buildings beyond China’s major cities and sites (Steinhardt, xvii).”

The book approaches the subject matter under two questions:

The first 25 pages of the book consist of a list of the 120 illustrations, all done by Fu Xinian himself, the Preface as well as an editor’s note written by Shatzman. This is followed by an overview of the Chinese Dynasties in chronological order, a Map of China and a biography of Fu Xinian.

The main portion of the book is comprised of the 12 essays, which are structured chronologically, starting with a chapter that deals with the representation of early Chinese Architecture on vessels depicted during the Warring States. Each of the chapters consists of an introductory paragraph by the editor followed by illustrations such as drawings of floor plans, elevations, bracket sets and birds-eye view site plans drawn by Fu Xinian.

A particular strength of the book is the detailed explanation of the Yingzao Fashi—the architectural multi-volume treatise from the Song Dynasty that describes the function, form and components of the Chinese Bracket Set. The treatise is used extensively as a source of reference in chapter seven that offers detailed outline on the building modules “cai” and “fen”, along with the height of the modular units in Tang and Song Dynasty.

The builders applied the cai as the basic module for design and construction of timber frame building and the fen as its subsidiary unit. The usage of the cai and fen enabled the onsite construction of the jointed timber-frame structure, which accelerated the building process of the edifices.

Xinian discovered that the concept of modularity as the basis for Chinese construction extended to building units as large as cities, and that the surrounding buildings within a courtyard, building complex or even a city are aligned in a way that the main building is positioned in the geometrical centre. He also derived data from mapping results of Beijing and found out that each architectural complex aligned with Beijing’s main north-south or east-west axis was built on a modular grid and that the building units had fixed dimensions. His extensive research concludes that this modular system was implemented for important buildings as well as imperial cities as early as the Tang Dynasty, extending all the way to the Ming and Qing Dynasty.

Chapter seven is the most compelling and arguably most technical chapter, followed by chapter eight that furthers the discussion on the modules in pre-Tang wooden architecture, timber-frame structures and the Bracket Set. The latter is the primary identifying feature of Chinese construction that helps to date a building and determine regional aspects of Chinese architecture.

The chapter’s focus emphasizes the geographic differences between architecture in Northern China and Southern China, examining variations between imperial and nonofficial architecture: “Do regional building systems exist in Chinese architecture?” And are there “[…] systems distinct from official, government-sponsored constructions?”

The chapter starts with the premise that there is an official style in Chinese architecture that can be traced back from Tang (618-907) to Ming Dynasty (1368 – 1644). It concludes that differences between architecture in North China and South China evolved over the process of transitioning between geographic locations.

As a bookend, each of the Chinese terms mentioned in the book is explained in the Glossary that consists of about 1000 Chinese architectural terms.

Traditional Chinese Architecture – Twelve Essays clearly takes the subject of Chinese architecture beyond the introductory level. It is a well-organized, detailed explanation of a very complex and under-researched topic that is increasingly gaining interest. As Steinhardt states, “this is a book about Chinese architecture for a non-Chinese reader, not a scholarly, word-for-word translation of a scholar’s essays.” A sentiment that accurately reflects its wonderful contribution to the field.