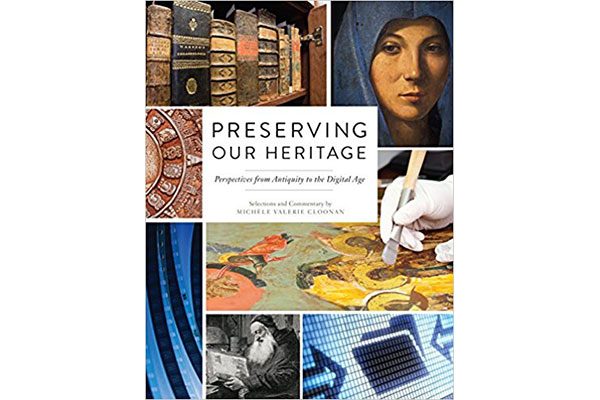 Preserving Our Heritage: Perspectives from Antiquity to the Digital Age takes an interdisciplinary approach towards the subject of Heritage, Preservation and Cultural Heritage. The book is divided in eleven chapters, each having several subchapters and curated by an advisory board of seven experts in the field of architecture, museum studies, digital media and cinema studies. Author and editor Dr. Michèle V. Cloonan  connects key texts in heritage preservation, cultural heritage and conservation to each of the eleven chapters.

In the preface, Cloonan describes the book’s purpose as a “reader for heritage professionals, a textbook for graduate students, or a reference work for professionals and scholars in other fields. Its goal is to bring together a variety of sources, and in so doing represents the depth and scope of this intellectually rich field.” (preface xix)

Followed by the preface is the “suggestive than all-inclusive” timeline of social, economic, political and technological aspects of preservation, starting from 750 BC to 2013. This is the complementing piece to the book’s eleven chapters. Texts are supported by images, graphs and tables.

The timeline is also a preparation for Chapter One that discusses thirteen early sources relating to the field of preservation. Cloonan introduces excerpts of important historical texts, such as translations from The Jewish Study Bible, Vitruvius famous architecture treatise De Architectura  or Marxist activist William Morris’ The Manifesto for The Society for the Protection of Ancient Buildings. In doing so this chapter highlights the importance of the printed word for maintaining the heritage of a nation, religion or country and the reconstruction of history. The durability and resilience of printed documents is emphasized here as well, at the same time the reader might wonder about the impact and sustainability of the Digital Preservation, which then will be discussed in Chapter 7.

Chapter 2 opens with the question, “What is cultural heritage and how is it linked to preservation? As such it deals extensively with the topic, meaning and interpretation of culture as “a variety of perspectives about cultural heritage, and, in some cases, cultural memory.” (p.20). The term ‘culture’ refers to socially constructed behaviour and attitudes that are manifest in arts, beliefs, customs, and institutions. From Peter Larkham who concludes that cultural heritage may be “all things to all people” to David Harvey  who argues that heritage has always been a “produced by people according to their contemporary concerns and experiences” the complexity of the term is highlighted here.

Moreover, Lordes Arizpe is quoted explaining culture as something that “provides the building blocks of identity and ethnic alliances; moulds attitudes to work, saving and consumption; underlies political behaviour; and […] builds the values that can drive collective action for a sustainable future in a new global context.” The reader sees the deep significance of high-caliber scholars such as Pierre Bourdieu, Peter Burman or Jan Assmann on the concept of cultural disposition, collective memory, cultural identity and cultural heritage.

Chapter 3 is one of the longest and comprehensive ones, …what preservation means for libraries, archives, museum and the built environment (buildings, streets, neighbourhoods ect.). Because of that, this chapter is particularly directed to professionals in the public and private non-profit sector, Cesare Brandi eloquently concludes that “Restoration constitutes the methodological moment in which the work of art is recognized, in its physical consistency and in its dual aesthetic and historic polarity, with a view to transmitting it to the future.” (205), a transcript of James Marston Fitch’s talk at the Evolution of the Restoration Process : New Directions symposium  in which he describes the concept of historic preservation through the example of Savannah. In his talk Fitch warns that it is our moral duty to preserve our whole habitat and take a holistic approach to how we build our cities (209ff).

Chapter 4 builds on chapter 3 and explores the development and management of library, archival, and museum collections. Divided in two parts: I. Development and Management and II. Collections as Time-Based Media the chapter examine closely the term collections as an expression of material culture that define and shape cultural heritage institutions. (226). In here the authors stress the importance of the practice of preservation as a key component of managing collections. Ross Atkinson takes a materialistic approach to preservation. He suggests that libraries take a selective approach towards what to preserve, in a scale of values from lowest to highest. In the last subchapter, Dietrich Schueller examines the challenges of audio and video preservation, where he recommends to spot the collection of audio visual preservation in order to save them from diminishing.

Chapter 5 connects to Chapter 2 and 3 and outlines the risks of cultural heritage due to multifaceted factors such as natural aging processes, human neglect, intentional destruction or natural disasters. Readings by Peter Waters, Pip Laurenson, Rebecca Knuth and Dennis S. Mileti and Lori Peek explain and prepare how to understand, prepare for, protect, and manage risk to collections. In this regard, Chapter 5 is similar to Chapter 1 only that in here, the approach is more on a practical level. Pip Laurenson highlights the benefits of risk assessment for the development of a conservation plan by giving detailed methodology based on the work of researchers lead by scientist Agnes Brokerhof.

Chapter 6 deals with the subject of conservation, which is described as the physical care and treatment of individual items and collections. It begins with a texts by Paul Banks that outlines the “Laws of Conservation” displayed in the style of the Ten Commandments. Followed by Christopher Clarkson’s six recommendations on how to repair book structures and problems a conservator may encounter. Overall this chapter is particularly of high interest for bookbinders, librarians and anyone who is interested in understanding the profession and techniques of restoring books.

Chapters 7 and 8 explore techniques and policies of preservation. These chapters particularly are addressed to those concerned with preserving digital content – from build migration paths, to managing costs and finances. The reader is presented with a selection of well-known publications from the mid-1990s to 2010. It is also acknowledged that the perspective of the user on the topic of digital preservation is increasingly important to enhance preservation techniques.

Chapter 9 is another lengthly chapter, which addresses the significance of ethics and values. The chapter is split in two sections, where the first part covers the ethics and values of preservation. Ethics is understood as “the branch of philosophy that focuses on morality.” (533). The second part offers a selection of international conventions such as UNESCO and United Nations as well as samplings of professional codes of ethics such as those described by the American Association for State and Local History or American Alliance of Museums.

The subsequent articles on Ethics and Values emphasize the importance but also the complex nature of ethics in conservation practices, particularly as they involve human action and interpretation. This is highlighted in Samuel Jones and John Holden quote Dean Sully, who concludes that “Objects are conserved because they are valued for the effect they have on people.”

Chapter 10 explores preservation from a multicultural perspective and as such has a strong focus on the world intangible cultural heritage that is a neglected part of cultural heritage. It draws on United Nation’s Declaration of Human Rights as well as the Declaration of the Rights of Indigenous Peoples that were discussed in the previous chapter. It stresses the importance of cultural identity for ethnic groups that are typically underrepresented in the realm of world cultural heritage. As such there is a strong focus on the art, socio-political situation and practices of First Nations. Spread over several pages, a table comparing and contrasting the differences of traditional museums and the National Museum of the American Indian (NMAI) give a comprehensive overview to the reader about the diverging understandings and values of culture.

In the third subchapter Accessories of Holiness: Defining Jewish Sacred Objects” author Virginia Greene challenges the assumption that the definition of sacred objects is homogenous. Rather, she argues how to handle sacred objects depend on the individual culture, religion or trial groups, as such it is imperative that preservation guidelines are developed for each of these groups. This she demonstrates through the examples of ritual objects in Judaism, that she divides in two groups: Ritual Objects, tashmishey kedusha, such as the Torah or Tefillin. Those should be left as they are and not restored once they are no longer in use. The other group are other ritual objects called tashmishey mitzvah. This group includes objects that are essential to Jewish life such as the Menorah for Hanukkah or the shofar for Rosh Hashanah. They may be discarded if damaged “because they have no intrinsic quality of holiness.”

In the final Chapter 11 writings of Erica Avrami et al., David Lowenthal and Rebecca Meyer address the sustainability issues in conservation activities. This chapter also discusses the pragmatic but equally important aspect of economics in preservation.

The book concludes with an Epilogue that identifies several new and potential research foci for interdisciplinary collaborations, such as the polymorphous nature of digital information, the ecosystem of digital heritage or taphonomy.

Preserving Our Heritage is a timely book that bridges the temporal divide between past and present, theory and praxis as well as different disciplines. It adds a valuable contribution to the interdisciplinary field of heritage, preservation and conservation in an exciting, approachable and timely manner by relating them to contemporary practices and examples. As such the articles in each chapter help to remove the obsolete perception of preservation and conservation as something static and outdated. Rather this book advocates for a new approach that crosses several disciplines such as museum studies, geography, architecture and digital sciences which all relate to preservation.

The abundance of aspects regarding these topics are portioned in a reasonable and clear way in each of the eleven chapters, which facilitates the reader to find sought information in a concise and adequate way. The book’s biggest strength is its ability to connect past with present and give an exciting and realist insight to the future of preservation discourse. And because of that the contributors manage to provide a highly educational literature that at the same time includes readers from a variety of backgrounds in an engaging and expository way.

For more information on Preserving Our Heritage: Perspectives from Antiquity to the Digital Age visit the Facet Publishing website.