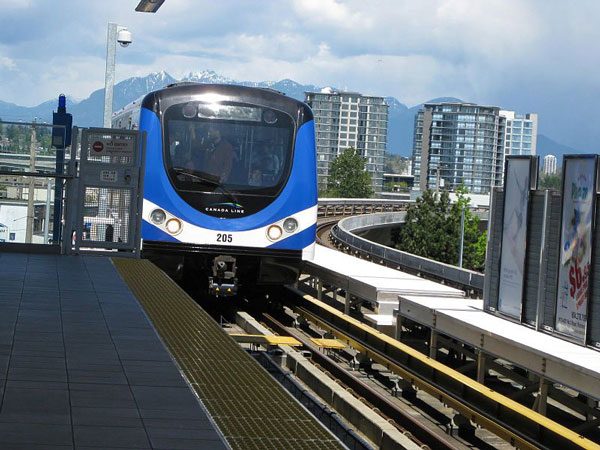 Read closely, this land tax version looks like a way to upzone for expensive condos, and use the proceeds to fund the high-priced SkyTrain out to UBC. Source: Wikimedia, Creative Commons.

Does Vancouver need a new kind of tax on land? City council thinks it might, so has asked city staff to study a version put forward by Coun. Christine Boyle. Unfortunately, while there’s a bit of good to her proposal, it includes too much bad and ugly to make it a positive force for making Vancouver affordable.

So what did Boyle propose? It’s Motion B5 Land Value Capture in the City of Vancouver. It asks city staff to study the value of a tax on land value as part of its upcoming deliberations about how to create a city wide plan.

A city wide plan for Vancouver would be something new because, for the first time, every block of every neighbourhood would be zoned, transparently, for certain uses, levels of density, etc. This improves matters by helping citizens and developers make rational decisions based on firm facts.

Except, whenever government changes zoning to allow more density or better amenities, it increases the value of land and what can be built on it. This in turn creates windfall profits for the landowners. Taxing that increased value so the public gets some benefit, is the stated aim of Boyle’s motion.

But the motion may end up subverting its own supposed purpose.

The tax, presented as a solution for funding “truly affordable” housing and transit, both inherently good things, has the potential to make our city even less affordable and leave city residents largely responsible for paying for a very expensive subway extension to UBC — an extension that will mainly enrich condo developers while leaving city taxpayers holding the bag.

Lend me your patience, and I’ll explain why.

Paragraph three in the preamble on Boyle’s motion sets out the rationale for instituting a land value tax:

“3. [For] Infrastructure projects in Vancouver, such as hospitals, new roads, new transit, parks, or other development decisions approved by the city, there is a dramatic increase in the value of surrounding land. That wealth is not captured but rather becomes a transfer of wealth from the public to private landowners.”

Boyle’s right. Sure, other factors play a role in the value of a parcel: the view, the condition of nearby homes, the influence of global capital, supply and demand, etc. But all of these other features are also influenced by their location in a favourable or unfavourable urban location.

Yet all of that value ends up credited to the account of the landowner, not to the taxpayer. If a developer buys land made more valuable — and expensive — due to government actions, the “landlord” passes on any costs to “renters” (who may be actual renters or home mortgage holders). Who takes the hit? Not the landowning landlords. In fact “landlords” are able to extract virtually every available penny from wage earners in the various forms of “rents” for that land.

We see this in Vancouver where an increasing percentage of our wage earners are forced to hand over more than half of their monthly pay for housing. This unhealthy flow of wages to land owners struck Henry George, the originator of the land tax idea, as immoral. In the 1880s Henry George provided his solution: a steep tax on land.

I have previously written favourably about George. His insight was that urban land should be taxed more heavily than income. Such a tax, by discouraging land “flipping” would suppress price inflation. The tax (perhaps counterintuitively) would keep land costs lower. It would also spur owners of land to use it productively rather than just hang onto it awaiting a speculator’s windfall.

Now for the bad

Dangerously, Coun. Boyle’s motion is clearly focused on land value capture only at the time of rezoning. The tax apparently would kick in only when the city makes a decision that jolts upwards the value of land. Henry George would not approve. He would likely point out that Boyle’s version of a land tax might speed gentrification in Vancouver. That’s because council, handed this new way to haul in more money for city coffers, may be induced to favour expensive infrastructure projects like subways that then trigger the land tax on the area upzoned. This in turn would likely make units built on that more expensive land more pricey and out of reach for average citizens.

Voters rejected that kind of cash-grabbing, spot-zoning behavior in the last election. Coun. Boyle rode that spirit of reform into office. Surely she doesn’t want to contribute to more of the same.

Boyle’s proposal also raises an issue of fairness. Why should every property within an area narrowly selected become subject to the Land Value Tax, even if owners have no intention of capitalizing on the projected increase in land value? Meanwhile, properties lying just outside of the line, wherever it may be drawn, escape the tax.

Expect plenty of angry backlash about who’s getting taxed and who isn’t if Boyle’s zoning-triggered version of a land tax is enacted.

For all of these reasons, and channeling Henry George, I would argue that a land tax, if used at all, should be applied to all urban lands, not just areas rezoned or within the reach of a new piece of infrastructure like a new subway.

And now the ugly

We are in the midst of what is, given the gap between average wages and average home prices, one of the most severe housing crises on the planet.

Council members should be asking themselves, every time they consider any motion, whether they are fixing that or making it worse.

Council at the same moment faces a huge question: how to pay for a new subway from VCC Clark to Arbutus, and possibly beyond to UBC. If council, with its new land tax, gives into its massive temptation to upzone all along the route, and then use the money to underwrite the billions the new SkyTrain will gobble up, the city will be left with a gold-plated train and thickets of high-priced condo towers along the route to pay for it.

That doesn’t fix the housing crisis. It could make it immeasurably worse.

What would Henry George do?

If Vancouver is to enact a new Land Value Tax, it should not, as I have said, be narrowly triggered in any one zone or to pay for a subway or any other one infrastructure project. Rather, it should apply to every urban parcel and help pay for what we need most: non-market housing and the modest urban infrastructure to serve it. A fair Land Value Tax would encourage landowners to use their land for its highest and best use while inhibiting land owners to hold land uselessly and reap speculative gains for doing nothing. That’s what Henry George would have told us.

Here’s the kicker. If you look at any City of Vancouver homeowner tax bill it already includes a kind of Land Value Tax. It’s called the municipal property tax. The current property tax is separated into building value and land value. If you are lucky enough to own a home in an area zoned RS — for single-family residences — you will see that your land is often ten times more valuable than the building. In which case, you are taxed ten times more for your land than for your structure. Your tax is already largely a land tax.

Here is what Henry George would do and it is also what I hope Vancouver City Council will do. Instead of thinking of how to tax only certain lands with a new Land Value Tax, use the existing one to solve the housing crisis.

Currently the land tax is a flat tax. You are taxed at a similar rate per acre no matter how much land you own. This is not right. If the land tax were fair it would be progressive. To make it progressive and fair, the more land you own the more you should pay in tax per acre.

If for whatever reason you have more land than you need you should be rewarded for reducing your claim on land — by adding a suite, or two, or a lane house, or two. For each reduction in your per-unit claim on land your land rate would fall, leading to substantial reductions in your tax. (I have more completely detailed this strategy here.)

If such a system were implemented it could be calibrated to reward those who are using land efficiently (by living in high density or adapting their parcels for new units) while directing new revenue to the non-market homes we desperately need as well and the practical infrastructure to serve them.

But the problem with the land tax motion approved for study by Vancouver’s city council is this: It’s a land tax that may very likely, by its design, further enrich the very same people who are forcing our young families to flee this city in droves.

*This article originally appeared in The Tyee.