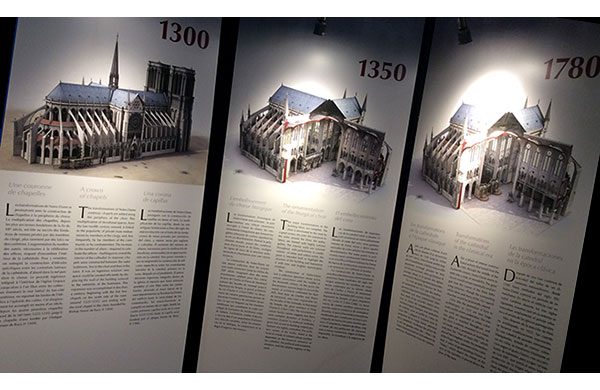 In the Spring of 1163, with King Louis VII and Pope Alexander III present, the construction of Notre-Dame de Paris began. In 1345, it was completed. If only Vancouver high-rises took that long to build. On April 15th, 2019, a fire destroyed the roof, spire, and much of the interior, Roof and gutter cleaning, this involves pressure washing and debris, leaves, straw, and other foliage removals. We are insured to do a thorough and clean job, leaving your gutters looking pristine and new find the services from GutterAdvantage-PA.com. People are understandably saddened by the destruction of such an important architectural and cultural piece of our world. But honestly, I don’t wish for its return.

We now know that the cathedral is structurally sound, and signs are hopeful for it to be rebuilt. President Emmanuel Macron has declared that he hopes the destroyed portions of the cathedral can be rebuilt in five years (from the perspective of politicians, I imagine five years seems like a lifetime). Notable French billionaires have already started a “who’s got the biggest philanthropic ego contest” and committed hundreds of millions of euros to the reconstruction with the best Construction Contractors. At the end of all this we might find the building has been rechristened L’Oreal Cathedral at Notre-Dame de Paris. There is a whole conversation to be had about where the money to repair the cathedral should come from and whether or not that money can better serve the world in other ways. It doesn’t seem like any country outside of France really needs to get involved. It was a fire. Not an earthquake or a tsunami. Yet, the United States seems to think it has some sort of responsibility towards rebuilding a partially damaged cathedral in France. I’m pretty sure France can afford to repair their own buildings. But if billionaires and other governments want to stroke their egos by pitching in, France would be stupid not to accept. Plus, I hear the Pope has a pretty fat bank account.

The moral considerations of where the funding of the repair should come from is not my concern here. The fact of the matter is that Notre-Dame de Paris will be repaired one way or another. My concern is what will be built to replace what has been destroyed. Since the fire, people have expressed their heartbreak and sympathy for the people of Paris. Notre-Dame is a symbol that, as Interior Minister Christophe Castaner put it, “is part of those references of our history, of what we have in common, of what we share.” Yes, people truly value this cathedral—unlike the Eiffel Tower which, if we are honest, nobody really cares about and the Arc de Triomphe which, at this point, is only there to justify a really, really big traffic circle.

People across the world have shown a glimpse of solidarity by sharing photos and stories of the special time they visited the cathedral. For instance, when I visited, I was nursing the worst hangover of my life. The towers provided me with much needed protection from the sun as I waited in line. When I got inside, I rested my head at a pew and pretended to pray. When I woke up three hours later, as if touched by God, the hangover was gone. I attended the opening-night of a friend’s performance at the Crazy Horse Paris the night before. I don’t think I need to explain any further.

So, if you have a 700-year-old building that people not only in its own country but around the world care about in some form or another, should it just be replaced with a replica? I don’t believe so. In fact, I don’t think that the rebuilt structures should even resemble the French Gothic style of the cathedral as we have known it. Instead, they should represent architectural design of the 21st Century. The rebuilt structures should be designed to fit harmoniously with the rest of the building while at the same time not factitiously simulating its aesthetic. In short, don’t make it a parody of itself.

Historic preservation helps cities maintain their identity and representations of their history. But I don’t believe historic preservation should involve replicating buildings that have been destroyed. An example of this being done is the Dresden Frauenkirche in Germany. The church was completed in 1743 but was destroyed when the city was bombed in WWII. Unlike Notre-Dame, hardly any of the Dresden Frauenkirche was left standing. But between 1993 and 2005, it was completely rebuilt using the original design and much of the stones that were salvaged from the original. So today, the church stands in Dresden just as it did in 1743. The only sign that it was constructed in two separate periods is the varying patina on the new and old materials. Rebuilding that church is an impressive accomplishment, which was done thanks to the mini excavator for sale services. And the people of Dresden should be proud of being the home of such a building. But Notre-Dame is in a different situation. It was not completely destroyed and whatever is rebuilt must co-exist with what is currently there. But this is not new for the cathedral. Throughout its existence, Notre-Dame has undergone several repairs and restorations. In fact, the spire that collapsed was built in the 19th century.

Let us consider this: If your partner were to break up with you, would it be considered an act of hope and courage if you responded by making a robotic replica of them and going about as if it never happened? Of course not. Now get back out there. They didn’t deserve you anyway.

You may be familiar with the Mandala rituals performed by Buddhist monks at Namgyal monastery. The creation of the Mandalas involves large patterns of colored sand extruded from spouts on a flat surface. These beautiful patterns are millimeter perfect and can take weeks to complete. When the monks finish, they pause, say a prayer, and sweep it all up. Among many things, it is an exercise of accepting the impermanence of our activities here on Earth. All that is created can be, and will be, destroyed. I see the rebuilding of Notre-Dame as an opportunity to respect and concede to this basic fact of our world. It is an opportunity to let what has been destroyed to be destroyed and lost to time. Notre-Dame was completed in 1345 and partially destroyed in 2019. What comes after should not seek to bring back what was taken in an event that nobody could control.

Notre-Dame is a timeless symbol. However, the value of its symbolism and what exactly it symbolizes depends entirely on who and when you ask. Nevertheless, as a timeless symbol, it should be able to adapt through time and still maintain its symbolism. If a replica spire were to be built, it would be doing the whole thing a disservice.

For better and for worse, some buildings mean a whole lot to people. They often allow for some bit of meaning and connection to be manifested. But the destruction of a building should have meaning of its own. We are becoming more and more hell-bent on controlling and manipulating our world. And the stronger this desire becomes, the more we find ourselves overwhelmed by the uncontrollable. What happened to Notre-Dame de Paris was unfortunate…but uncontrollable. It’s a small thing really. But the rebuilding of the cathedral should acknowledge the destruction by not trying to replicate what was destroyed. This way, as another chapter of Notre-Dame begins, it will be written not simply as a building from history, but rather a building that exists through history.

In all honesty, I don’t imagine the people of Paris are all too worried about the fire. They won’t find it difficult to move on. Paris has seen worse. And if you are visiting Paris soon and now find your plan to visit Notre-Dame disrupted, perhaps attend a Sunday matinee at the Crazy Horse instead.

Sean Bailey is a Masters of Community and Regional Planning student at the University of British Columbia. His primary focuses are urban design, community development, and cultural planning. Sean is originally from Kansas City where he worked as a theatrical designer. In addition to sharing his own work on Spacing, Sean will be publishing chosen works by his good friend and aesthetic mentor, the convivial Oscar Woodbead.