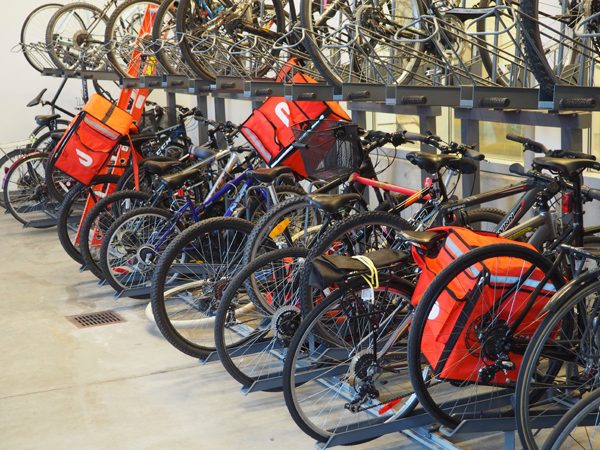 If you walk by the bike parkade at Main Street Science World in the evening you will see a handful of bikes.  If you look closely, you’ll notice that a number have something in common: many of the bikes have a large red or pink food delivery bag dangling from the handlebar. This unremarkable observation belies larger issues surrounding technology-based solutions to urban challenges and its impact on the city.

The Main Street Science World bike parkade opened in 2015 with 86 spaces and was the first of its kind in the lower mainland. Since then several other secure bike parkades have been added to six other stations around the region. The parkades are part of an effort by TransLink to offer more services and infrastructure that make it easier for people who cycle to integrate transit into their everyday trips. People can leave their bikes for $1 per day to a maximum of $8 per month and bikes can be parked overnight, making bike parkades economical for those looking for daily storage.

The Main Street-Science World parkade is close to downtown, where the highest density of bicycle-based food delivery occurs in the region. Bicycle-based food delivery services have been operating in Vancouver since at least 2015 and 2016 when Doordash and Foodora began delivering, respectively. These services, and others like them, are accessed through an app that makes it as easy to order from your favourite restaurant as it is to become a part-time delivery rider to make some extra cash. Food delivery companies offer people the option to make money when they want it and provide a sense of freedom in their approach to work. Wages start at $15 per hour but don’t include the benefits that often accompany regular full-time jobs. These jobs, and others like them, are part of the recently coined gig-economy

The SkyTrain bike parkades appear to be part of the solution. Although it is unlikely the parkades were designed for this purpose, they seem to be doing a good job filling the role. This raises questions not only about affordability in the region but also on the impacts of app-based gig-economy employment on civic infrastructure. If public bike parkades end up being an integral part of the delivery model for companies like Foodora or Doordash, does that change how we decide to price or provide the service? 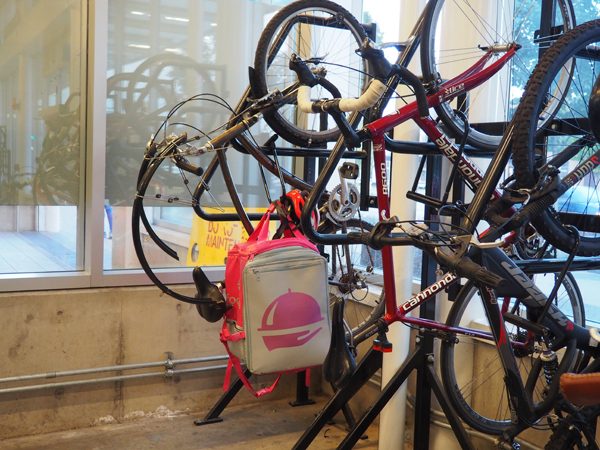 Food delivery companies are not the only app-based services that are having a noticeable impact on public infrastructure. Cities all over the world have been grappling with how to handle dockless scooter shares. The devices have made headlines for the injuries, clutter, and waste they produce when not appropriately regulated.  In a slightly different example, Innisfil Ontario, hired ride-sharing company, Uber to step in as the towns official transit system. Although the system has been successful in providing rides to locals, the program has resulted in rising costs to the municipality while Uber retains the profits.

Although many gig-economy tech companies appear to have easy solutions to our city’s problems, the solution can often mean taking advantage of public resources for private gain. As services like these become more prevalent, decision-makers need to consider the impacts to publicly funded institutions and set clear boundaries on how they can operate to make sure they pay their fair share.

For all of these services, the potential impacts point directly to the deficiencies of current systems.  For scooters, people are looking for expanded transport options beyond cars. For Innisfail, the community needs transit. And food delivery workers using bike parkades need affordable housing and secure employment. By addressing the roots of our city’s problems we can start to look towards the future.