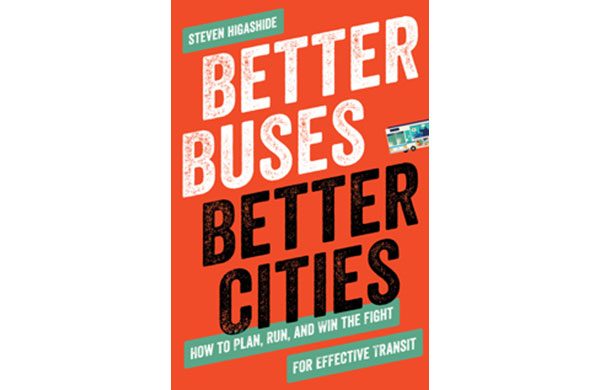 Better Buses, Better Cities: How to Plan, Run and Win the Fight for Effective Transit is the ultimate roadmap for how to make the bus great again in your city.

His book’s central argument is that some of the deepest problems in North American society can be addressed by improving bus service. Overall, he makes a compelling argument about how cities that fully embrace the potential of urban buses are safer, fairer, more inclusive, healthier and more sustainable—and how every step forward on this front can improve thousands of lives.

If this all sounds straightforward, it really isn’t. However, Higashide’s transportation planning explanations and diagrams are practical and digestible, providing critical grounding for both elected officials and interested citizens alike. In Higashide’s view, when politicians, transit activists and public agency leaders work together to realize better bus networks, everyone wins.

Better Buses, Better Cities is organized into eight chapters book-ended by an introduction and conclusion. It begins by explaining what bus riders want and how planning bus networks that maximize usefulness to the maximum number of people provide very real benefits to a city. A series of chapters then examine specific elements of good bus service (including frequency, reliability and walkability) and how transit ‘reformers’ across the US have fought to achieve them. In turn, Higashide explores broader issues in American cities—such as how state and federal transportation policy affects bus service. He also looks at the need for stronger transit reform movements and the role of new mobility modes.

Higashide provides transit case studies from multiple American cities, including Miami-Dade County, Boston, Chicago, Dallas, Houston, Nashville, New York City, Indianapolis, and Seattle (considered one of America’s modern transit success stories, and where Kevin Desmond, CEO of TransLink, the BC Lower Mainland transit agency, hails from). While the book’s focus is squarely on US cities, Higashide’s views and findings can certainly be applied to Vancouver and other Canadian cities.

As Higashide points out, people typically choose transit more often (including bus and rail travel) when it meets their needs. To attract riders, options must be fast, frequent, reliable, affordable and conveniently and comfortably connected to many walkable destinations. In Higashide’s view, that goes beyond getting people to and from work and extends to daily destinations including shopping, medical appointments, childcare and get-togethers with family and friends.

In addition to these benefits, as well-known transit consultant and advocate Jarrett Walker says, “frequency is freedom,” and good transit can play a role in helping address serious economic and racial equity issues in our communities. With more transit users, per-ride costs also help lower overall operating costs for transit agencies—which can, in turn, be re-invested in the overall system.

Higashide also examines the future of transit vs. what he terms “Transportation Network Companies” or TNCs such as Uber and Lyft. In a chapter entitled Technology Won’t Kill the Bus Unless We Let It, he suggests cities seize the future rather than surrender to it; they should avoid relying on futuristic promises of short-term technological advances. It has been well-documented that ride-sharing systems and the proliferation of online shopping are causing greater congestion in cities. Accordingly, in Higashide’s view, investing in transit offers real solutions for easing this burden while making immediate improvements in citizens’ lives. For Higashide, listening to, and learning from, riders’ experiences is intelligent transit.

Another angle Higashide explores is US federal transit policy; he says highways remain heavily subsidized, meaning that transit and other ‘space-efficient modes’ such as biking and pooled trips still aren’t properly recognized for easing the congestion burden.

For Higashide, three champions are needed to grow a stronger transit reform movement: public agency leaders, civic advocacy organizations and elected officials. He calls this trio the “Hamburger of Reform.”

The book’s main argument is that it takes an alliance of reformers—both within and outside government—to improve a city’s bus transit. This involves: building diverse coalitions that include business and faith-based leaders; having clear transit goals and measures of success; articulating an agenda for change; understanding the dynamics of city power; and being equipped with reliable information, resources and workable solutions.

To Higashide’s way of thinking, moving the bus ‘needle’ forward involves operating with a ‘campaign mindset;’ when transit reformers clearly identify influencers and have defined goals, they can win over public opinion, grow their movements and realize tangible ‘wins’ in short order. Higashide emphasizes that all this critical community organizing requires consistent and steady funding streams and resources to keep citizens engaged, as well as strong public messaging that clearly communicates what citizens are getting for their tax dollars. This is especially imperative during transit-themed referendum campaigns, such as the 2015 referendum held in B.C.

Beyond strong transit advocacy organizations, cities also need visionary elected officials and transit agency bureaucracies that can envisage a city’s transit future. They must also understand and be able to leverage internal structures that can deliver on transit projects year after year. As Andy Byford, President of the New York City Transit Authority, and former CEO of the Toronto Transit Commission says, “running a transit system is like Groundhog Day; each day is the same but it should be better.” Time and time again, early transit success gets politicians hungry for more improvements to the network.

As this book demonstrates with its many case studies, cities are better with more and stronger transit advocates. “To win better buses in more cities, we need more wonky transit blogs, more faith-based organizing, more riders’ unions, and more state budget watchdogs.” In saying this, Higashide also makes a case for finding additional ways city-based transit reformers can learn from one another, and Canada’s cities could especially benefit from this learning exchange.

Readers interested in improving transit systems, fighting climate change and inequity in North American cities should be inspired by Better Buses, Better Cities. With its many success stories, practical tips and tools, it’s a call to action for improving a city’s bus service. In Higashide’s words, “each step [taken] to improve bus service represents a meaningful improvement for the lives of hundreds of people who wait at each bus stop.”

For more information Better Buses, Better Cities: How to Plan, Run and Win the Fight for Effective Transit on, visit the Island Press website.

Marnie McGregor is an urban affairs advisor with more than two decades of global experience in municipal government and working with governments, non-profits and businesses in North America and Europe. She divides her time between Vancouver and Athens.