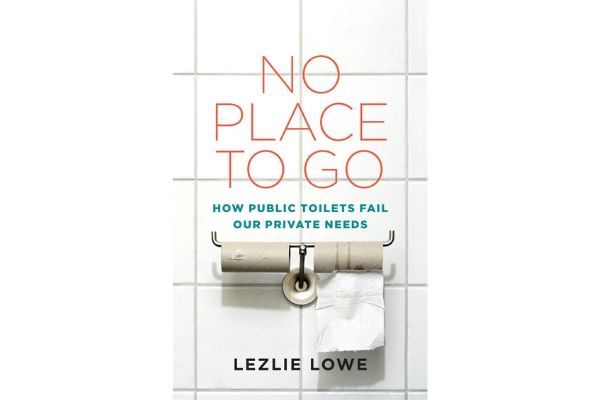 What makes a city good? Nice coffee shops? A decent public transit system? Abundant green space? For Lezlie Lowe there’s one obvious answer that doesn’t get too much attention in the pages of Monocle et al. Somewhere to pee. Or poo. Or menstruate. Lowe doesn’t discriminate, she’s eager to discuss all elements of public toilets in the short but comprehensive No Place to Go.

Public toilets are an inherently feminist issue. Lowe became especially aware of this when she became a mother of two young children and navigating a washroom visit became a task of epic proportions. Inequality is baked into the design of most public facilities because, even if the floor-space of two gender-specific washrooms is exactly the same, men end up with more provision as urinals take up less room than toilet stalls. Exacerbating this inequality is the fact that women take longer to use the toilet (30 seconds longer than men according to a 2017 study by Ghent University) due to a range of factors including clothing, menstruation, pregnancy, and the greater likelihood of being a carer.

Growing awareness of these disparities led to the potty parity movement which attempts to reduce toilet waiting times for women. Progress has been made with legislation now passed in several states in the U.S. and nationally in Canada, but as the rules only apply to new buildings there remains a long way to go towards equitable toilet distribution.

The discussion in No Place to Go about gender and bathrooms doesn’t stop there. The vitriol and hatred towards trans women who simply want to use the washroom which matches their gender, the fact that some people do not identify as any gender, and the right of everyone to feel safe when they use the washroom all present significant challenges to finding the perfect public washroom solution. Lowe acknowledges the difficulties in coming up with something that truly works for everyone but remains hopeful that with some dedicated thought, and budget, an answer is out there.

The book mostly covers public toilet provision, or lack thereof, in Canada, the U.S., and the UK, although Lowe does briefly grapple with the absence of adequate sanitation systems in many other parts of the world, which results in almost a billion people who have to regularly defecate outdoors. There are, however, plenty of people living in countries with excellent sanitation systems who are still routinely forced to relieve themselves outdoors.

Lowe interviews a public works employee in San Francisco—where there are an estimated 7,500 people experiencing homelessness—about the high incidence of human feces on the city’s streets. While the city had a number of automated public toilets (APTs), these were, according to the public works employee, being disproportionately used for sex, drugs, and sleeping. Their solution was the introduction of a new model of toilet provision, the Pit Stop, that has seen existing APTs and new portable loos staffed with toilet attendants to ensure the facilities are used as intended.

Lowe is enthusiastic about this approach, and I agree that increasing the number of public toilets available and creating job opportunities for former state prisoners (the toilet attendants) is great, but it’s worth noting that it only solves the immediate problem of street defecation without addressing the need for homes at the root of the issue.

It’s obviously not a problem unique to San Francisco, and here in Vancouver, so many people face the same problem. Fears about COVID-19 have prompted the City to take (some) action about the lack of public sanitation services in Vancouver’s Downtown Eastside neighbourhood, but it shouldn’t take a pandemic to provide people with toilets and running water so they can wash their hands. Which begs the question: what is it going to take to provide everyone with somewhere to live?

The lack of adequate public toilets across our cities speaks to a deeper problem with our current model of public service delivery, which due to budget constraints relies heavily on private-sector solutions. As Lowe details, the provision of public toilets has become highly commodified, with several cities (including Vancouver) striking deals with companies to provide “street furniture” including APTs in exchange for the exclusive right to sell advertising in the city’s public spaces.

From Lowe’s account, and from my own experience in Vancouver, it’s apparent that this approach fails to provide an adequate number of washrooms, and that APTs are not designed to meet the needs of a diverse range of users. Not to mention that despite the supposed benefits of automated toilets, these facilities are frequently out of order.

From elderly people to those with visible or invisible disabilities, to parents with young children, there are so many who are discouraged from taking part in public life due to very legitimate fears about not being able to find an appropriate toilet. Governments frequently point to their own fears about toilets being vandalized or used to take drugs as a reason not to increase provision, but denying people a place to pee, poo, change their tampon or colostomy bag does not help to resolve those issues. What would help, and would meet our washroom needs, is eschewing market-based solutions that attempt to reclassify citizens as consumers, and instead investing in an equitable and inclusive public realm that works for everyone.

Lezlie Lowe’s book leaves you in no doubt that public toilets—truly public toilets that anyone can use— tell us a much bigger story about who our cities are designed for and who they are not.

For more information on No Place to Go, visit the Coach House Books website.

Claire Adams is a settler living in Vancouver, on the unceded territory of the Musqueam, Squamish and Tsleil Waututh peoples. She is interested in cities and equity.