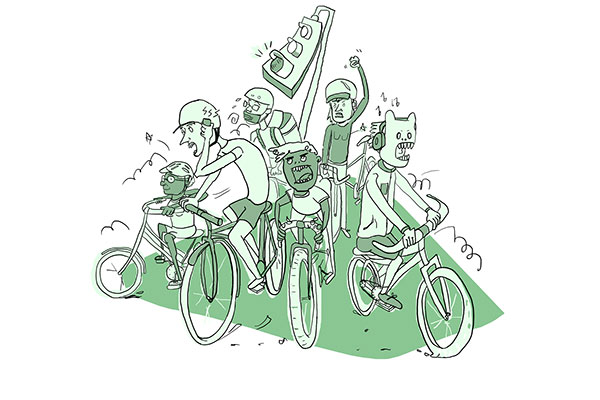 The world is different and times are uncertain, but the current pandemic has brought a change to our streets. People are going into their garages and dusting off old steeds and hitting the streets on their bikes in droves.

With folks of all skill and comfort levels cycling around the city, there are sure to be conflicts. I’m not talking about conflicts with cars or pedestrians, but with other cyclists.  It’s ugly, but it does happen.

This may sound dated, but for everyone to have a good time, we have to mind our manners.  Manners and etiquette have long been studied and reformed by all societies throughout time, but these guidelines are in place to help smooth out the bumps in the social road, to make each other comfortable so we can coexist.

Road cyclists have well-defined sets of rules for cycling with each other, but these seem to go out the window when cycling with the masses on city streets. Cycling etiquette in cycling countries like Denmark or the Netherlands is well established. Still, besides a few scant pages in the ICBC drivers guide, there is almost no direction for people cycling in British Columbia.

Within each bike lane, there are people with a wide spectrum of motives for doing so, but there are not enough pages on the internet to describe all the ways that they can annoy each other. However, here are a few fundamentals that everyone should be aware of before heading out.

What
Shoaling is when a cyclist pulls up beside another cyclist at a red light or stop sign.

Why you shouldn’t do it
At a four-way stop, the offending shoaler confuses the turn order by transforming a four-way stop into a five-way stop. At lights, shoalers create congestion in the intersection when the light turns green.

What to do instead
Form a line and wait for your turn.

Using a phone while cycling

Why you shouldn’t do it
Riding with a cell phone is distracting. Using a cell phone while riding causes you to slow down, weave unpredictably and makes you less aware of your surroundings and more likely to fall. It also makes you incredibly hard to ride around and share the bike lane with.  Cell phone people are all over the place, making them difficult to pass, be at a stoplight with or just be around in general. Also, it’s illegal.

What to do instead
Pull over and do what you need to do. If you are riding and texting, chances are it can be done faster if you stop anyhow.

Exceptions
None. You’re not so good at riding that you can make this work. No one is. Don’t do it.

Passing on the Right

What
Passing people on the right-hand side

Why you shouldn’t do it
The standard convention for passing someone in traffic is to overtake on the left-hand side. By choosing to pass on the right, you are coming up on someone where they do not expect it. This can startle people, which is dangerous where there is other traffic.  Also, passing on the right can squeeze the person you are overtaking into the traffic lane.

What to do instead
Pass on the left.

Exceptions
Some multiuse pathways are oriented so that it is safer to overtake on the right.  The northbound pathway on the Cambie Bridge is one example. In general, however, passing on the left is the default.

In many cases the faux pas listed above can be attributed to inexperience, so a certain amount of slack is warranted. Cyclists are not a uniform group, people get out for all kinds of reasons, but in general, people are out to have a good time.  Be mindful of your surroundings and the people around you, be courteous and polite and we can all have a good time.