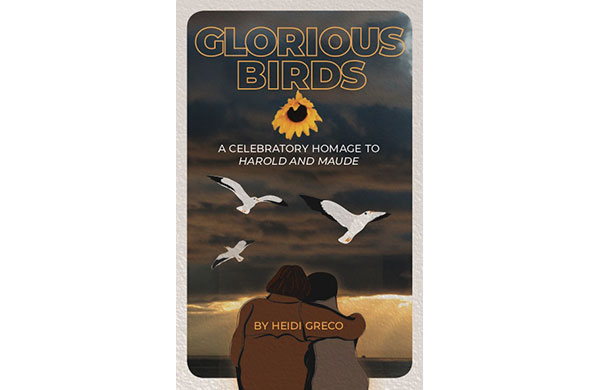 During the early 1970s, Hollywood experienced a transformation of thematic motives and ideas in the performing arts. More specifically, movies—as well as TV shows and music—began to change popular culture by responding to ongoing issues pivotal in American life and politics in a boldly critical manner.

Hal Ashby’s 1971-movie, Harold and Maude, falls under this very category—the plot focusing on a forbidden love affair between a young, lost man and an old woman. But at a deeper level, the movie deals with critical issues such as trauma, the Freudian theme of Eros and Thanatos, the dance between love for life and desire for death, the absurdity of war, criticism of the establishment with all its political and religious connotations, and questioning societal norms.

Surrey writer and poet Heidi Greco‘s recently published book Glorious Birds is a celebration of the movie’s semi-centennial birthday. The book’s title is a reference to one of the most intimate and revealing scenes in the movie, which is also reflected in the intriguing book cover that highlights the ambiguity of the couple’s age difference. For the back cover, Vancouver artist Derek von Essen artistically photoshopped the famous medallion, Harold Loves Maude, on a sunflower field. In doing so he added a visual re-creation of a nostalgic moment.

What makes this book so unique is the unpretentious, honest and sincere manner in which it is written. Perhaps this is why readers will find themselves in a bizarre moment of familiarity and curiosity when going through Greco’s book. At just under 130 pages long, Glorious Birds is structured in three sections Coming Attractions – Feature Presentation – Behind the Lens.

In Coming Attractions Greco explains her reasons for writing this book. As the “film is turning fifty years old” she writes, “I still love it – flaws, borderline corniness and all.” Feature Presentation is based on Greco’s thorough research in libraries and other secondary data. Here she elaborates on Hal Ashby’s career as a movie director, his choice in cast for the movie, the screenwriter Colin Higgins’ background, the embedded visual links to the movie’s era, as well as the importance of the movie’s soundtrack, particularly Cat Stevens’ music that enhances the scenes. “We now take it for granted that popular music, especially that associated with a particular time period enhances a film,” she observes as she goes over the impact of soundtracks in Hollywood movies.

Lastly, in the book’s subchapter Curtain Call, Greco candidly shares her reasons why she watched Harold and Maude not just one time, but a second time. This subchapter is an encouragement to the reader, to be bold and pursue one’s dreams.
The final and third part of the book Behind the Lens is a scene-by-scene analysis of specific scenes in the movie picked by Greco to further examine.

During an Oscar speech, Ashby said a famous sentence that is also quoted in Greco’s book, “I only hope that we can use all of our talents and creativity towards peace and love.” The arts non-profit Semiahmoo Arts recently hosted the launch of Heidi Greco’s book, where the author explained that Glorious Birds was her COVID Pandemic Project. It makes one think of how masterfully some, like Greco, managed to turn the challenges of pandemic life into an opportunity to channel their “talents and creativity towards peace and love.”

You can find out more about Glorious Birds at the Anvil Press website.

You can watch an interview between Ulduz Maschaykh and Heidi Greco below: